As I Was Going to Strawberry Fair...

When I decide to play catch up with all the chores waiting to be done I always seem to end up with less done than when I do nothing. That's not really true, of course, it's just that when I stop ignoring all the jobs waiting to be done, I'm very aware of what's still not done at the end of the day.

This weekend I decided to get busy with the garden, the laundry, the poem submissions waiting to go out, and some piled up administration for a magazine that I work for (unpaid), among other things.

I did take a little time out to take some photographs in the garden. As we were away all September, which is the first flush of spring growth here, it has rather got away on me.

This is the edge of the lawn I was trying to cut: 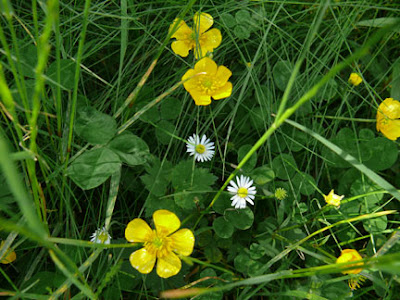 I handled the edges by digging them with a spade rather than using the mower. (Oh yes - buttercups and daisies - hence the "Strawberry Fair" reference in the title of the post) 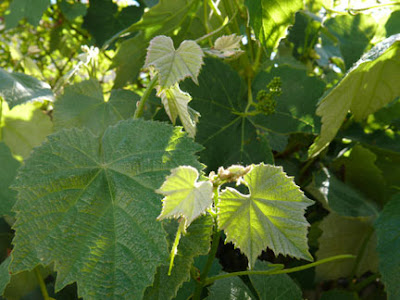 Poppies growing in the front border - I planted them in about May or June and they have done well, even though the weeds are thick around them. 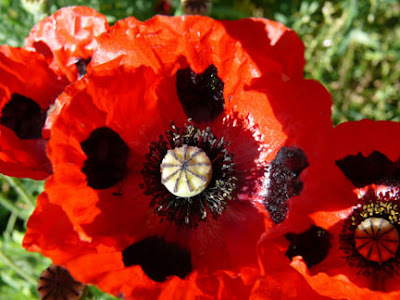 Posted by Catherine at 6:57 pm

Hi! Michelle sent me over.

Wow! Those poppies look absolutely gorgeous. I wish I had a green thumb. My mom had always been planting this or that. Unfortunately, I kill plants way too easily. Even the ones that people promise there is no way for me to kill them.

ooh - I love that poppy picture. I adore poppies - they're so resilient and colourful and cheerful.

In the UK we have the most beautiful purple poppies :-) And of course, it is still November - poppy month here in the UK.

I am so glad Michele sent me to say hello today, my dear :-)

The photos are lovely, particularly the detail of the poppies.

We had our first snow this week so it's funny to read about your garden :) I'm jealous!!

Beautiful photos - the buttercups and daisies are especially verdant - I hope you left them there! :)