Busy this week, but Helen Lowe has posted one of my poems as Tuesday Poem on her blog - Learning Italian.
Posted by Catherine at 9:57 pm 0 comments

What I've Been Reading

Every so often I come across a list on a blog, generally at the end of December or early January, titled something like "the best ten novels I've read this year". You won't find that here.I mean, who has time to read that much? Possibly, if you only read novels, there would be time to read enough - say twenty or thirty - that it would be worth picking the best ten. But my reading is not restricted to novels, there are of course newspapers, and magazines, lots of poetry books, non fiction, research related to family history, and so on.

And then there is my day job, and other pursuits like writing, sewing, playing bridge (one of the few things my husband and I do together, so I am not about to let it go), and getting out and about for some exercise and inspiration.

So - "best ten" - not so much, and as for "1001 books you must read before you die" I once calculated how many I would have to read a year, and laughed at that book title, which doesn't seem to allow any time at all for additions for personal preference, or all the books that are going to be published between now and the date of my demise, whenever that might be.

I have however read a couple of books lately that I thought worth a mention. The first, one that has often popped up in "must read" lists, and the second, one I had never heard of before.

The first novel I ever read by Rose Tremain was "Music and Silence", a historic novel which I found mesmerising. I wanted more, so tried a number of the author's other books, and was disappointed. Her modern novels don't appeal to me - I tried "The Long Road Home" - OK but not outstanding - and "Trespass" in which I found most of the characters unpleasant and unappealing, although admittedly by the end of the book they had grown on me a little. Then there was "The Colour", another historical novel, but set in New Zealand rather than Europe. Somehow, the setting just seemed inauthentic and I couldn't get into it properly because of the overwhelming sense of "not quite rightness".

Finally, however, I got round to "Restoration" and more recently, "Merivel", both of which I enjoyed enormously. And I can't quite say why these grabbed me when the others didn't. It's not that the characters are less flawed. Maybe I prefer flawed characters who are firmly in the past? Perhaps if the settings are suitably remote, I can forgive flaws as being of another time and place? I haven't come to a conclusion yet.However, I can say for those who like deeply layered, complex historical novels, these are well worth reading.

The other book which I am just about to return to the library is one that I found on the new books shelf. I knew nothing about the author - it's her first novel - but the book looked intriguing so I picked it up. And I'm very glad I did. The author is Jess Richards and the book is "Snake Ropes". Jess Richards was born in Wales and grew up in South West Scotland. The setting of the book is a mysterious island somewhere far to the west of Scotland. The inhabitants have long been isolated. Their only visitors are the mysterious tall men who come from the mainland to trade for fish and for the women's craft work, being careful not to disturb the culture of the islanders too much. The story is told in the voice of two young girls, Mary who is an islander, and Morgan whose parents have settled there from the mainland, after fleeing something dark in their past. If I had to label this book with a genre, I would say "magical realism".Morgan can talk to the dead, and the myths told by Mary's grandmother become tangled in the story so that it is not quite clear what is myth and what is real. The blurb on the back of the book reads "The day the tall men come from the mainland to trade, Mary's little brother goes missing. She needs to find him. She needs to know a secret that no one else can tell her."

It's a stunning book, highly imaginative, unlike anything else I have ever read. I highly recommend it.
Posted by Catherine at 1:05 pm 0 comments 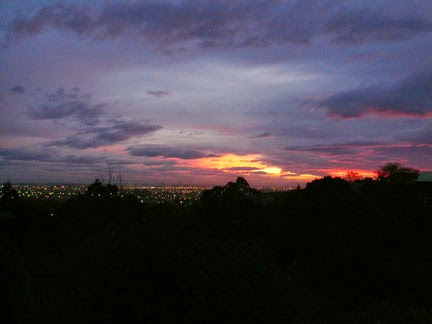 This week Carmi asked for our favourite photos. And thinking about it, I decided my favourite photo is always the one that I saw in my head, which is never quite how the scene turns out.
Being winter here, and since I have a day job, my photo opportunities are limited lately, but it seems I am a little obsessed with the sky. The above is the sunrise as seen from our living room one stormy morning (a little grainy, because there wasn't much light). For some reason, I thought of a geode - a crystal deposit inside a hollow rock, which is revealed by slicing it open. The sun seemed to be breaking through the clouds in the same way.

Tuesday Poem: The Idea of Trees

The Idea of Trees

The cherry tree has had its last revenge,
its thirsty roots seeking out a crack
in the drainpipe, prising it wider.
We call the plumber to dig up the driveway.
We think we love trees, but we don't.
We are in love with the idea of trees,
try to make them fit the confines
of our tidy suburban plots of land.
They are not tame. We are surrounded
by their amputated limbs
where we try to keep them clear
of the gutters and power lines.
Remember the peach tree,
the one that the neighbours cut down
two summers ago? First they picked all the fruit,
arrived on our doorstep with overflowing bags.
Two weeks later we were still eating,
juice dripping down our wrists and elbows,
as we savoured the fruit
of a tree that didn’t exist.

I am always uncomfortable about cutting down trees, and yet it is often very necessary in suburban gardens. The cherry tree was behind our former house. Unfortunately we never managed to get many cherries from it, even though they were delicious, as the birds were expert at getting in first. And the tree grew to tower over our two storey house, so it had to go. We also had a large plum tree in front of the house. When I revisited the area recently I found that the new owners had removed it. The front yard looks very bare to me now, but the difference in the amount of light reaching inside is amazing.

Lately, I have been reluctantly cutting down trees from our new section, trying to get more light onto the vegetable garden. There are dozens, so I'm hoping the ones I remove won't be missed, eventually. We plan to replace some of them with fruit trees, probably dwarf varieties.

All these tree cutting activities reminded me of the poem.

Helen Lowe has also posted one of my poems for Tuesday Poem this week. Visit her blog to read Blue.
And for more Tuesday Poems, visit the main hub site. 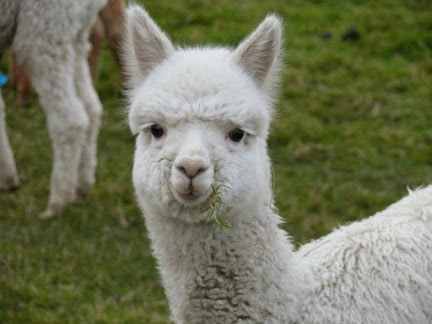 A couple of months back we took a weekend trip away. On the way back home we stopped at Adobe Alpacas for their open day, an alpaca farm run by a former work colleague of my husband. Maggie breeds alpacas for their fibre, so she is gradually culling out her coloured animals and increasing her flock of white alpacas. There were quite a few mothers and babies, including the little cutie above.

It's been a while since I took part in Carmi's Thematic Photographic. His theme this week is Critters, so it seemed like a good opportunity to post this photo.
Posted by Catherine at 10:08 pm 7 comments

Tuesday Poem: from The Bruce, by John Barbour

The Scots have just celebrated the 700th anniversary of the Battle of Bannockburn, which took place at a site very close to where my ancestors farmed for several centuries near Stirling.

A copy of this poem has been restored for the 700th anniversary of the battle. "The Brus" is believed to have been written by the Archdeacon of Aberdeen in 1375 and tells of Robert the Bruce's wars for Scottish independence.

The battle was fought on June 23 and 24 in 1314 and is relived through the 1,400-line poem. Now, a 15th century copy of the poem has been restored by a team at St John's College at Cambridge University. More information is found here.

The poem is available in a modern translation by A A M Duncan, complete with copious additional notes. (Translation on the left hand side, with the original Scots version on the right hand side of each two page spread)

The passage above runs as follows in modern English:
Ah! Freedom is a noble thing/Freedom lets a man have pleasure,/Freedom all solace to man gives,/He lives at ease that freely lives./A noble heart will have no ease/Nor aught else that pleases him/If freedom fails, for free decision/Is longed for above all else./No, he who has always lived free/Cannot well know the properties,/The anger, no, the miserable fate,/That are coupled to foul thralldom./But if he had experienced it/Then he would know it perfectly/And would think freedom more to be prized/Than all the gold there is in this world.