Tuesday Poem: Bright is the Ring of Words, by Robert Louis Stevenson

Bright is the ring of words
When the right man rings them,
Fair the fall of songs
When the singer sings them.
Still they are carolled and said,
On wings they are carried,
After the singer is dead
And the maker buried.

Low as the singer lies
In the field of heather,
Songs of his fashion bring
The swains together.
And when the west is red
With the sunset embers,
The lover lingers and sings
And the maid remembers.

I was tidying up some folders of poetry, and came across the first stanza of the above poem. A google search revealed the second stanza. The poem seems to have no title other than the first line. It has been set to music by Ralph Vaughan Williams, in a song cycle "Songs of Travel".

Robert Louis Stevenson was a Scottish novelist, poet, essayist and travel writer. He is well known for his novels Kidnapped and Treasure Island, as well as his collection A Child's Garden of Verses.
He came from a family of lighthouse engineers, but although he enjoyed his travels with his father to inspect various lighthouses, he turned away from the family profession to pursue a life of letters.
He died in Samoa, where he had settled, at the age of 44.

Our microwave was starting to make an annoying rattle when in use, so my husband decided to take it in to the repair shop to see if they could do anything with it. He came home and said that when they had finished rolling on the floor laughing, they said they would look at it.

Really, it goes very well and has ever since we bought it - which, by my calculation, was around 36 years ago. I think that the problem is that the wheels that rotate the tray are rather worn down, hence the rattle (when it doesn't stick and refuse to turn at all). Everything else works fine. I really don't want to have to buy a new one, which wouldn't last nearly so long.

It's not even our oldest appliance. Our freezer is around 43 years old, and my Kenwood cake mixer is nearly 45 years old - that has been repaired once or twice, but it still works much better than a modern one.

I often read that old fridges and freezers should be upgraded, because they use much more power than a new one. Which is all very well, but how many years would it take to recoup the cost of the new appliance in lowered electricity bills? And what about the extra resources - metal, power, transport etc - involved in making the new one and disposing of the old one? So for the meantime, I am happy with my old faithful collection of kitchen helpers. And I am sincerely hoping that the microwave comes back to us as good as new. I miss it!
Posted by Catherine at 10:18 pm 1 comments 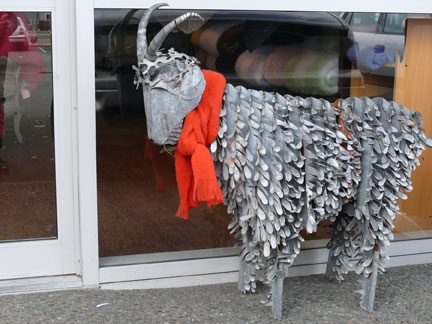 The poor blog has been rather neglected lately.I have been languishing somewhat heading into winter, not helped by an attack of shingles. A nasty blistering rash, like chicken pox but more localised (and I think, more painful).

I spotted the goat outside The Mohair Store, in a nearby suburb. His warm woolly scarf looked very appealing. Snow is forecast for next weekend.
Posted by Catherine at 10:17 pm 1 comments