Those who read my blog regularly will know that this week's topic at readwritepoem - to explore our ancestry - isn't much of a stretch for me. It seems that genealogy is a popular obsession. Recently, I've been reading Fleur Adcock's collection, Looking Back. the first half of the book is a series of poems about her ancestors. She writes of the hardships they experienced in Victorian times, in the industrial town of Manchester, and goes back earlier to discover some notable traitors and villains.

I enjoyed the poems very much. Even though these belong to someone else's story, there is enough that is universal in their lives to resonate with me. She writes not only of their lives but of her search for their lives:

What are you loving me with? I'm dead
What glad of tenderness throbs in you,
yearning back through the silt of ages
to a face and a voice you never knew?

They don't know that we know,
or that we're standing here, in possession
of some really quite intimate information
about the causes of their deaths

Some things, it seems, never change: she writes of escaping into research at the time of the Gulf War, and finding a will in which two of her long dead relations were left a sum of money annually, "so long as they follow the warres"

I've had to return my borrowed library copy. It seems it is now out of print, but you can buy it used at Amazon (rather pricey)
Alternatively the poems are included in the substantial collection Fleur Adcock: Poems 1960-2000
New Zealand readers might like to try Fishpond instead for a better price.

And now, one of my own poems - this is a fairly early one, included in our poetry group's first collection. It was written after a summer of fairly intensive genealogical research. It doesn't refer so much to a particular ancestor but to the social history of the times and place (Scotland) that they came from, and their imagined stories.

Songs and Dances of Death

What they did not know was that the curious fertility of the soil came about because they stood on an ancient battlefield. Sometimes they would turn up old bones and once, a skull. They took it to the priest for burial and returned to their ploughing. At night they told the old stories. If you had asked “Can’t you hear the dead crying out?” they would say “It’s only the wind in the wheat”

All summer I read of these things.
In my garden the weeds grew lank.
It rained often. On the path
I could barely make out a small bundle of feathers
and bones

In the museum there is a dark blue velvet
cloth. It has covered many at their burials.
As well seek them in the night sky as here
their trace as faint

It is because of their deaths that we have come

A few random Christmas observations (with photos, at the bottom):

1) The nice thing about having two jobs is that I have the "last day of work before Christmas" twice. Which meant being let off early, one day, and having a big staff Christmas barbeque the next day.

3) For last minute shopping I decided to avoid the malls and went into the centre of town, where it was surprisingly uncrowded. Although I'm told that the malls weren't as crowded as usual, either. I saw an item on TV on the recession in the US, where one "woman in the street" said she was only spending $2000 last year (as opposed to $7000 last year). Somehow I felt strangely unsympathetic. A spare $2000 would be very nice, thank you.

4) Having said that, apparently the spending in New Zealand is also down to about 75% of last year.

While I was in town I stopped to look at the Ballantynes Christmas windows. Some pictures for your enjoyment (mostly close up , because the only way I could avoid reflections was to put the camera right up to the glass) 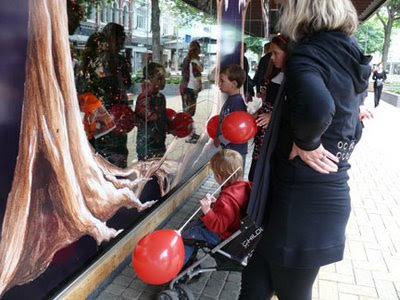 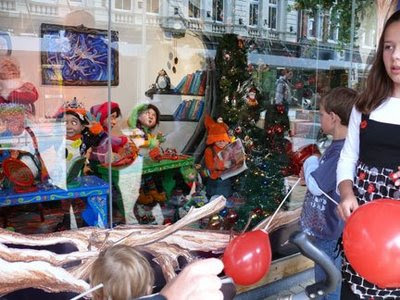 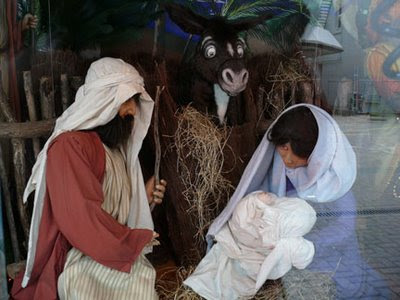 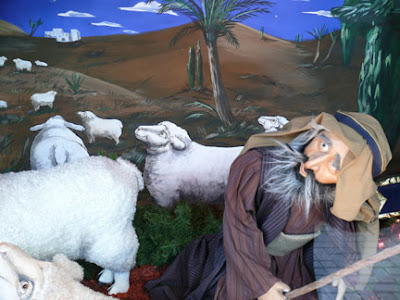 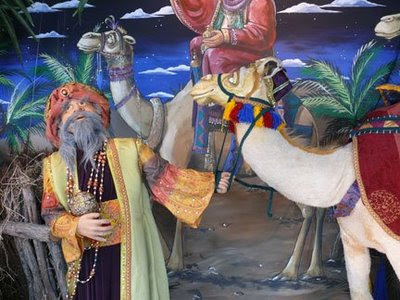 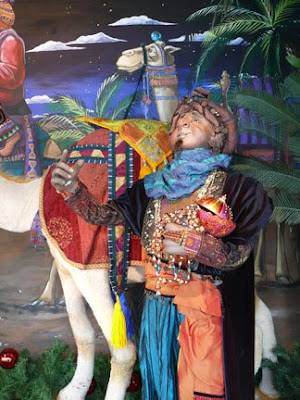 I'm always willing to give a plug to Bernadette who is not only a wonderful poet but also a gracious mentor. She willingly gave her time to edit our group's last book and has agreed to edit the next one (see my previous post)
Posted by Catherine at 10:20 pm 1 comments

Hot off the Press 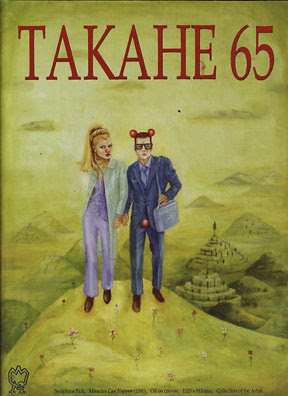 The latest issue of Takahe magazine, which has three of my poems in it.

Yes, I see it first because I am on the staff. But only on the administration side ie finances, subscriber database etc. I do have faith in the ability of the editors to select work on merit.

Now, I just have to make time to write more poems, and send out more submissions. I have gathered a fat folder of possible publications to submit to. Just haven't done it yet.

In other news, the small poetry group I belong to (the Poetry Chooks) were successful in obtaining a grant towards publication of a second collection of our work - to include paying an established poet for editing and workshopping. So, 2009 should be a good year for writing.
Posted by Catherine at 9:57 pm 4 comments

It's Thursday, Time for a Poem

Over at readwritepoem, the theme this week is panegyrics - poems in praise of a person.

This poem is not exactly a panegyric, but it does include affectionate references to several local poets. That's about as close as I usually get to high-flown praise. I've had this one gestating for a couple of weeks or so, since my recent road trip to Dunedin. It's still very much a first draft.

Driving South in the Company of Poets

Every small town and village labelled,
every trickle of water, as if
the land is a map of itself.
Dogleg Stream, Muddy Creek,
Flagswamp Culvert. All these words
begging to be harvested
some of them claimed already
Rhian at Saltwater Creek
Jim at Blueksin Bay,
Bernadette and Joanna at Seacliff,
the old asylum nearby
greataunt Jane unvisited
for quarter of a century
babbling like a Chinaman
and if she had poems in her
no one could tell.

The poets/poems referred to are as follows:
Rhian Gallagher and "Saltwater Creek"
James Norcliffe and "Along Blueskin Road"
Bernadette Hall and her poem "Shaddai" which is set at Seacliff, and includes a conversation with her friend, painter and poet Joanna Margaret Paul.
Seacliff is the site of a former lunatic asylum. My greataunt Jane who was developmentally disabled lived at home for 30 years until her mother died and her sisters could no longer cope, she was then admitted to Seacliff where she died nearly 25 years later. The phrase "babbling like a Chinaman" comes from her hospital file which makes rather sad reading.

She had fallen into a fire and been severely burned as a child, and also had diptheria at the age of five. I can't help feeling that with modern medical treatment she would have fared a great deal better, perhaps been educated at least to a degree, and certainly would not have been classed as a "lunatic".
Posted by Catherine at 7:20 pm 7 comments 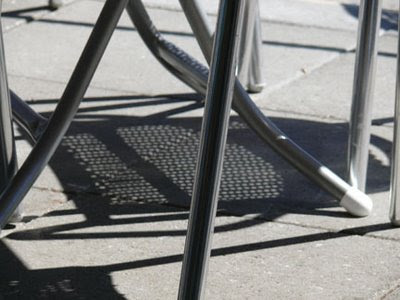 (And if you are inspired to take part, please tell Carmi I sent you).
Posted by Catherine at 6:16 pm 5 comments

Oamaru is a town that takes its Victorian heritage very seriously. Not only do they have a festival in November every year, but in the historic precinct of town, there are a number of businesses where you can get the flavour of Victorian life all year round.

Most of the action at the Victorian fete was in the street stalls and entertainment, but I also ventured inside some of the shops - we bought lunch at the bakery, visited this traditional bookbinder 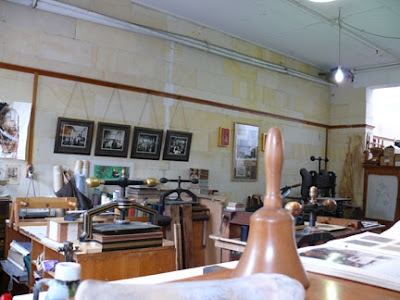 the Grainstore Art Gallery, which is like no other art gallery I have ever seen 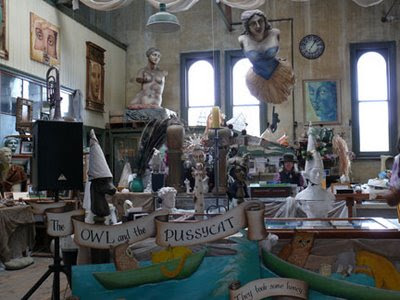 and the secondhand bookstore. 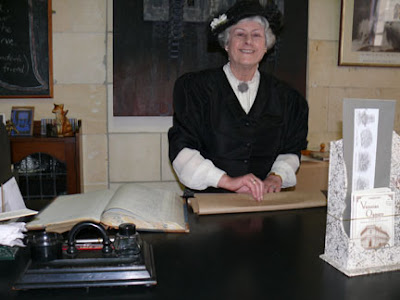 The proprietor is wrapping my purchase (a book of Scottish poetry) with brown paper and string, after entering the details by hand in a large leather bound ledger. She wears Victorian dress all year round. The business does, however, make one concession to modern life - an EFTPOS machine.
Posted by Catherine at 10:51 pm 1 comments 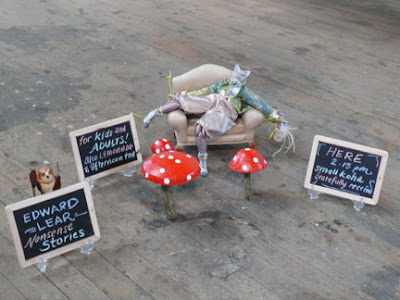 I came across this tiny installation on the floor of Oamaru's Grainstore Art Gallery, during the Victorian Heritage Festival. I was too busy absorbing all the events of the day to come back for the Edward Lear readings, but I think it would have been fun. And I thought this was a delightful way to advertise it.

"Koha" is a Maori word meaning I think gift, in other words a donation.

This is another photo for Carmi's Thematic Photographic theme, sweet.
Posted by Catherine at 10:46 pm 3 comments

December already! One of the tasks I got done at the weekend was to bake our Christmas cake - a rich fruit cake with a glass full of brandy poured over as it cools. Later it will be iced with almond paste and royal icing.

Traditional Christmas food doesn't really fit well with the New Zealand climate - traditional British Christmas fare, that is. The whole roast dinner, plum pudding with coins in it, brandy sauce blazing full-on midday meal on a day that is quite likely to be hot and sunny (but not always!). I don't care. Every year, recipe supplements in newspapers and magazines offer all sorts of suggestions for festive summer Christmas menus. The problem is that nothing about them says Christmas to me. If it's not the same meal every year, with something about it that we just don't have on any other day of the year, then it's just a festive meal that we could equally well serve on any other special occasion - a birthday, say, or wedding anniversary.

I think my children feel the same about tradition. One of our family traditions is to put out Christmas stockings. When the children were small, it was our way of keeping them busy with little treats while Mum and Dad enjoyed a lie-in. Then the bigger presents came later. Also, I felt that if Father Christmas filled the stockings, and the bigger presents came from Mum and Dad, it was easier to understand "we can't afford that".

Now they are grown up but they won't give up their Christmas stockings. So last year with budgets tighter, I suggested that everyone buy one item for each other person's stocking. That seemed to add to the fun.

When they were small, they could be filled very cheaply with crayons, balloons, children's scissors, and the like. I grew tired of running out of sellotape, so I started putting a reel of sellotape in each child's stocking, then they all had their own. Eventually we had such ample supplies of sellotape that I left it out one year. My daughter complained. "It's tradition", she said.
Posted by Catherine at 10:45 pm 6 comments