For readwritepoem
The prompt this week was to write poetry with a limited word set, for example using the words at Shufflewords.

Usually my poems start with an idea. This time I decided to just select words that I liked the sound of, and play with sounds more than trying to make sense. As I said, I'm not very practised with magnetic poetry. Usually I get diverted enough sorting the words into alphabetic lists of words of the same length that I run out of time to actually use them!

Here is the result: 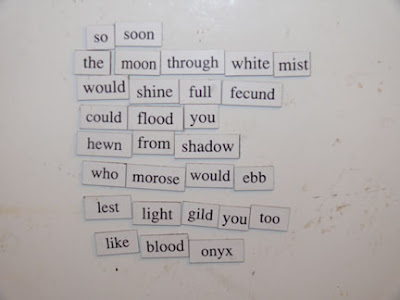 It was the end of an era as we celebrated my youngest son's 21st birthday. All my five children are now officially adults, which makes me feel rather old. Or at least, I still feel the same age I always felt, so how did it happen exactly?

Of course several of them still live at home, they know where it is cheapest!

We had a party with buffet dinner at our home last weekend, which meant Thursday and Friday evenings and most of Saturday were spent cooking casseroles, desserts, birthday cake, a roast leg of lamb and vegetables. We also tidied up a bit. We even put the Christmas tree away. Yes that's right, the Christmas tree. Only six months late. (It was suggested that we leave it up to celebrate "mid-winter Christmas" which is quite popular in these parts, however the birthday boy wanted it put away). We don't use the large front room all that much and I am a champion procrastinator. In fact last year I got as far as putting away the decorations, but the tree itself stayed up all year, which is something of a record.

We used to have a real tree which of course did get disposed of after a couple of weeks, but these days we have a synthetic one. There's only one thing more forlorn than a Christmas tree past it's best and that's a used birthday candle. The tree at least went off with our green waste to be mulched and made into fertiliser for people's gardens. (Very good of the City Council to charge us for green waste so they can mulch it and sell it back to us).

But what do you do with a used birthday candle? Sometimes we re-use them, but you can't really get away with that more than once, it would just look cheap to put a stub of a candle on the cake. Someone should start a business collecting up and recycling used birthday candles - you could melt them down and make new candles from them, or turn them into biofuel, or use the wax for batik, or melt them into weird statues, or something. Maybe I could melt them down and make little floating tea-lights.

I was one of those conventional old-fashioned mothers who stayed at home until the children were all at school, then found the work world didn't really want me any more. It took a while, but I think I've managed to re-invent myself and find a place in the world. I think the Christmas trees and birthday candles deserve that too.

We managed to spin out the celebrations and have a family dinner as well on the actual date which was Friday. Tomorrow he's off to Paris for a week and a half. It's too late at night for me to bother to link to the previous post, which had the link to the news article which explains why he's off to Paris. In fact I think it is high time I got to bed.
Posted by Catherine at 11:22 pm 1 comments

I'm not sure if this can be heard outside Christchurch, but I will be on local access radio this Saturday morning.
The link is to the current program, but after this week I guess it won't be mentioning me any more, so be in quick:
Women on Air
Posted by Catherine at 11:28 pm 3 comments

I bought a number of poetry books last year, because several of my favourite New Zealand poets brought out new collections. I thought it was a great year for New Zealand poetry, and that I was fairly familiar with all the new offerings.

I was surprised, then, when the shortlist was announced for the Montana New Zealand book awards. Of the three poetry finalists, I had read one but don't own it. (I borrowed it from the library). The other two weren't known to me at all. I guess I will have to get reading.

The judges commented that it was an especially fine year for poetry, and they could easily have chosen five. It set me wondering what the criteria are. There is a separate award for the best first book (although there is no shortlist this year, unlike in previous years, so I'm not sure how it will be chosen). So, do the judges favour mid-career poets? The two I own which I thought would make the shortlist for sure are both by very experienced poets who have won before - Bernadette Hall's "The Ponies" and Vincent O'Sullivan's "Blame Vermeer". Do the judges decide that it is time someone else had a chance? Or are the finalists chosen entirely on merit - did they feel that these two weren't up to the writers' previous standard? I can't see it myself, though as I haven't read the ones that were chosen, I can't really compare yet.

One of the three finalists, Johanna Aitchison's "A Long Girl Ago" , is a debut collection. Will the "best first book" be chosen from the main category finalists? If so, she would seem to be a shoo-in.

According to a book shop newsletter I received today, "the judging panel takes into account enduring literary merit and
overall authorship; quality of illustration and graphic presentation; production values; general design; the standard of editing and the impact of the book on the community.

I'll be very interested to find out the winners in July
Posted by Catherine at 11:15 pm 0 comments

Here is One I Prepared Earlier...

Since I spent the weekend alternately coughing and sniffling, and sometimes both at once, the idea of heading for a bit of land sticking out into the Pacific Ocean, coated with a layer of snow dumped by winds straight from the Antarctic, wasn't very appealing. Not even to run around looking for orange and white flags (also known as "orienteering").

So I stayed home wrapped in snuggly quilts and watched TV.

Instead I thought I'd post these photos I took on a walk the previous Saturday, before the cold bug hit. This small enclosure has been decorated with prayer flags for quite some time. I'm not sure if the fence was put there just for the prayer flags, or if it serves some other purpose - maybe sheltering some rare native plant? Nothing inside the fence looks particularly unusual though, apart from the flags.

I'm trying to prove to myself that with a bit of imagination, I can visit any country I want without leaving home. So - do these look like Tibet? (If you have been there, don't disillusion me too much!) 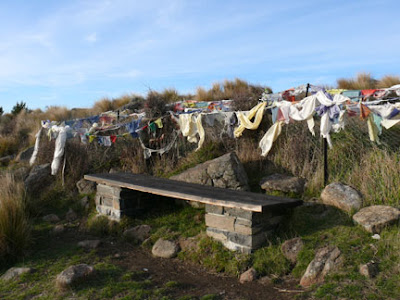 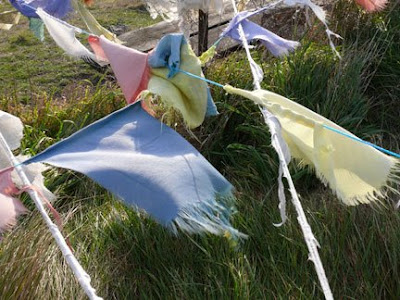 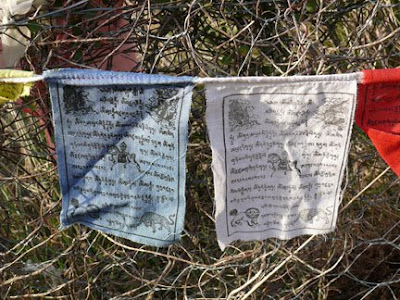 A few weeks ago we had an early snowfall which hit our tomato plant. Up till then it had been rather prolific, but the tomatoes started falling off, so we gathered them up and set them on the kitchen windowsill to finish ripening.

The tomatoes looked fine. But they didn't ripen. Instead they started to ooze puddles of brownish liquid.

For the last week I've been feeling very much like one of those tomatoes. But, I haven't entirely finished a box of tissues yet, so I guess that's OK. I took the whole week off work, one day at a time. And I'm trying to convince myself that I'm fit to head back tomorrow, because sitting at home coughing is getting boring.

We had snow again last night. The hills looked very pretty this morning, but the air didn't feel so pretty. I'm contemplating the depressing warnings that if we don't cut peak time power use, power cuts are likely in about four weeks time.

Don't they know that most of us don't actually get up in the morning thinking "Wouldn't it be fun to waste some electricity today?" Because really, we have better things to do with our money than waste it. (Like buying poetry books. Or food.)

Every year, the power companies give us clever ideas to save power. And I roll my eyes and think "Don't they realise we've been doing that for twenty years or so already?"

Sigh. Thank goodness for our open wood fire, which we are not supposed to use because of air pollution, and our new gas cooktop.
Posted by Catherine at 5:31 pm 0 comments