Even before the leaves suddenly started changing colour this week, there were signs of autumn. For instance:

- crocuses in my garden
- chestnuts to pick up, roll around in my palms, and put in my pocket to feel their satiny smoothness at odd moments
cool nights
- mornings that are still dark when I have to get up for work (that will change when daylight savings ends in a week or so, but not for long)
- and of course the Canterbury Poets' Collective's autumn series of poetry readings.

There have been two so far. At the first I had the pleasure of arriving early to have a coffee and a bit to eat with Kay McKenzie Cooke, and to catch up on her news. Kay was one of the three featured readers, and I enjoyed her reading very much. She read from both her first two books (I have the second, but not the first) and also for her next collection which she is still working on - it promises to be another good one. The other two guest poets were local poet David Gregory and a visiting American, Mary Jane Grandinetti. David was rather too modest and only read a few poems. I would have liked to hear more of his tricksy word play. Mary Jane introduced us to short forms, in particular the fib. She edits two online journals for short poetry forms, the Fib Review and the Shot Glass Journal.

The second line-up of three guest poets included two local poets and one from Nelson. Robert Lumsden from, I gather, Singapore, was unable to make it so Sean Joyce substituted for him at the last minute. Sean has the wit and fluency of the Irish - his "Irish pantoum" was a great hit. Tom Weston was the other Christchurch poet, and again I enjoyed his intelligent and thoughtful poems. But Jessica le Bas from Nelson was for me the most memorable. Jessica read two poems from her first collection, but focussed mostly on her second book Walking to Africa. The poems in this book form a connected narrative about her experience of the mental illness of a daughter who became unwell at the age of fourteen. It is a powerful, moving and brave collection. I have to admit, after borrowing the book from the library, I didn't buy it. I thought that it might be one I couldn't face dipping into over and over as I do with most of my poetry books. I hope though, that it finds a wider audience than the usual poetry buying public. Jessica is an excellent reader although she commented that there are poems in the collection that are too difficult for her to read now.

Both evenings had the usual line up of open mic readers in the first half. There is an audience vote for the best, and since this is the twentieth year of readings, the best open mic readers will be the guest poets for the final evening in the series. It looks like being an excellent night.

And, also on the poetry front, I've pretty much decided to sign up for NaPoWriMo at Readwritepoem. I think it's time to remind myself that I can actually manage a poem a day, if I use my two fifteen minute coffee breaks. (Bad poems probably, but still poems, with potential for revision).
Posted by Catherine at 9:34 pm 4 comments 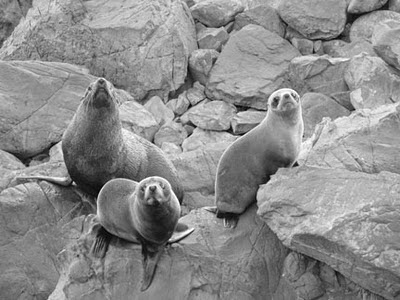 Here's another photo for Carmi's monochromatic week at Thematic Photographic. This one's not from our recent road trip, but from last September. It was taken just north of Kaikoura (a popular destination for whale-watching, etc) when we were returning from a holiday in the North Island. There wasn't a lot more colour than this in the original photo - just variations on grey - blue greys, beige greys etc.

When I was pulling this one out of the files I remembered a letter to the editor of our newspaper a week or so ago. A Brazilian tourist was saying that he had a wonderful time in New Zealand, but...

He went on to complain that our roads were single carriage way, even near the big cities. He seemed to think we should upgrade them all. Well - except for Auckland, where there are real traffic problems - we seem to get around OK. Even if we sometimes have to wait patiently to pass a slow campervan or truck. We only have four million people, the traffic problems are not huge. And I think most New Zealanders would think that if we have spare money, it should be spent on health and education rather than a lot of unnecessary multi-lane highways (except in Auckland, where, as I said, there are real traffic problems. Although not as bad as London).

The point of all this? Well, when I took this photo I was standing on State Highway 1. The equivalent of the M1 in Britain. Except that the M1 is a multi-lane highway where the view is of nothing but other cars whizzing past at high speed. If you can see the countryside at all, it is mostly embankments or hedges blocking any wider view.

I have a huge file of seal photos, those pups are just so cute. (New Zealand fur seal, the Maori name is kekeno)
Posted by Catherine at 10:48 pm 1 comments

Looking over my travel photos, I find that those taken in low light - mostly in the evening - seem to call the most to be rendered in black and white. Earlier in the day, strong colour calls to me. In the evening, it's the moods, the shapes, the contrast of tones that ask to be photographed. Here are a couple that didn't have much colour to begin with - and what they had, I have removed in Photoshop. The first, I showed in colour a few posts ago. The second, a shot of Lake Wanaka in the evening (while we waited for our Indian takeaways to be ready), I haven't shown before. 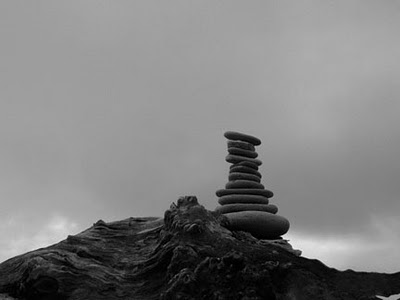 More monochromatic photos this week at Carmi's Thematic Photographic here.
Posted by Catherine at 8:59 am 5 comments

Perhaps it's just a coincidence, but both times that I've agreed to participate in Readwritepoem's Virtual Book Tour, the book for the month has been a chapbook that is essentially one long poem. Is the longer poem becoming more popular?

This month it is Molly Gaudry's Anatomy for the Artist, which you can read free online at Blossombones. Each small section/stanza begins with the phrase "we take me apart", and the poem tours the body discussing all the ways in which it is taken apart:

We take me apart--

by form and function of muscles

There is a narrative hidden in the work, although it doesn't appear immediately - but the tension builds, and by the end the narrative has become clearer, with the narrator taken apart both anatomically and emotionally.

It's writing that takes me out of my comfort zone, and I didn't think I would like it at first, but it certainly grew on me by the end and I felt the force of the underlying story. And I am a sucker for scientific vocabulary - there was plenty to satisfy me there, such as cruciate ligament of knee and many others.

A few niggles, though. In particular, there are one or two places where the anatomical terms seem wrongly placed. Going back to find them, there are not many. But they certainly stuck out on first reading, making me ask "what's that doing there?" eg the symphysis pubis appears in a section beginning "we take me apart by muscles of the upper limb".

The second point is not so much a niggle as a curiosity to hear how one would read the work out loud. It makes heavy use of italics, and I always wonder how one would read a work like this and have it retain its sense. I wonder if two voices would work? There are sections that I read over about three times - once straight though, once reading the italicised bits only, and once reading the unitalicised portions only, and I felt that deepened the reading considerably.

I'm not much of a fan of reading online. I'm happy to read short poems on the screen. For something this length, I prefer to print it out so I can read it in comfort in a squishy armchair. The reader on the website did allow me to print it, but not very easily. I had to click through page by page, but couldn't jump pages and it would be the same for reading - if you get to page ten and want to check back to page 1, you can't just select page 1 but have to go back one page at a time, or use your browser history to jump back. Jumping forward would be even harder. And you can't just print the whole poem at one click - you have to print separately each time you turn to a new page.

That annoyance over, I enjoyed reading my printed out version - and the anatomical drawings on the cover and on the footer of each page are a delight.
Posted by Catherine at 6:50 pm 2 comments