Five o'clock. The bright interiors
of freight forwarders' warehouses
framed in the dusk like a Rembrandt nativity
on an old postage stamp. No camels.
No baby. Planes overhead. Men with forklifts,
ordinarily wise, load cargoes
for distant lands. A single soft flake
lands on my windscreen.
The evening's first star
grows brighter in the sky.

Just after winter solstice seems an appropriate time to post this poem, which is a winter poem, and could also be a Christmas poem, except of course that here in the southern hemisphere Christmas comes in mid-summer.

I used to work near the airport, and in winter it was getting dark when I left the office. A sudden glimpse of a lit warehouse, which somehow reminded me of the painting on the postage stamp shown above, inspired this poem.

It was first published in the Christchurch Press daily newspaper, and later appeared in Flap: the Chookbook 2.

For more Tuesday Poems, visit the main hub site for links to all the participants.

Posted by Catherine at 8:03 pm 2 comments

A Trip to the Library

The temporary Christchurch central library is situated just north of the cordoned red zone, where a lot of demolition work is going on. So - I never know what things will look like when I go to change my library books. 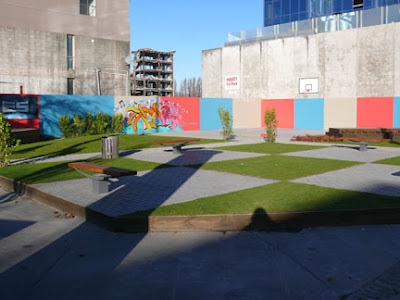 and here it is when I went yesterday 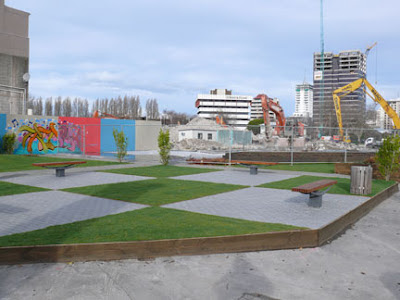 I felt incredibly sad to see just how many buildings are disappearing, and there are more to come. 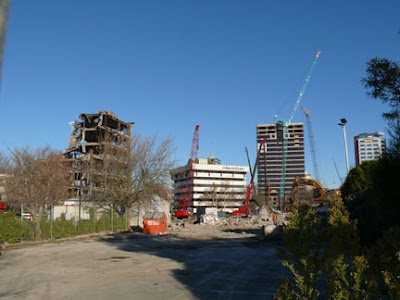 Another from three weeks ago - the tall building behind the crane is the Price Waterhouse tower - soon to be completely gone. 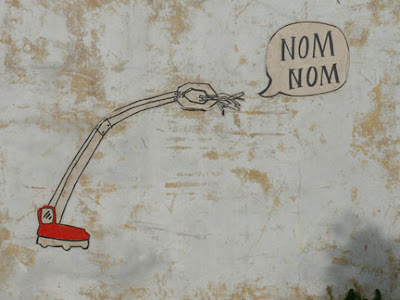 A bit of Christchurch graffiti humour.

There is a new temporary central library opening tomorrow, further south - I may try that one next time, both to see if they have more books (there are still a lot unable to be retrieved from the damaged main library), and to see if the surrounding streetscape is a little less depressing.

I have been nursing a cold - sleeping in, then huddled under a pile of quilts working my way through Wolf Hall, which is a very fat book. In the meantime,for your reading pleasure, many of the Tuesday Poets are celebrating flash fiction this week.

And over at Helen Lowe's blog, she has chosen Learning Italian, one of my poems, for the Tuesday Poem this week. Thanks, Helen!
Posted by Catherine at 10:55 pm 0 comments

On beautiful mornings,
flowers fling up their
bright skirts, trees wink
and children run from
their parents' hands to
stand in the crack that
has opened overnight
outside the kitchen.
They jump in.
They jump out.
In and out
as if it were a crocodile.
The earth lies still and
lets them jump
in
and out
of its open mouth.

On beautiful mornings
the front of the bagel shop
falls down flat on the street.
The pub slumps in the gutter.
And the church across the
road lays down its heavy
cross. It spreads itself in
tiny pieces, no bigger than
a man's hand
among the daffodils.

Fiona Farrell's poem "The Beautiful Morning" was published in Catalyst, volume 9 and also in The Broken Book which was last week shortlisted in the general non-fiction category for the New Zealand Book Awards. The Broken Book is the book that Fiona was writing when the 2010 and 2011 earthquakes struck Christchurch. Originally a book about walking, it has lovely passages which ramble in the way one might do when taking a leisurely walk about the countryside. However the earthquakes changed the nature of the book, and interspersed with the prose are a dozen or so poems which interrupt the text in the same way that the earthquakes have disrupted all our lives.

I loved the way that The Beautiful Morning set beauty alongside destruction in such a matter of fact way. And I found the whole book really absorbing to read, a worthy contender for the book awards. (With the poetry shortlist being restricted to three books, it is nice to see a little extra poetry sneaking in to another category).

It was a good week for Fiona last week - as well as her book being shortlisted, she was made an Officer of the New Zealand Order of Merit on the Queens Birthday honours list for her services to writing. 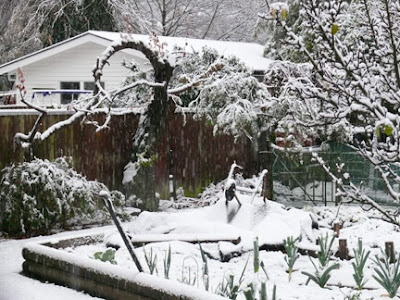 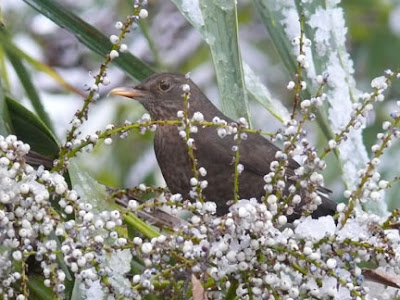 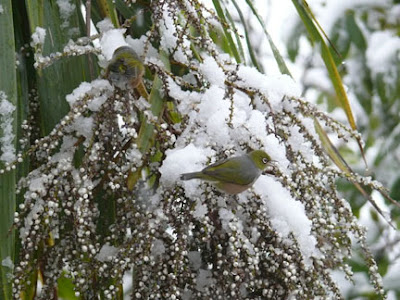 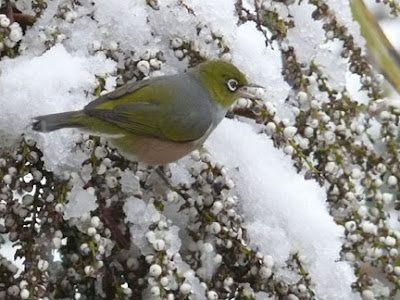 We don't usually get snow this early in winter but it fell heavily all day today. Unlike many people I did manage to get to work as it is not too far from my home. All the buses stopped at 11 a.m. Most schools and many businesses were closed. The garden in the photo is next door to the place where I work, and I took the bird photographs through the window at lunchtime. The large flower panicles belong to a cabbage palm (ti kouka in Maori) and the little waxeyes were all over them. I'm guessing that they need to eat a lot on cold days to keep up their body heat.

I did get to come home a little early so as not to be on the icy roads when it was getting dark. And our usual Wednesday bridge night was cancelled so I have tackled some long overdue housework - nothing like being active for keeping warm. Back to work in the morning, if the snow stops overnight as forecast.

Posted by Catherine at 9:30 pm 4 comments