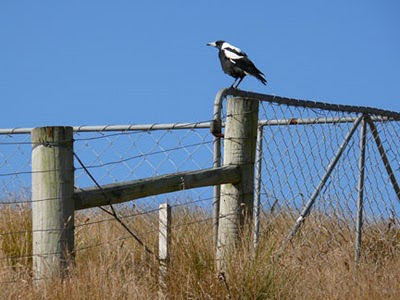 There can't be many New Zealanders who haven't come across Denis Glover's poem "The Magpies" - very likely in primary school. That may be a pity, because it is liable to be dismissed later on as rather simple and childish, with it's repeated chorus

The more adult point of the ending to the story will probably be a little lost on most children with it's story of rural hardship and land lost to "mortgage corporations".

(That's a magpie in the photograph above, the same as the Australian bird of the same name, but different from the English one - larger and more agressive).

And there are other Glover poems which I enjoyed in my younger years, which also seem quite simple -
Drift, drift upon the beach
Dead man's bay and dead man's reach

But ends in rather more barbed fashion

And wistfully the children sit
While Army trombones teach
That only Christ, not Cortes,
Can land upon the beach
At Sumner when the seas roll in.
At Sumner on a Sunday.

(The Army in question, of course, being the Salvation Army - whose bands rarely at the beach these days).

Both "For a Child" and "Drift" appear in Glover's collection "Sings Harry" published in 1951. But it was the title sequence which particularly interested me. I'd never looked really closely at the "Sings Harry" poems before. Again, they are apparently simple poems. On the evidence of the text, Harry is a rural character, probably unmarried, now elderly and living a simple life:

Once I followed horses
And once followed whores,
And marched once with a banner
For some great cause,
sings Harry.
But that was thistledown planted on the wind.

The device of the irregularly repeated refrain sings Harry in these verses is interesting. The poems read perfectly well without it, many then becoming sequences of regular four line stanzas. But the phrase "sings Harry" distances the poet from the poems a little. Without it, they might be taken as autobiographical. Clearly they are not. Glover was born in 1912, whereas Harry remembers Uncle JIm going off to the wars and being killed in the Transvaal -presumably around 1904. He is an older man than Glover. Still, I can't help wondering how much of his own feelings and attitudes Glover puts into the character.

Harry is a mountain man, but in other poems in the collection, and even in the "Sings Harry" poems, Glover's love of the sea shows through

From the cliff-top a boy
Felt that great motion,
And pupil to the horizon's eye
Grew wide with vision

I enjoyed this collection. Perhaps Glover was half-referring to himself when he wrote the first in the book:

These songs will not stand-
The wind and the sand will smother.

Not I but another
Will make songs worth the bother:

The rimu* or kauri* he
I'm but the cabbage tree*.

Sings Harry to an old guitar

The Sings Harry songs have been set to music, and I believe they will last longer than the author might have expected.

*The Maori have a saying when someone of stature dies: A mighty totara has fallen. Like the totara, rimu and kauri are majestic giants of the forest, particularly the kauri. The cabbage tree is a palm tree native to New Zealand, quick growing and common (we have one in our garden).
Posted by Catherine at 10:15 pm 3 comments 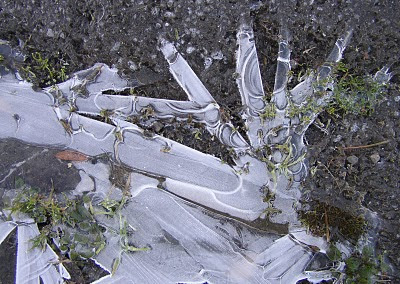 Something cool for a hot summer day.

For more water in all its forms visit Carmi here
Posted by Catherine at 10:28 pm 4 comments

The challenge that Dana set over at My Gorgeous Somewhere was to read a poetry book for each month of 2010. January's was to be a book published in the year that we were born.

Of the responses I have seen to this prompt so far, everyone is younger than me. Some of them are younger than most of my children. So it's not surprising that the poetry I have been reading, published in (I admit it!) 1951, seems less modern than that most of the other participants are reading. Actually, I was surprised at how un-modern it feels. After all, in high school we read T S Eliot (I was a big fan), and most of that was a good deal older - for instance, The Love Song of J Alfred Prufrock was published in 1915. It seems then, that the traditionalists hung on quite a bit longer.

I read a New Zealand classic, Denis Glover's Sings Harry, followed by Adrienne Rich's first book A Change of World (not in our local library, but included in her Collected Early Poems which is. Then for good measure, I started delving into another little-known New Zealand poet, Mary Stanley, whose book The Starveling Year was not published until 1953 - however as some of the poems in it were written in 1951, I thought it was close enough.

If I get round to it, I will comment on these in more detail in the next few days. All of these poets in 1951 were writing in fairly conventional forms - generally rhymed, and if not, at least in fairly equal line lengths with traditional metre. And I began to think that rhyming poetry had at that time pretty much come to the end of the line.

These days, I love to find a well-crafted modern rhymed poem. I see no reason to think that rhymed poetry is dead. But my overwhelming sense from reading rhymed poetry 1951 style is that freer verse forms didn't come a moment too soon. I think that the more conversational forms of free verse have actually revitalised rhyming poetry. The rhymed poems that I love now sound quite different to these mid-century versions - much less stiff and formal. There are poets now who seem to combine the best of both worlds - the heightened sense of structure and rhythm that well-placed rhyme gives, and the sense of flow that arises from the less strait-jacketed free verse forms. Or - since I've hardly made an exhaustive study - maybe I'm just talking through my hat.
Posted by Catherine at 10:08 pm 1 comments

This magnificent crop of mushrooms has been growing in our backyard most of the summer. It must be something to do with all the damp grey weather we have been having. 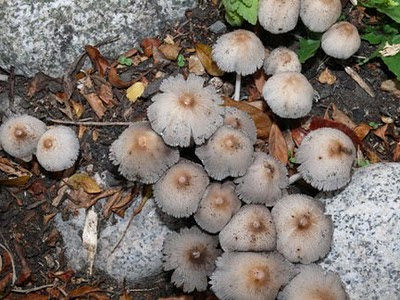 Yesterday after a night of heavy rain, things cleared for a while, so I headed into the hills, starting in the dry valley then up into the wind and mist. Returned wind-tossed but well-stretched.

I've been doing quite well with my "sort of goal" (no New Year's resolutions around here) to get more exercise. Other projects such as family history and poetry have been languishing. Fortuitously, I received Jennifer Louden's newsletter this week in which she talks about how lesiure time pursuits. She says (referring to Winifred Gallagher's book Rapt) that Sunday noon is the unhappiest hour in America. There are useful tips on creating the conditions needed to achieve flow in leisure time activities.

I'd like to link to the article but it's not on line. If anyone is interested, I can forward the e-mail to you.

A couple of quotes:

You have to resist the seductive pull of shadow comforts and time monsters (the things you do that don't really nurture or engage you) to get into flow.

..You can lose yourself to shadow comforts and time monsters in the gaps between planned activities.

(That would be computer games, then?)

I've been pondering the idea that since I work - using my brain in a fairly concentrated way - for thirtyeight hours a week, and have other responsibilities as well, I shouldn't create extra obligations for myself by feeling I must write poetry, record the family history and so on. This newsletter helps me to look at those "extras" in a different way and brings me back to the idea that it is more relaxing and renewing to take time for writing than not.
Posted by Catherine at 9:35 pm 2 comments

I once wrote in a poem "After Christmas, all the days fall off the calendar". It's been pretty much like that around here. I've been on holiday from one job, the other is only a day or two a week, and I've had plenty of time to blog or do just about anything else, but no real sense of urgency about it. Back to work full time next Wednesday, and it feels like time to get back into some sort of routine.

One of my Christmas presents was an annual pass for the Christchurch tram and gondola. These two businesses make their money by charging high prices to tourists, but for locals the annual pass is an amazingly cheap deal. I asked for one because I fugured that if I use the gondola, I can walk in the hills without having to walk up the hill - and I can easily access a greater variety of tracks than the ones I usually walk in. (I could drive around the Summit Road, too, but that's a bit circuitous - the gondola is more direct).

I'd been waiting for a day that was not too hot, and not too windy (the gondola sometimes closes down if the wind is too strong). Finally I went up on a still but overcast day which seemed just right. I was expecting terrain like this: 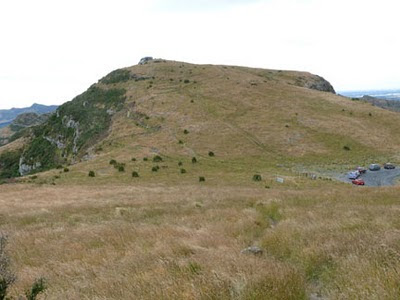 (That't the gondola terminal perched on top of the hill).

In fact much of the route in the direction I went was more like this: 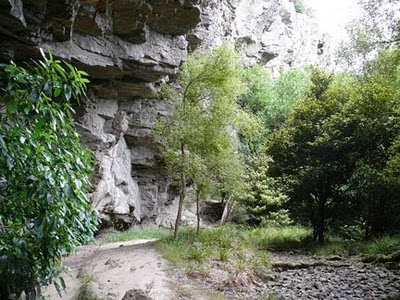 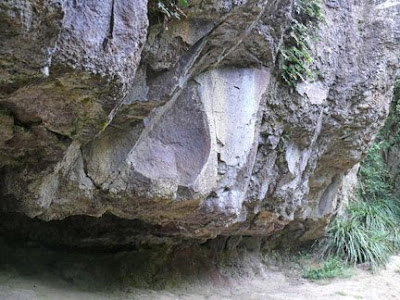 - a path under the steep bluffs, with plenty of shade from the native bush. This is not quite typical, because it's wide and level here. Much of the path tracked up and down the steep hillside, so it was a bit tougher than my usual walking track.

View of Lyttelton - the harbour on the opposite side of the hill from where I live - from the track: 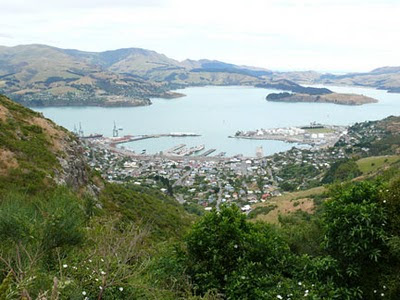 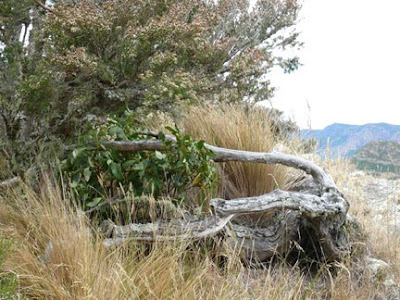 And because Carmi's theme for Thematic Photographic this week is What I Did on Vacation, this re-entry into the blogosphere will also serve as my contribution for this week.
Posted by Catherine at 2:32 pm 2 comments