And Now for Something More Festive..

I have been crazy busy, but I thought it was time to post something a little more festive than my previous whine about inconsiderate real estate agents.

These are photos I took at one of the conservatories in the Christchurch Botanic Gardens yesterday. The staff have gone to quite an effort to make these displays. Poinsettias are out of season here, so trickery is involved in getting them to bloom so richly. 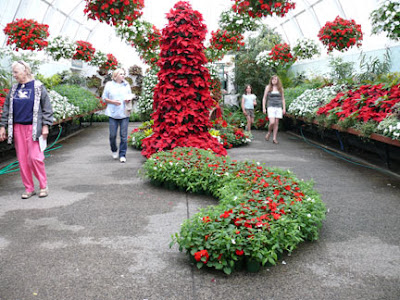 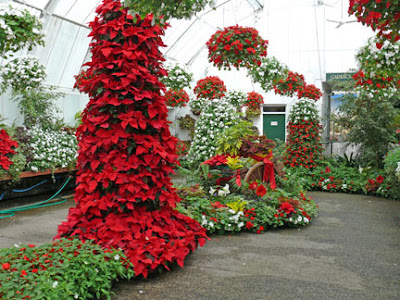 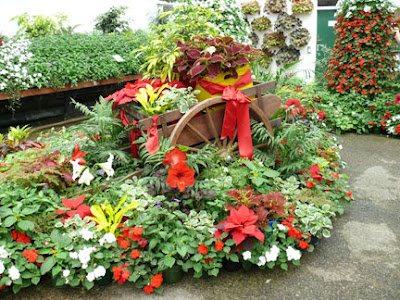 I arrived home from work and Christmas shopping this evening to find a real estate agent's sign nailed to the corner of our fence. No, my husband hadn't put the house on the market in my absence. I had a fair idea of what was going on, but I had to inspect the sign more closely to check it out. It was, in fact, advertising a house for sale just up a private right of way which runs from the end of the cul de sac by our house.

It happened once before. We rang the estate agent to complain, obtained an apology for putting it there without our permission, but let it stay. After all, our beef was with the agent, not with the neighbours who were selling their house.

This time, I rang the day time phone number rather than the agent's cell phone. It costs money to ring a cell phone, whereas local calls to a landline are free. I got the answering service who had the agent call us back. My husband took the call.

Her explanation? Well, she was going to put the sign on the other side of the alley, and she was going to ask permission, but the neighbours said "the sign was there" (ie on our fence) "when we bought the place". "Yes" P said "and we complained then too, and were promised it wouldn't happen again". (Different agent, of course).

What is more, she gave some excuse about how the fence was along common property, ie the access lane. She seemed to think that this made the fence somewhat common property as well. That would be very nice. Maybe the neighbours would contribute funds to help us repair it, which it will be needing very soon. No? I didn't think so.

So, the sign is coming down. All she needed to do was ask nicely in the first place, maybe with a box of chocolates or packet of Christmas mince pies as a "thank you", and she would have no doubt been given permission. An arrow pointing up the lane to make it clear that it wasn't our house on the market would have helped, too. (The sign displayed the house number involved, but it wasn't all that obvious).

Our neighbours on the other side had their house on the market and it sold in a week. The house market is crazy around here, the estate agents are doing very nicely for not much work. Five minutes and a few dollars is surely not too much to ask?
Posted by Catherine at 10:09 pm 4 comments

I didn't really intend to take such a long blogger break in December, but one thing and another intervened. Once I stop posting regularly, it seems harder to get started again. with daily posts, I post the daily trivia, but none of that seems quite important enough for a weekly or less frequent post. Nothing for it but to jump in where I am.

A month ago our grapevine had large areas of curled up dead leaves where it had been caught by a late heavy frost in October. Now, I walk across the lawn and the brown grass crunches beneath my feet and blades snap off. The grape vine is covered in long curling tendrils coming across the yard to greet me.

Seen from my car - a blackbird swinging on a chain link fence, its long tail pivoting up and down for balance.

****
I went to check our electricity meter, having received an estimated bill (it saves on labour costs if they only read the meter once every two months). Inside the meter box were three small foil-wrapped Easter eggs. Where did those come from? I'd swear they weren't there the last time I looked a couple of months ago, so they strays missed in our Easter egg hunt. A mystery. What a shame they didn't seem quite edible any more.
Posted by Catherine at 8:26 pm 5 comments

The prompt over at read.write.poem this week was to "play with your parts". That is, to take three different parts of our lives - three towns, or three hobbies, or three jobs, or three people, and mix them up in one poem.

I have had some ideas but none of them have made them to a finished poem yet (or even a first draft). However, I realised that this poem which I wrote recently does mix up a number of different periods in history, so I thought it was at least partly relevant to the prompt to share it here.

And yes, it is a first draft, so suggestions will be considered.

The Crows at Stirling Castle

All afternoon the crows have been casting themselves
off the castle walls into the air. The tourists below
group in small knots around tartaned guides,
look down the steep cliffs but not up
to where the crows hover in dynamic stillness.
They are surfing the wind.

They hover above royal baptisms
and coronations, they scatter only briefly
when cannons hammer the castle walls.
A white feathered figure leaps to join them,
and plummets in a scatter of feathers
They disperse and regroup.

It is not “murder, murder” that they cry
as dark cloaked figures conspire in corners.
The crows have their own business to attend to,
hanging motionless in the updrafts
above the cliffs.
Posted by Catherine at 8:07 pm 15 comments