It starts with the ocean in the sky, that sea
in outer space, dense shoals of debris

is finned flesh: silver scales, a gaping mouth,
a luminous flash. And we are the night anglers

who would hook each blazing fish. All our lives
we’ve known how to wish.

It has been a privilege over the past year to take part in a small poetry workshop group in which Greg O'Connell is one of the members. Greg has a background of writing children's poetry. From there he has expanded into writing poetry for adults also. His sense of word play and musicality extends into his adult poems, making them a joy to listen to. He is also a supportive and perceptive commenter on other people's poems, and his suggestions are always pertinent.

I am grateful to Greg for permission to republish this poem, which originally appeared in the Christchurch Press, as my Tuesday Poem this week.

Greg was born in Oamaru and has lived in Christchurch and the West Coast. A number of his poems have been published in the School Journal, and also in A Treasury of New Zealand Poems for Children, edited by Paula Green. He also travels to schools to present interactive performance poetry shows and workshops. There is a very full and interesting biography on Greg's website. 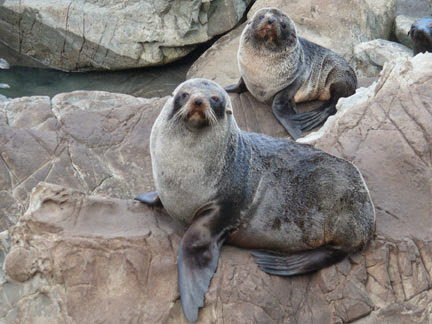 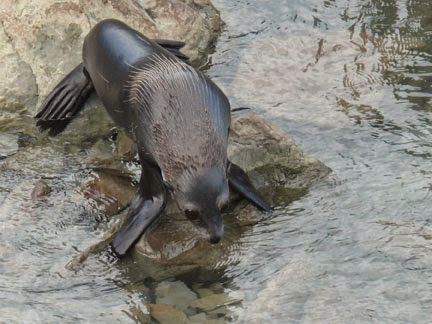 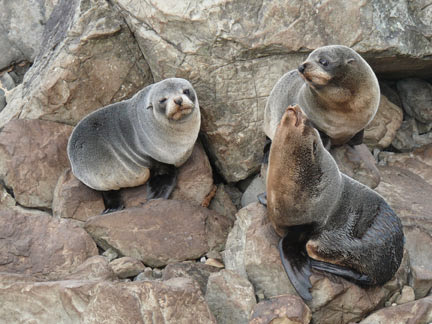 My favourite road trip stop is just north of Kaikoura, where you can stand on the road verge - State Highway 1, the main route from the bottom of the South Island to the top of the North Island - and look down on the beach just a few feet below, at the seal colony where these cute pups were lounging. It is the most accessible mainland seal colony in New Zealand, and perhaps in the world. You can also walk up a short track on the other side of the road to a waterfall, where the pups play while their mums are at sea. They swim up the creek to the pool below the waterfall.

Unfortunately for the seals, some people will try and spoil things. We observed one foolhardy pair walking between the seals and the water, flapping their arms and rushing them in an attempt to get a more lively looking photo. It's a pity they didn't get more than they bargained for. These are wild animals after all, and can definitely injure if they decide to attack. Looking down from the top of the low cliff is plenty close enough for good photos.

Thematic Photographic this week is celebrating animal planet. For more creatures, head over here.
Posted by Catherine at 5:55 pm 4 comments