As it was our last day in Singapore, we packed up our luggage and left it at the front desk of the hotel before setting out for a last look at the city. We still had a number of vouchers for free entry to various attractions. One of these was a half-hour river cruise. That's where we were headed first.

Singapore Airlines operates a hop-on hop-off bus around the city, which is only $3 for the day on presentation of a boarding pass, or free with the particular package deal we had booked. So it was time to figure out the timetable and route. We found a stop a couple of blocks from our hotel and waited for the bus which took us to within a couple of blocks of the departure point for the river cruise.

On the way along the waterfront from the bus stop we admired the colourful lanterns: 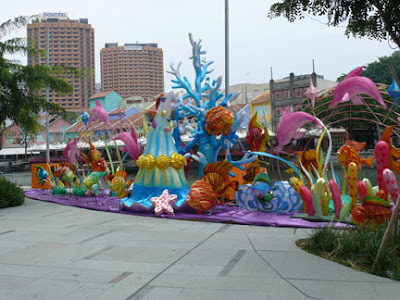 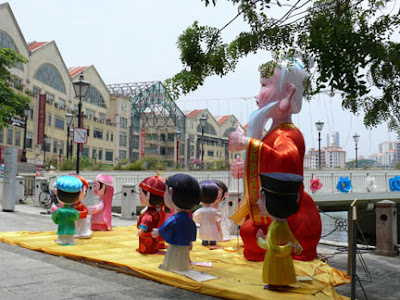 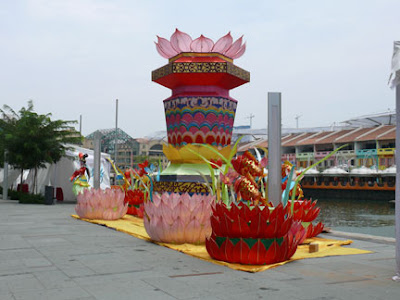 Apparently it was the time of the autumn festival - although since Singapore is almost on the Equator, I'm not sure how they figure out when autumn is. Perhaps the festivals are celebrated at the same time of year as in China. It was a pity we couldn't come back and see these at night. Maybe if we had known they were there on the first night - but the free bus only operates to 7 p.m, so we would have had to find some other means of transport.

The river cruises are conducted in these traditional river boats: 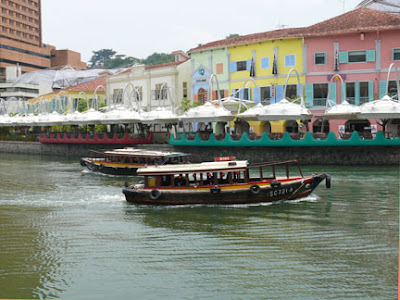 though if you look closely you will see the modern air conditioner (and the boats are operated by modern motors). 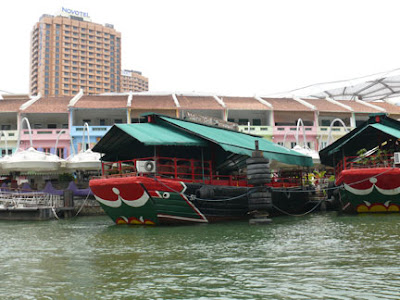 The river boat operator is an elderly Chinese man but he just drives the boat. The commentary issues from the loudspeakers which you can see in front of him, and it is recorded in an American voice, quite a young-sounding one.

After the river cruise, we walked along further to the next bus stop, and got on the bus again to go up to Orchard Road. 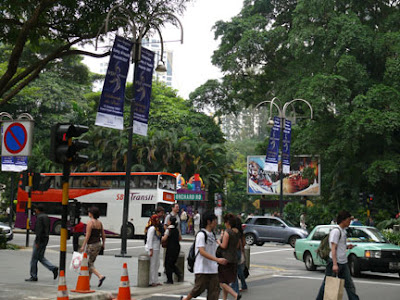 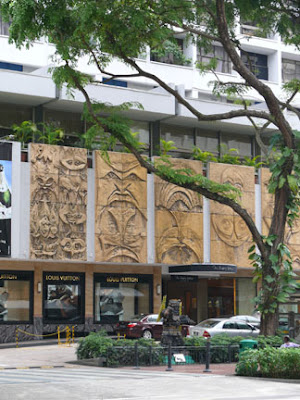 This is traditionally "the" area for shopping in Singapore. Actually, I felt that it wasn't quite up there with the ethnic areas - Chinatown and Little India - for souvenirs, or some of the big new malls, like Suntec City, for more western goods. The very expensive shops that sell labels like Gucci etc are in Orchard Road, but that was well out of our price range. Other buildings seemed to have quite a few empty shops.

We went to the headquarters of the main Apple retailer, but again P was unsuccesful in finding what he was after. Then we looked around the shops a little, found some lunch, and went to the next bus stop to ride back to our hotel.

We walked a block or two to the hotel, past the Singapore Art Museum: 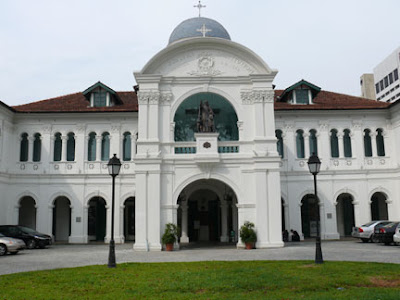 where this installation was out front: 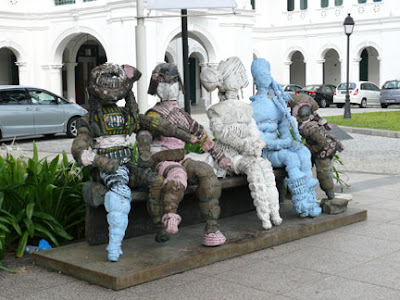 And then it was time to catch the free shuttle from the hotel to the airport, where eventually we boarded our flight back to New Zealand. This was another overnight flight, so it was the next morning - the 2nd October - when we arrived back.

Unfortunately we had stowed our cameras in the overhead locker, and although P had a window seat, there was another passenger on the aisle, so it wasn't very convenient to try and get them when we arrived back over New Zealand. We hadn't anticipated that we would take a different route back. The flight to Singapore crossed Australia diagonally and left the coast around Darwin. The return flight headed almost due south towards Adelaide before heading east to New Zealand. We crossed the South Island and turned northwards to Christchurch. The skies were clear and we had magnificent views of much of the South Island. Without our cameras all we could do was sit back and appreciate them!

And so we arrived back, and there was nothing more to do but loads and loads of laundry, before heading back to work the next day...
Posted by Catherine at 9:39 pm