After our morning tour we had about two and a half hours spare before our late afternoon and evening tour. We had been given a voucher for a "free" lunch (more on that later), along with a list of restaurants where we could use it. The two nearest were both at the Suntec City Shopping Mall, where there was also an Apple Computer store which might stock the doodacky P was after, so that's where we headed.

Just across from our hotel was the Chijmes restaurant complex. 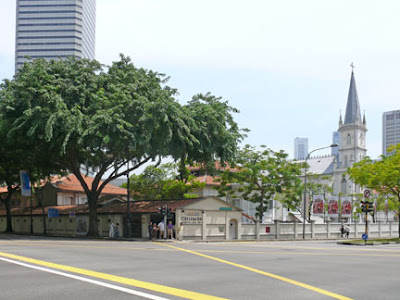 Chijmes stands for "Convent of the Holy Infant Jesus" as the building was originally a convent. This complex is where we had dinner the night before.

A couple of blocks along the street, we passed Raffles Hotel, on the other side from the imposing frontage we had seen on our morning tour. There is a shopping arcade on this side, and we walked along under the verandah to take advantage of the cooling fans, peeked into the courtyard: 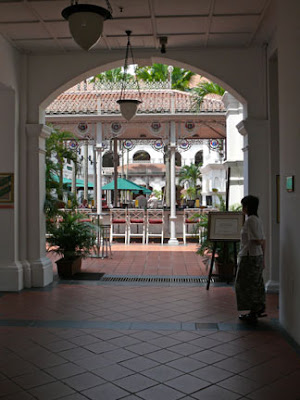 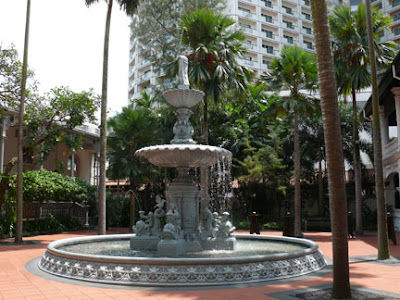 and accidentally walked right through the bar of the hotel. No-one seemed to mind, though we had heard you had to be suitably dressed to enter Raffles (no sandals, etc). In fact a large proportion of the patrons were wearing sandals.

This gentleman was the doorman/porter, I think. 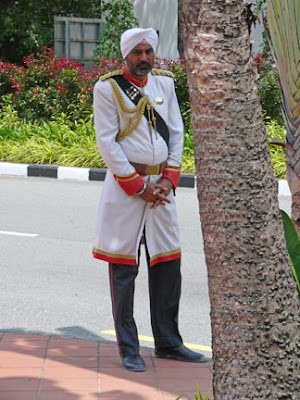 And this is the entrance to Suntec City, a very large shopping mall based on about four towers. 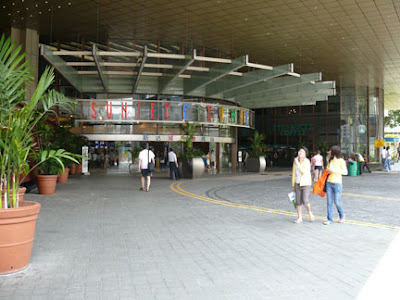 It turned out that our "free" lunch vouchers actually meant that $7 each was deducted from the bill. Given that it was lunch, not dinner, we chose noodle dishes which were just over $7 each, but then we ordered drinks, of course, and when the bill came there were additions for the "complimentary" refreshing towelettes, and for the little dish of crispy bits of something that we were given at the start of the meal, so the bill came to about $15 total, after the vouchers were deducted. Not quite a free lunch.

P didn't find what he was looking for, but was advised to try their main shop near the Orchard Road shopping area. And then it was time to head back to the hotel to meet the afternoon bus.

The bus took us to Mt Faber where there is a cable car station. The cable car goes to Sentosa Island which is a resort island. 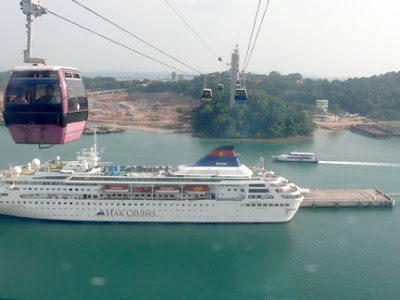 Sentosa has a number of very classy hotels, but also various attractions such as Underwater World, golf courses, a dolphin lagoon etc. We went first to Underwater World, which has an acrylic tunnel with a moving walkway through it - the first in the world, I believe, was in New Zealand at Kelly Tarlton's Underwater World in Auckland, which we went to when it first opened just over twenty years ago. I gather they are now quite common at aquariums (aquaria?) world wide.

It was Sunday afternoon and therefore very crowded with tour groups, and noisy. Chattering ladies in saris, teenage Asian girls posing in cute poses for photos on their friends' cell phones etc. I would have liked to have some quiet reflective time in front of the jellyfish, which were mesmerisingly beautiful: 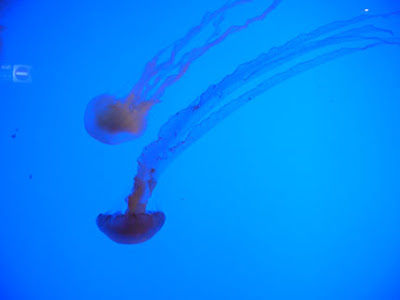 However as usual we had to rush on, and the flashing of cameras detracted from any peaceful atmosphere.

At our next stop we were actually given a little free time. A number of the options involved extra admission fees. Instead we chose just to wander around a little and take in the views: 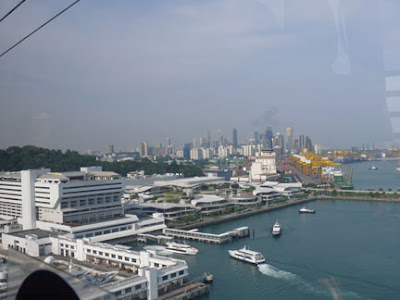 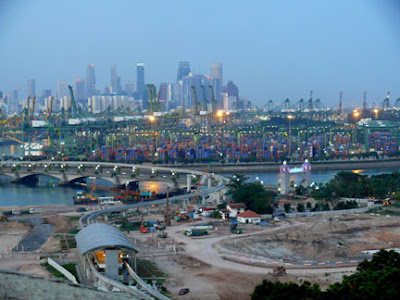 The large bare area in the photo above is a construction site, I gather they are building yet another resort on the island at this point. 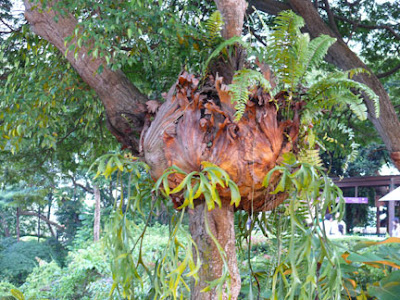 and then we all went to ascend inside the Merlion: 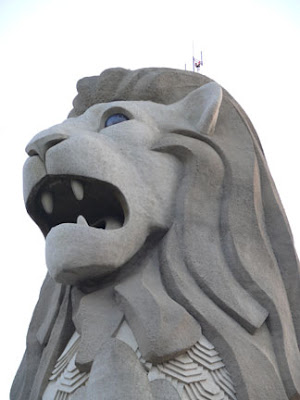 this is a statue of a beast half lion and half mermaid. There is a viewing platform inside the mouth, and another viewing level at eye level (the statue's eyes, not ours). There is also an audiovisual show, and we were given a gold token to put inside a machine, and receive a card which could be exchanged at the gift shop - I still haven't figured out a use for the item we got in exchange!

The last stop on the tour was a sound and light show. 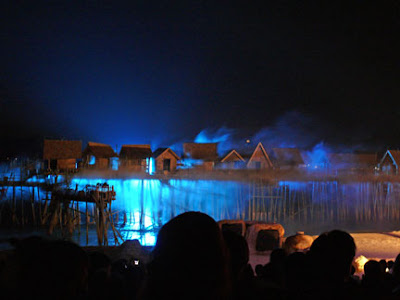 This was presented by a team of youths acting out a story line with the most banal imaginable plot, in very overblown style somewhat in the anime tradition - but the visual effects were quite spectacular. The photo is from the beginning of the show, before the more spectacular moving effects really got going. I didn't take too many photos as I didn't think they would come out, but P managed quite a few on his digital SLR. (A tripod was one of the things I really missed having on the trip. It didn't occur to me till we got back that I could have changed the ISO setting on my camera to take photos in low light).

We then went to the parking area nearby, where we boarded another bus that took us back to our hotel. We were dropped off at a different entrance than usual, and spotted an area where there were many food stalls around a courtyard of open air tables under umbrellas. So we decided to eat there. It was by far the cheapest food we found the whole trip, and obviously aimed at locals as English translation of the menus was minimal. However we found a stall where the meals were priced by the number of selections: eg "1 meat, 2 vegetables" or "2 meat, 2 vegetables", and by pointing - "I'll have that one, and that one" - we were quite adequately fed for under $10 for the two of us - in fact, we paid about the same as we paid for our "free" lunch.
Posted by Catherine at 9:23 pm