I have joined myself up to NaBloPoMo - (inter)National Blog Posting Month - so I have committed myself to posting once a day for the month of November. That will give me the push I need to complete my trip diary, and then I may join in the fun at Ceridwen's read.write.poem group.

Our plan from Inverness was to head south as far as Aberdeen. Scotland on this side has low rolling farm country, giving us a choice of routes. The coastal route is longer and didn't appear to hug the coast very tightly. We decided to take a somewhat zigzag route, heading firstly south across the Monadhliath Mountains, then east along the valley of the River Spey, and then southeast to Aberdeen.

The mountains are not very mountainous. An easy climb took us to the Slochd summit at around 1300 - 1400 feet - just a baby foot hill by New Zealand standards (some of our top orienteering courses climb that much, and the fit young men complete the courses, on foot, in an hour or so). An equally easy descent took us down to the Spey valley.

A "Heather Heritage Centre" was marked on the map so we stopped to have a look. It was essentially a garden and gift shop with attached restaurant. There was some sort of audio visual show on heather, but there was a charge for this, so we gave it a miss. There was an attractive wild garden area with bird and squirrel feeders, and I caught a very brief glimpse of a red squirrel. The red squirrels are the native squirrels of Britain but they have been largely overwhelmed by the introduced American grey squirrels which are larger and more aggressive. 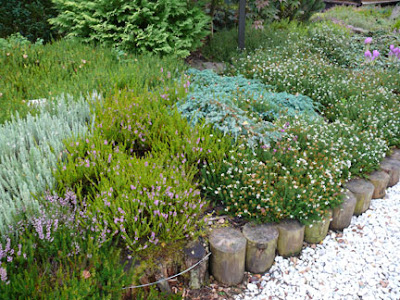 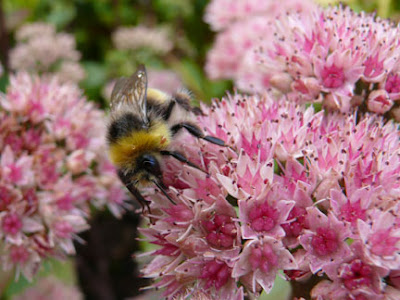 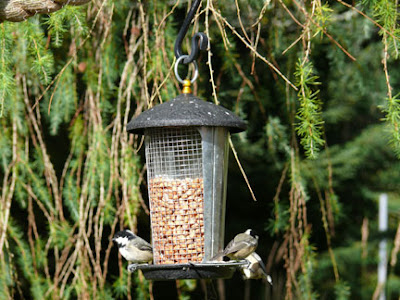 Shortly afterwards we approached the river more closely. The mountains on the other side of the river are the Cairngorms - this area is part of the Cairngorm National Park. 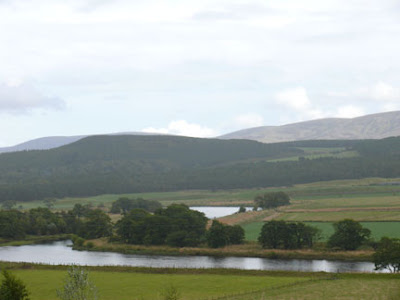 The Spey valley is the site of many whisky distilleries. Specialist tours of Scotland are often promoted - you can do a "castle tour" or a "whisky tour". I can't quite see the attraction of visiting every distillery in the valley - you would have to be a real enthusiast - but the same goes for castles. We thought that since we had visited the smallest distillery, it would be interesting to visit a large one, so we headed to the Glenfiddich distillery which is at Dufftown. (I keep thinking of the Simpsons - "Duff beer for me, Duff beer for you"). We chose Glenfiddich because the guidebook said that it's tour was free - some have a charge attached. 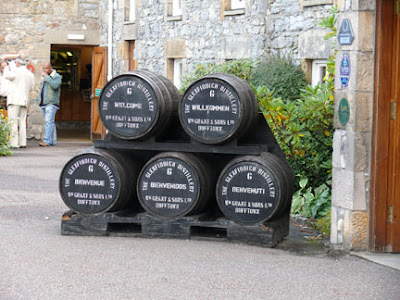 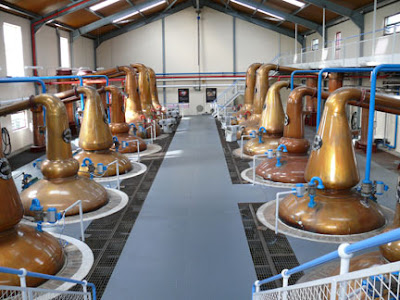 Nearby is Balvenie castle. We stopped long enough to take photos but it was clearly ruined enough to be open to the elements, and it was raining. We seemed to be playing tag with the rain all day, as first we would leave it behind and then it would catch up with us again. 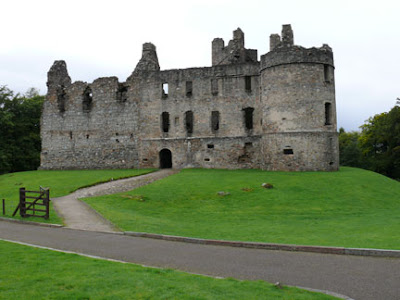 A little off the side road towards Aberdeen was the Archaeolink Prehistory Park - we took a few photos from the carpark. 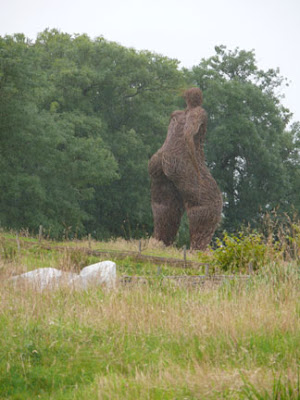 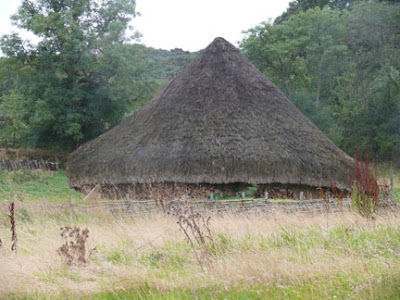 Again, it was raining, and it was getting on in the afternoon, so we didn't go in but continued to Aberdeen.

Aberdeen is a city, and so the main roads in are dual carriageway. This means that they aren't lined with B & Bs as in the smaller towns, and it wasn't immediately obvious where we should look. (It was too late to go to the information centre, being just after five). With the help of the "Rough Guide" and an accommodation brochure, we figured out where to go, and found a street with quite a few of them - all showing "no vacancy" signs until we came to two almost adjacent with vacancies. So I went to check them both out while P waited in the car, the first looked OK but not great, I said I would check with my husband, looked at the other on the way back to the car and found another couple had just arrived and taken the space. And as I headed back to the car, the first landlady came out and said "the room's gone" (presumably to a phone booking). So - we drove along the street until we were out of town, past more "no vacancy" signs. Then turned back into town, and drove around - and around - nothing to be found. It was dark, and it was raining steadily. We had stopped playing tag with the rain, it had well and truly caught up with us. In the accommodation brochure Holiday Inn was listed as having over 200 rooms with prices from £25 per person. so I suggested we try there. It was on the north side of the city. When we got there we found they had nothing but executive suites at over £200 for the night. The helpful receptionist rang a few other places for us with similar results - either full, or very expensive. Apparently Aberdeen is the oil capital of Europe, and gets very full during the week (it was a Monday night).

No doubt there was a room free somewhere in the area, but I had no idea how to find it quickly. We tried out towards the airport, and then we tried the south side of the city past the harbour. And went as far as Stonehaven, about ten miles south, where we located a phone box.

That's where we rang my cousins R and M in Perth, and said "we have a bit of a problem". Fortunately R and M, who run a b&b themselves, were not fully booked that night, and said we would be welcome. So it was onto the motorway and another hour and a half's drive south to Perth, where we arrived almost a day earlier than expected, at eleven at night.
Posted by Catherine at 10:17 pm

I too went ahead and signed for nablopomo. Hope I am able to post daily. In a moment of madness, I also joined for nanowrimo. God help me!

No room at the inn, indeed. That's got to be an uncomfortable feeling when you're traveling--not to be able to find a place to stay.

That's quite a distillery at Glenfiddich. Huge and kinda pretty. No Duff there tho...