We were reminded at church this morning that the eleventh hour of the eleventh day of the eleventh month is the traditional time to remember the sacrifices of those who have fought and died in past wars. And in my garden I have poppies blooming - known as "soldier poppies" - the sort that bloomed in the fields of Flanders among the battlefields and war graves.

The plaque below is in Coventry Cathedral, in the ruins of the old cathedral which was bombed out during World War II. Every Friday there is a service of peace and reconciliation held there. 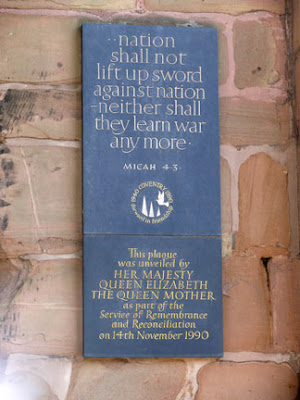 And on a lighter note, I have been watching Amazing Race Asia on TV for the last couple of weeks. It appears that an Asian production team have bought the rights. There is an Asian presenter (who seems to have studied Phil's wording and intonation), and teams from various different Asian countries, racing around the world, not for a million dollars but for a hundred thousand.

So far, it seems to be a bit bland. The reason? There has been very little evidence of the yelling, bitching, manipulating and back-stabbing that goes on in the American version. And when one team were penalised for coming last by having no money for the next leg of the race, every other team left money for them on the windscreen of their car. That has never happened in the US version.

It would be simplistic to say that Asians are more peaceful than Westerners, given the bitter sectarian conflicts that are going on in many Asian countries. There just seems to be a different dynamic, that Westerners don't quite appreciate. Which is why, in my opinion, Western intervention in Asian conflicts seems doomed to failure.
Posted by Catherine at 3:57 pm

I think it's more a sense of courtesy that you find with Asian cultures. Sadly, most Americans have lost that basic virtue. I say this as an American from the south-mid-west (Oklahoma.) It is really disturbing to see the rudeness and nastiness across the country. I don't think it's as bad here in the interior as what we see and hear from the coasts and more metropolitan areas, though. And I've met a many people from around the country that have said that people from this part of the country are just nicer and friendlier.

Hello, Michele sent me. It's very nice to meet you and your lovely blog.

the south african version of survivor had the same problem - evryone was just too p.c. and decent. terrible reality television the second series was "better" though - people behaved worse and more back stabbing.

Good point! And they still hold services in other bombed out churches in England as well.

A good point well made. Westerners have held the fort (pun intended!) for so long, maybe it's time we started taking on board the more positive qualities of other cultures instead of thinking we're the only ones who have got it right.