We set off from Penrith after breakfast and packing to explore the Lake District. First, we headed towards Keswick which is on Derwent Water, but we took a side road before we got there so that we could visit the Castlerigg Stone Circle. 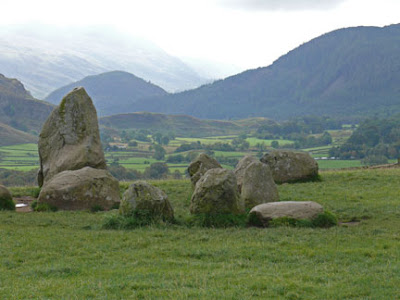 It may not be as large or as spectacular as Stonehenge, but its setting is magnificent, and it has the advantage of being free to visit! The photo shows just a small portion of the stones, but if you click the link above and scroll down you will see a view from the air which shows the entire circle.

We continued through Keswick and along the shores of Derwent Water towards Borrowdale. According to the Rough Guide, "it is difficult to overstate the beauty of Borrowdale" - well, that is a statement that is just begging to set one up for disappointment, so I decided to dismiss it as hype. It may be true or it may not, but it was difficult to be sure. We had the usual English problem of narrow roads with nowhere to stop when we spotted a fine view - none of the wide verges that you usually find in New Zealand. When we did find a car park, it was clearly intended for walkers. The car parks, even though out in the country, were all "pay and display" with minimum periods as long as three hours. And there locations were generally away from the view. Not very helpful since we just had the one day, and wanted to stop for five or ten minutes in a large number of different locations, rather than stopping in one location and taking a long walk.

As we climbed up out of Borrowdale, past the Information Centre at Seatoller (another pay and display car park, though we risked stopping long enough for the toilets without paying), we did find a slightly wider spot in the road where we stopped beside an attractive wooded stream. 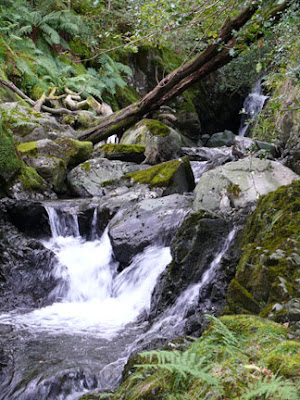 And then we climbed up (in the car, that is) to the top of the spectacular Honister Pass where we found a group of tourists in hard hats ready to explore the historic slate mines. We looked around here but didn't join the underground tour. This was the one place in Britain where we felt that the hills we saw made up in steepness and drama what they lacked in height - the road down the other side had a grade of 25%. 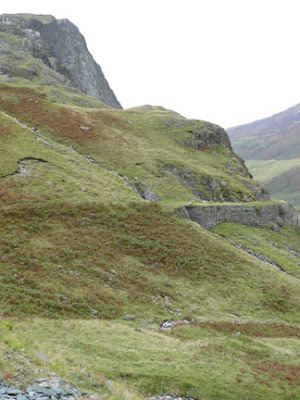 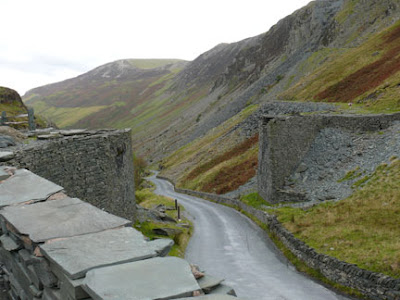 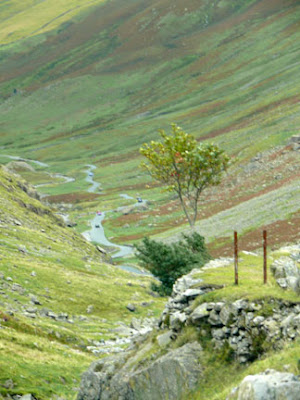 On the other side of the pass, we continued past Buttermere and Crummock Water: 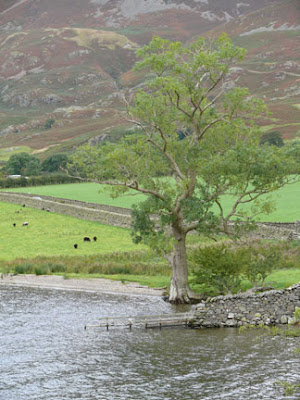 I'm not sure whether the wall is supporting the tree, or vice versa: 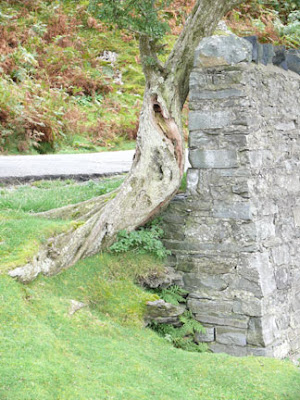 and then back to Keswick over the Whinlatter Pass where there was another visitor centre. That's where I spotted this sculpture: 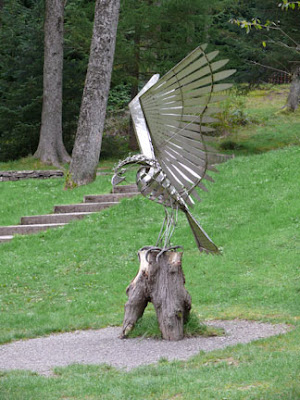 Again, we didn't stay long (another pay and display car park). As the road descended towards Keswick we had panoramic views of Bassenthwaite Lake. We ate a late lunch in a roadside picnic spot jut past Keswick (yes, we finally found one!) and headed south past Thirlmere, Grasmere and Rydal Water to the best-known of the lakes, Windermere.

The attractions in this area include various museums and cottages devoted to Wordsworth and Beatrix Potter. And in Keswick, we also passed up the Cumberland pencil museum, though I have found memories of my Lakeland coloured pencils from childhood.

Instead, we contented ourselves with enjoying the outdoor beauty of the area, though at Windermere it is rather crowded with tourists. There are two settlements, Windermere a little back from the lake, and Bowness-on-Windermere which is where all the boat cruises etc leave from. It was busy enough when we were there, and must be overwhelmingly crowded at the height of summer. The swans were incredibly tame and obviously used to being fed. They made a good attempt at eating P's camera. 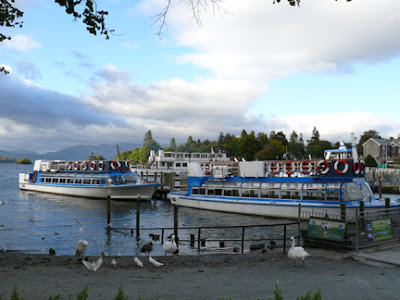 The gulls are not quite the same species as in New Zealand. Can any UK readers name these for me? 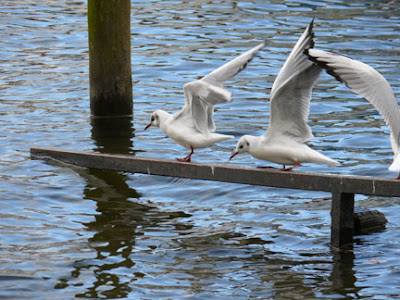 Finally it was time to head past the south end of Windermere and east to the M6, and hence along a tangle of motorways to our hotel at Manchester. The hotel was rather dilapidated - for instance the "down" button for the lift wasn't working on our floor, we had to summon it with the "up" button and then choose down when we entered! Still, we had a good reduction on the room rate by booking at the last minute. We ate in the hotel dining room - cheapish and basic with plenty of fries, but there was free wi-fi, so we caught up with messages from the family. And then it was time to spend a couple of hours repacking our suitcases. Airline security in the UK means that only one carry-on bag is permitted. In New Zealand and Singapore, I could take my handbag and camera in addition to my cabin bag. In Manchester they had to be packed in the cabin bag, hence spare clothes had to go in my main suitcase, and as for all the brochures I had collected, thinking I may collage a journal with them, I ended up leaving a large number behind.

Still, in the end we gave up trying to fit everything in one suitcase each, and took the extra small day pack I had packed inside my case and filled it up as well. I had my fingers crossed that we wouldn't be charged extra for overweight baggage. (I wonder if Americans ever experience this problem - I gather American airlines allow two bags per passenger, in the rest of the world it is one and a maximum of 20 kg, unless of course you are wealthy enough to pay four times as much and travel business class).
Posted by Catherine at 8:11 pm

A picturesque day for your last day in England.

I do enjoy this armchair traveling with you. I suspect I won't get to see these views for myself yet your descriptions are a delight.

I have given you an award - check it out over at my blog.

I think those gulls are called Mediterranean Gulls. In the breeding season they have a black head, but at other times of the year, they look just like these gulls.

You are right in that they are different to NZ gulls - I always thought that a seagull was a seagull until I moved to the northern hemisphere and saw how different they all were.