I Want that Job!

About two and a half weeks ago I signed up for a Ning account, as it is the "home" for NaBloPoMo. I had a little trouble - the autofill on my computer included my last name without my noticing, and I don't want to display that on the web. Try as I might, I couldn't find out how to change the settings, so I decided to set everything to "private", e-mail Ning asking them to deactivate it, and start again with a new ID, password etc.

According to the website e-mails are dealt with within two business days. So, yesterday I received confirmation that the account had been deactivated. Two business days in two and a half weeks? It sounds as if someone doesn't work very hard.

(And I really wanted the account deleted. I'm not sure that I trust that word "deactivated". It sounds as if it is still there, somewhere).

Actually, anyone I know in America tells me that we have far more holidays than they do. We are having a long weekend here this weekend, we get Friday off. Yay! Every province in New Zealand has a public holiday for the provincial anniversary day. Canterbury's is 16th December. Except that we don't have a holiday then. Some time in the 1950's the holiday was moved to coincide with Show Day, so that we can all have a day off to go to the A&P show and admire the tractors. Earlier in the week, the fashionistas sneak off work for a day and go to the races (Cup Day) where they compete for "best dressed" and drink too much champagne. A few people even watch the horses.

Of course, being spring, the weather is rather wild. Autumn is much more settled. There was even snow in parts of the country this week, and we're only a month off the longest day of the year.

I still have about a gazillion photos from our trip that I haven't posted yet, so I will post them at random. This one is a peculiar fungus that took my fancy in Glen Nevis, near Fort William in Scotland: 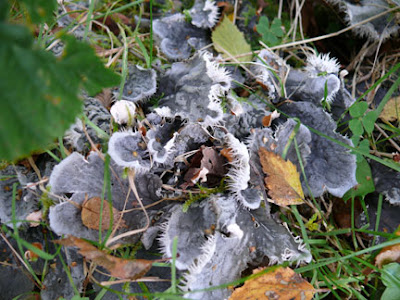 I'm looking at a long summer with no extra days off except for Christmas Day. But despite appearances, I'm not really complaining!