This is where time started to get confusing, because we left Manchester at around ten in the morning on a 13 hour flight, and arrived in Singapore around six the following morning. From New Zealand to Manchester it was a very long day followed by a very long night. and in the other direction we had a short day and a short night.

We didn't have a window seat - we were in the middle of the cabin - so I spent the time writing up my diary, reading and watching videos. And eventually after it got dark, tried to catch some sleep. By the time it seemed to be late enough though, it was already getting well towards morning on Singapore time, and around 3 a.m. Singapore time the cabin lights went back on and breakfast started to come round.

When we arrived in Singapore we found the Singapore airlines desk for our stopover package, where we were to wait for the free shuttle bus to our hotel. Eventually our hotel was called, and we loaded our luggage, boarded the bus, and did a tour of several hotels before arriving at ours.

After settling in, we discussed which tours we wanted to book. Eventually we booked a couple of tours for the next day, and headed out to look for a bank to change some traveller's cheques. Being Saturday most of the banks had closed. But we found a money changer whose rates didn't look too bad, and then we went exploring.

While looking for a bank, we found an indoor bazaar. Most of the stalls were selling cheap tacky nick-nakcs, but some were selling fruit and other food items. We bought drinks which were basically fruit whizzed up with ice and water. 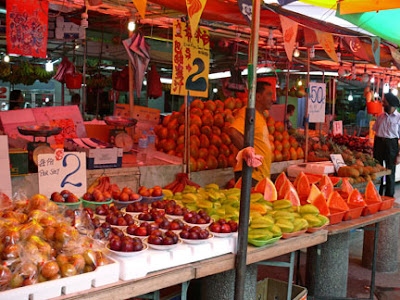 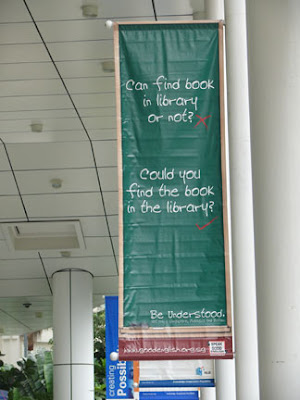 We ended up at a six storey shopping mall devoted entirely to consumer electronics. P was looking for a particular gadget for his computer (an interface card I think, I don't talk much geek talk). He didn't find it, but was given suggestions for other shops to try.

There was some sort of computer game tournament going on on the ground floor: 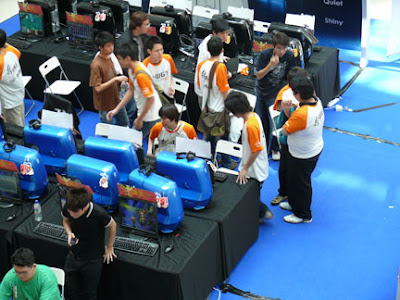 These children were playing on a large electronic game mat. The game changed often, but the rules each time seemed to involve jumping on moving targets to score points 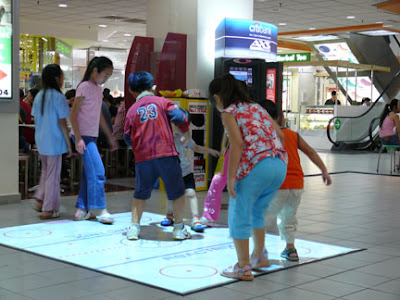 On one of the levels there was a store which seemed to be a music studio. The children were being presented with certificates and were then posing for photos for their proud parents: 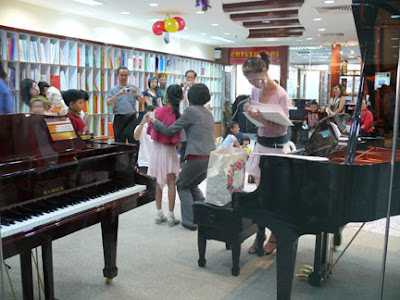 After we explored the mall and bought lunch, we continued as far as the riverfront: 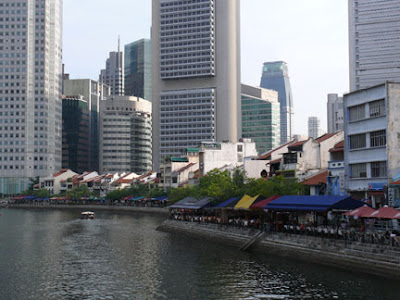 before heading back to the hotel. We were tired and didn't want to go too far for dinner. There was a big restaurant complex over the road, so we looked all around and found one where the prices seemed only moderately expensive instead of outrageous. And then headed back to the hotel to bed.

Night view from our hotel window: 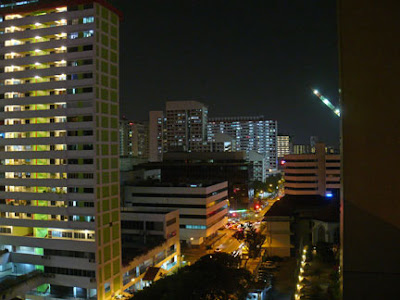 (I never did get to writing up my diary for Singapore, and I find some of the details that I was convinced I would remember are now a bit vague. Oh well...)
Posted by Catherine at 10:24 pm

I can get a good sense of what you experienced. Was it hot? Have you completed your trip write-up now? Well done!