Of course we expected to see castles, crowded motorways, stone circles, and all the other things that are mentioned in the tourist literature, but these are some of the little things that took me by surprise (although some of them are fairly obvious, with hindsight): 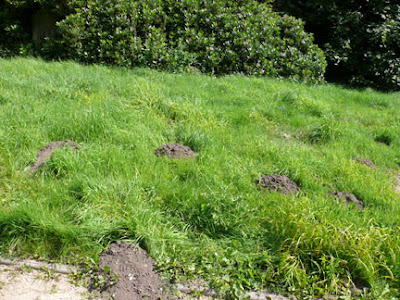 2. Road signs directing football traffic. In one town, the signs even directed "home traffic" and "away traffic" in opposite directions. I guess they have them enter the stadium at opposite ends and try to keep them apart to save fights.

3. No personalised plates on cars. At least, I thought there were no personalised plates until I met my cousin , and she turned up with a plate that said A13 and then the last three letters were her first name. Apparently the plates have to stick to a fairly strict format, which takes most of the fun out of it. No HIHOAG or REDQT or MYTAXI or K9DOC or D8LESS

4. Cottages that weren't. When I think of a "cottage", I imagine a wee one storeyed one or two bedroomed house set in a garden. In Britain the villages are very compact, with houses nestled right up to each other, and with their front doorsteps right on the footpath. They are labelled "cottage" even though they are usually two storeys high.
It took me a while to realise that they do actually have gardens - they have quite big long backyards, you just don't see them from the street.

5. Which is probably the reason for no 5 - blooming baskets everywhere. We do have hanging baskets in New Zealand, but not nearly as many, probably because we tend to grow things in the ground more. In the cities in the UK, spare dirt is at a premium, hence the hanging baskets. Being late summer, they were probably at their best when we visited. 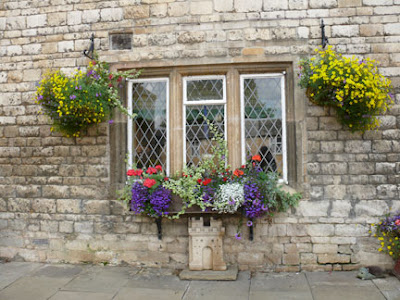 6. Jet trails. I expected more traffic on the ground, but it didn't occur to me that there would also be more traffic in the sky. I've never seen so many jet trails in one place. 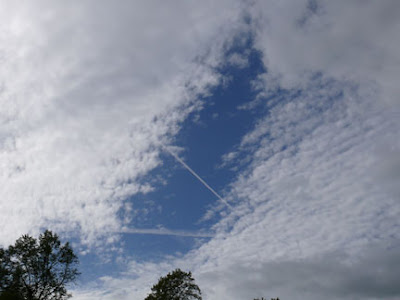 7. Laundry detergent. I was surprised to find there was no cold water laundry detergent, and no cold water setting on the washing machines. Instead, consumers are advised to save power by washing at 30 degrees C. Most people in New Zealand wash in cold water to save power (but we make up for it by spending far too much on heating, because our houses aren't well insulated or double glazed, unless they are very new).
Posted by Catherine at 10:26 pm

Hi Catherine. I remember being surprised at the cold water washing when we visited family in Australia and I rarely use hot washes now. I prefer flowers in the ground to hanging baskets and have given them up altogether although I do have some tubs.
I know you missed the West country and I have photos of Exmoor and surroundings on my latest post.

If I'm not mistaken, the UK is situated under a large number of international air corridors. It must be fun to see all the intersecting contrails: I love the picture you've captured.

Actually, I love all of them. I've always enjoyed your view of the world. It's so refreshing!

I love the windowboxes! Gorgeous photos. (I need to get out more!)

I like that you pointed out the things that are overlooked usually when describing a place. I know from having lived in different places in my life that it's the "small things" that end up taking greater importance.

Many interesting and informative things in this post...I LOVE the picture of Molehills....Cathching up here on your trip? I keep thinking about how amazingly wonderful it was....All that you saw; All that you did; All the wonderfully interesting places you visited---This was a "TRIP OF A LIFETIME", dear Catherine, but you know this better than anyone.....

My computer is acting odd tonight, I tried to leave my comment before but it disappeared!
I really enjoyed your comments on the UK, I've always wanted to go & see it (heck, I'd like to go anywhere but the US- but I have kids & a mortgage & no extra money for travel, maybe in time) & I liked your insider's view, I'm so glad Michele sent me to visit you tonight.

Hello, Michele sent me...It was so interesting reading this post about things you found on your holiday. I am always fascinated by other countries and how folks there live. Thanks for sharing with me...

I am thinking I may borrow your idea since I was just recently tagged again...for the 7 things about...and maybe do it on my state. Would you mind if I borrowed your idea????

I think if I was to visit Britain, I would be surprised to see all of the jet trails too! Thinking about it, I wouldn't know why they wouldn't have any. lol. I am in a vast farming area in Iowa, US. I can't count how many I see a day. (I only notice them because my three year old is sure that it is aliens flying overhead.)

Thank you for sharing the lovely pictures!

Thanks for visiting my blog.

I hope you win some of Nat's Art!

Great post! Love the molehill photo. I wonder why the owner of that piece of land hasn't "done" something about them.

That was interesting ... esp about no cold water washes.

Interesting to see your comments about UK. You are right about the number of planes. In the morning, early, they stack over London and land at roughly 90 second intervals. I can sometimes see 10 or 15 planes in the sky at once from the ground when its dark.

There are quite a lot of personalised number plates but you probably need 'British eyes' to crack the code where 5s and Ss are interchangeable and so forth.

Catherine I always wash at 30degrees and get cross when my Lodgers wash at a higher temperature. But I've never seen a washing machine with a cold wash - I'd definately look into that if my machine needed to be replaced