Not only is our trip over, but the writing of my trip diary is fast approaching, and what will I do then? Never mind, I still have quite a few photos that wouldn't fit in any post so far, that I still want to entertain/bore you with! (Many of them are close ups).

We had a good sleep in after our late night. Robert and Maggie had one other guest couple in their lovely b &b, Cherrybank Guest House, and we had arranged that we would breakfast at about nine, after their paying guests were dealt with, so that they could join us over breakfast and have a good chat. Yes, I have broken my rule about naming names on my blog. That's because I think our hosts deserve a bit of free advertising. Cherrybank seemed from the website to be very little more expensive than any of the other b & b's we stayed at, and the basic facilities were similar, but there were just so many little extra touches that made it special. Extra useful bits and pieces in the bathroom like tampons and disposable razors (we didn't need them, but I could imagine some people finding them very useful if caught out). And at breakfast, we were offered a menu instead of being asked whether or not we wanted a cooked breakfast. The buffet not only had the usual range of cereals, yoghurt, milk, jam and butter for our toast, but a wonderful selection of fresh fruit such as strawberries, raspberries, melon and pineapple to have with our cereal.

We enjoyed our chat and then thought about what we would do for the day. The original plan had been to visit Dundee on our way from Aberdeen to Perth. My grandmother, who died not quite two years ago, a month short of her 104th birthday, was born there. However we had passed Dundee in the dark the night before, and we decided not to head back.

Instead, we first drove through Perth and a mile or two north to Scone Palace (pronounced "Scoon"), the home of the Earl of Mansfield. 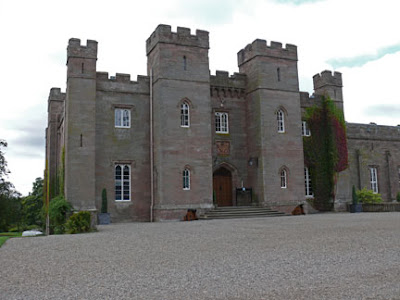 The usual "no photographs inside" rule applied. The brochures suggest that Scone has the atmosphere of a friendly family home - well, it was very much grander than any family home I have been in! However there were a lot of family portraits, both old paintings and more modern photographs, which did give it a personal touch.

We visited the gift shop to look for items to take back to the family at home. I was surprised that there was none of the usual shortbread, fudge etc. But the mystery was solved when I asked about toilets. "In the basement through the food shop" I was told. Not one, but two gift shops! Well, you have to get money out of the tourists somehow!

Scone is the ancient crowning place of Scottish kings. It has extensive grounds with some very friendly peacocks strolling around: 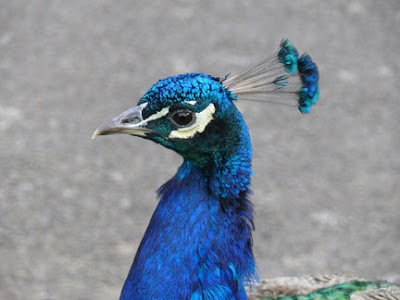 This one wanted my lunch: 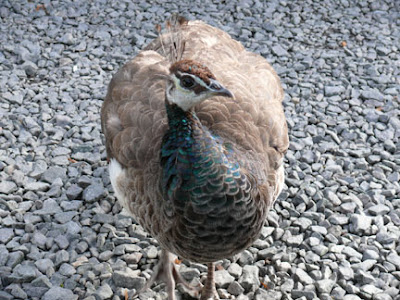 After leaving the palace we headed off towards the East Neuk of Fife. I'm not sure what "Neuk" means - perhaps "coast" as it is a stretch of coastline with a number of picturesque fishing villages. Unfortunately (or perhaps fortunately for the atmosphere of the area) there are no motorways or major roads, only local roads, and though the route is more or less direct there are enough little kinks in the route to make navigating tricky - and enough villages on the way to slow us down.

We got as far as the coast, just, at the village of Elie: 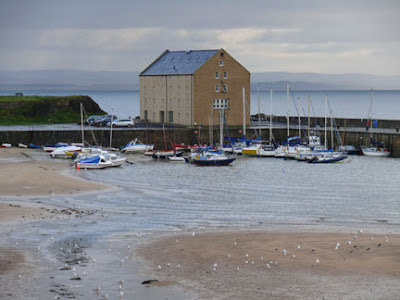 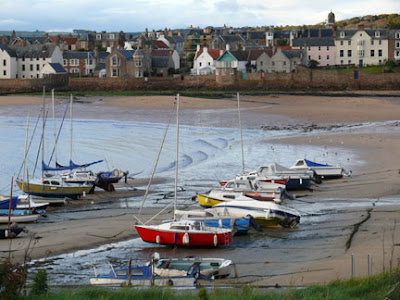 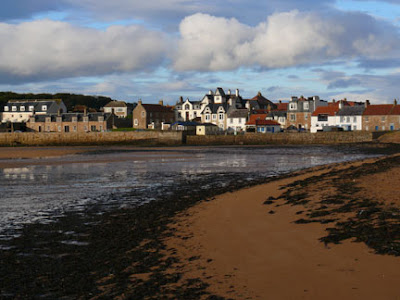 but after a photo stop, we had to turn and head back, to be on time for a family dinner. (Actually, we were fifteen minutes or so late. Maggie told us "the dog has your dinner" - a good thing they have no dog!)

We had an enjoyable dinner with Robert and Maggie, Robert's brother and mother, and took photos for the family album.

Next day - we disccover some more family members - two centuries old - and we leave Scotland.
Posted by Catherine at 9:11 pm

Catherine...I have been catching up on the posts I have missed...!! What a fabulous trip...So many wonderful places and so very many wonderful pictures...You could make a book out of this whole trip!
Back a few posts ago there was a picture of the countryside all greens and with the sun on it---BEAUTIFUL!
And so very many other ictures too---But that one popped out at me, in particular....GREAT GREAT TRIP!

Michele thinks so, too!

Oh, and the bee on those gorgeous flowers...Just wonderful! And The Peacock...What s fantsstic colors...!
Like I said...So very many interesting and special photos and memories you have created for yourselves....!

catherine, so glad michele led me to your blog. being a scottish/irish gal, i love your photos! i hope someday to travel there.

b&bs are great, aren't they?

what a fantastic experience. cherrybank seems lovely. i hope i get to visit some day. your photos are great, too. i especially loved the close-up of the peacock with his brilliant blue plumes. stopping by via michelle. ;)

Hi Catherine! It seems like you've had a wonderful trip. Wow, seems there's quite a bit of longevity in your genes. Which means you should have plenty more time to roam the world, write down your impressions and have plenty of beautiful photos to show for it. Michele sent me today. Enjoy the final bit of your trip!

Michele sent me over to see you, Catherine.

The pictures of the coastal village are lovely, Catherine. I don't know what Neuk means either. But it's a very picturesque name!

As houses go, that palace seems quite grand on the outside. It's too bad they don't allow photographing on the inside--I'm sure it was quite impressive.

That's the most castley castle I've ever seen. And I loved the beautiful peacock photos. The blue is so rick and vivid.

Michele sent me to enjoy part of your journey. :)
~S

I LOVE the castle! I've always wanted to travel...I hope to visit Scone Castle someday! I love the photos, they're excellent and your trip sounds FANTASTIC.

You will want a bag carrieir next time won't you, right??

Sounds as though you have had fun, and I love the bluer Peacock. And that shot of the boats withe the tide out is awesome!

burntofferings and more at bernies fotoblog