The photo below wasn't very successful as a photo. It was taken from a moving car, late in the afternoon, when the light was less than I realised.

It did, however, inspire a poem. The other inspiration was the first line (in italics) which was taken from a poem by Jeffrey Harrison, The Same River, which was the poem for Sunday 9 September at Poetry Daily

Yes, yes, you can’t step into the same
river twice, and I can’t cross
the same bridge as my ancestors,
but all the same, this bridge is one of the things
that has changed least since you lived here,
linking the village with the quarry, on narrow roads
meant for horses. On both sides now
the stone houses, clean and prosperous looking,
country retreats for the middle classes,
and cars pulling up at the inn, in the twilight.
There were weavers and washerwomen once.
Where are their rough cottages? Pulled down,
or renovated, made large enough for small families
to sleep one to a bedroom. Your seventeen children
one by one left their shared beds
to trudge over this bridge to distant cities
in the hope of work. Look, here are photos
I took from the car window. Have I captured
your ghosts? I see only a blur. We are moving
too fast.

And here is the bridge: 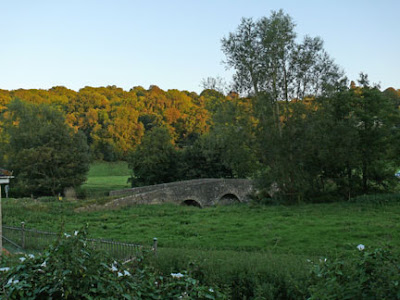 I like how your bridge spans time and class. Well done.

what an absolutely lovely poem.. i too sought to see the ghosts....

The idea as lovely as the execution.

I love the idea of looking into a places past, especially when its your family's past as well. Excellent.

What an "entrée" -- and I'm not talking about Harrison's line, but on how you enter into it. Nice.

Love the idea of capturing the ghosts of all those that crossed the bridge - this is such an emotionally evocative piece.

This is one journey I would like to take too.

That last line is awesome!

This work is so stirring and evocative of life and passing time. Absolutely stunning!

I really like this poem. SLOW - not just for food anymore

You captured the idea of bridges so perfectly! Connections is what it's all about! ~Linda

Love the sense of time and place you have in this poem.

i really like this poem and i agree with gautami, the last line is perfect!

I like the poem and also the photo. There's a sense of mystery and otherworldliness in both.

Sometimes when we move fast it takes a while for the soul to catch up.