The two villages I wanted to visit on our way out of Scotland are not in the tourist books. They are the villages of New Cumnock in Ayrshire, and Kirkconnel in the neighbouring county of Dumfriesshire but only a few minutes away. My father's maternal grandmother came from this area and I have done a lot of research on her family.

I arranged to meet up with a distant cousin V who has helped me with much of the research in the early afternoon. Before leaving Cherrybank we caught up with our internet, made a booking for a hotel in Manchester (cheap last-minute hotel rooms - there are quite a few sites for these) and tried to check in for our Singapore flights online. The Singapore airlines website was down for maintenance for several hours! (Why it would take so long I don't know, since all the coding can be done off line and then uploaded in a few minutes, surely?)

Eventually just before we left the site came online again and we were able to check in and print out our boarding passes on Robert's printer via flash drive. Theoretically, you can choose your own seats. However since the airline pre-allocates all the seats, there are only a few unbooked seats available for changing to, so we were unable to get our preferred seats.

We set off and made a quick trip past Stirling (a last look at the castle), through Glasgow on the M8 and south as far as Kilmarnock on the M77. At that point we left the motorway. The quickest route south from Scotland would be the M74 motorway through Lanarkshire to Gretna, but that was further east than the villages I wanted to see. Instead we took the A76 which is the main route from Kilmarnock to Dumfries. The road goes straight through the middle of both villages.

I had arranged to meet V at the police station in New Cumnock where she said there was parking. We stopped to ask directions at a local shop (newspapers, confectionary etc), and were told it was just up the road but that it wasn't the police station any more, in fact it had closed.

It seems that the whole of New Cumnock has closed. When we had met V, we looked for toilets, and found that it the library was closed on Wednesday afternoons and the community centre was also closed. We went to look at the cemetery where my greatgreatgrandmother's gravestone was, however it seems to have gone. There are quite a few broken gravestones that have been stacked up along a terrace - with the inscriptions facing inwards! - so they can't be read.

The boarded-up Crown Hotel - a cousin of my grandmother's is recorded as working here in the 1881 census. 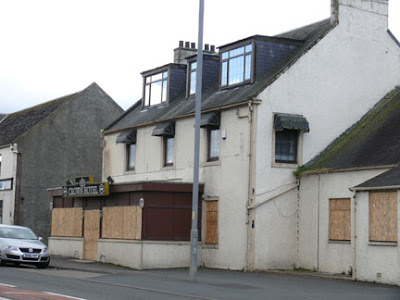 Window in the apparently disused church: 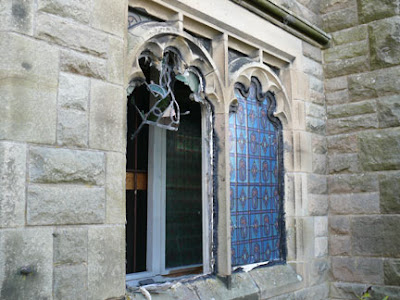 New Cumnock was a mining village and when the mines closed sometime mid to late 1900s there was very little work left in the area.

This must also be true of Kirkconnel, but the village seems to be much better kept and with more life to it. 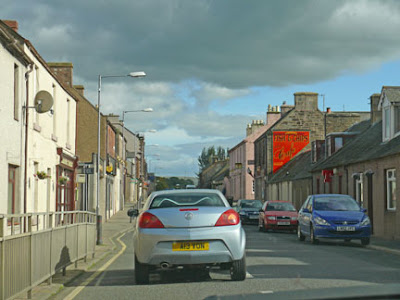 The houses are much as they were in the 1800's, renovated but not really altered: 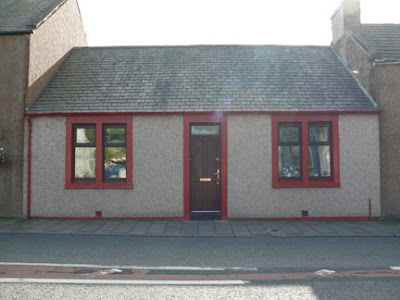 There is a heritage centre which has had a lot of lottery funding. We went in there and when V mentioned the name we were researching, another "customer" piped up "her mother was a --- " pointing to her companion. P pulled out the laptop with my genealogy files and we were able to locate where she fit the family tree and identify that she was a fourth cousin, previously unkown to me.

We headed on up to the graveyard at the church and hurried round photographing all the gravestones of that name. 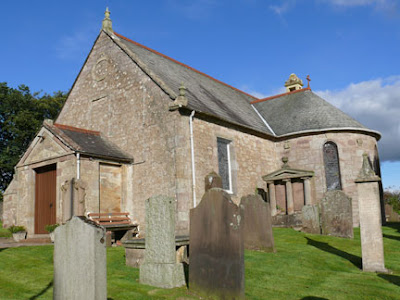 I was in for a surprise. I spotted another gravestone, with the maiden surname of my greatgreatgrandmother. When I studied it after we got back to New Zealand, and figured out the rather worn inscription, I realised that buried there were her brother, parents, and grandparents - the names of the latter being previously unknown to me. This was a great find as they do not appear in church records, and lived too early for other records to be of help. Why they were buried there and not in the neighbouring parish where they farmed, I have no idea.

We then drove down the A76 which travels through Nithsdale, the valley of the Nith River, to Dumfries - though we took the ring road round Dumfries and east to Gretna. The view is of lowland Dumfriesshire, looking out to the Solway Firth and England, from the A75. 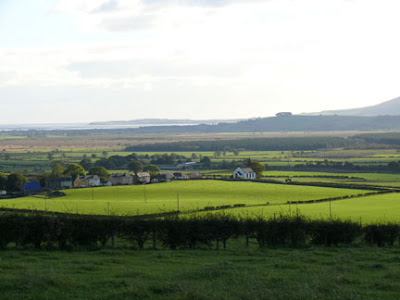 Gretna is a separate settlement from Gretna Green, it was a planned town at the time of World War II as it was the base for a huge munitions factory. We pulled off the main road and went into Gretna, because road signs pointed to "local services" including toilets. The "services" weren't of any service as they were locked up - apparently because of vandalism. 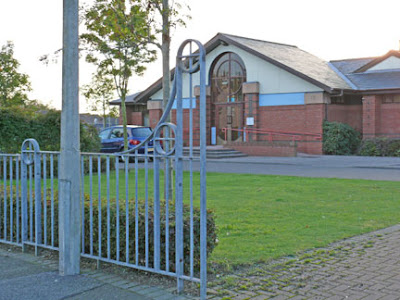 We went on, but fortunately shortly came to a big outlet shopping centre which was open till six and had good clean toilets. It was about ten to six so we didn't do any shopping but did note that there was a huge Cadbury chocolate seconds shop. Unfortunately it was clear our bags were going to be overweight already so we didn't buy anything.

We crossed the border to England, reached the M6 around Carlisle and continued another 15 miles or so to Penrith where we stopped to look for accommodation.

Penrith is an attractive red sandstone town and is a conservation area. I took this photo of the castle from the car on the way into the town: 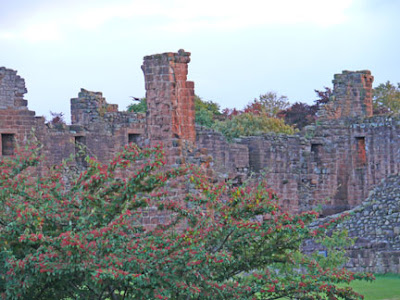 It's not part of the Lakes District but is a good base for continuing to the Lakes District. We found that it was the opposite of Aberdeen - busy in the weekend (and no doubt all summer) but quieter in the week, so when we located the main street into town that had a row of b&b's we were spoilt for choice - nearly all had "vacancy" signs up, and I checked half a dozen before choosing. In fact they all seemed fairly similar for facilities and prices.

We asked for recommendations for where to eat, and walked into the centre of town (if it's a town - it was only a couple of blocks away) where we eventually chose to eat at the Gloucester Arms,a historic hotel, part of which dates back to 1477. Supposedly Richard III slept here when he was Duke of Gloucester. P had taken his camera and got some good photos, I had left mine as I thought it was too dark. After dinner we walked up to the castle and P took some very nice photos of the castle by moonlight, while I was left regretting not taking my camera (although his does better than mine in low light, I think).

The next day - we explore the Lake District and arrive in Manchester
Posted by Catherine at 3:18 pm

You are doing a stirling (excuse pun!) job with this log of your travelling Catherine. I appreciate the report and pictures. I guess the end is in sight - regretfully, but with some relief?

Wow, these photos are amazing. Thanks for showing us this corner of the world.

Website maintenance shouldn't take long, but server maintenance (eg adding extra memory) can take much longer. I'd have expected a large company to have a back-up server, though, but <shrug>.