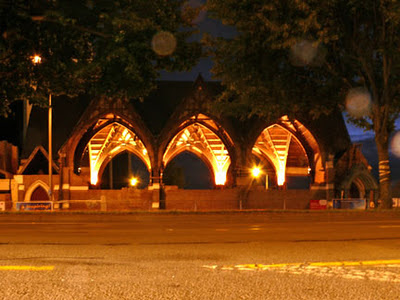 Knox Church in Bealey Avenue featured heavily in news footage of the February 22nd earthquake as it is on the edge of the area that was the red zone cordon. It provided the backdrop for much of the commentary on the badly damaged state of the city's many old Anglican churches - despite itself being a Presbyterian church. Much of the brick cladding had fallen off. Since then, almost all the rest has been gradually taken down. The structural supports and the fine timber ceilings, however, are largely undamaged and I understand the church is to be rebuilt. In the last few weeks, the building has been lit from within at night as a sign of hope for the future.

At a media briefing today, scientists finally revealed what we had begun to suspect - that aftershocks may go on for decades (9500 so far). As the briefing came to an end, fittingly, a 5.0 aftershock struck.

It was a long rolling shake, not one of the jolting ones that are much more adrenalin-producing. These days, we don't seem to be bothered much by anything under about 5.5. Even the animals at Orana Park, apparently, are not bothered by the quakes any more. The rhinos which initially were very unsettled by it all, nowadays just lift their heads for a moment or two as if to say "oh, another one?" and go on grazing.
Posted by Catherine at 10:31 pm

Thank you for posting this ‘After Dark’ picture. It serves to remind those of us who are far away, just what happened there last year. I lke the church being lit from within as a symbol of hope too.

Beautiful picture, love the way the church is lighted.

Yes, I love the symbolism of this too.

I spent a while admiring your photo before I read your post.
It's symbolic nature hit me later as I read on about the quake and the after shocks.

I love the church all lit up - well what is left of it! So sad that the earthquake destroyed so many fine buildings - and so many fine lives.

I would hate to live in an earthquake zone!

This made me think of giant beehives!