1) Pantihose: Most of the time I wear trousers, but when spring comes I start to feel all girly and like to wear skirts and dresses sometimes. Which means pantihose. Because face it, I'm not going to frighten my coworkers by displaying my startlingly white and slightly hairy legs. And it's a lot easier to put on a pair of pantihose than to shave my legs and apply a fake tan.

I used to buy the size marked "tall". And then I started to look more like a Rubens than a Modigliani. So I figured I needed "extra large". Somehow they always end up slipping further and further down my hips during the day. That's when I realised, though the average width ones come in different lengths, the larger ones are all made for short fat people. I think I have it solved, I ignore the sizing on the back of the packet and buy the extra extra fat ones, so that they stretch lengthwise instead of widthwise. But, really, you'd think the manufacturers would realise that there are as many tall fat people as short fat people, when you just have to go and look around the street and see them.

2) Dr Who: I was watching last night, and I suddenly realised something. Britain is a very dangerous place! Apparently whenever aliens reach earth, or there is a warp in the fabric of space-time, releasing all sorts of horrors on the world, it happens in Britain. Never anywhere else. OK, there is a little variation - it might be London, or Cardiff, or the Scottish highlands. But the UK is a rather small island, along with a few even smaller islands - and yet the aliens never land anywhere else. Maybe I should think twice about planning a visit?
As for the London Olympics episode, well, in this household we are agreed that it wasn't very good. Last week's was great, maybe they used up all their good ideas.

3) Richard Hammond: Get well soon. Top Gear wouldn't be the same without you!

4) A photo: this is kowhai, a New Zealand native tree that flowers in springtime. Just one of the things I love about the season. 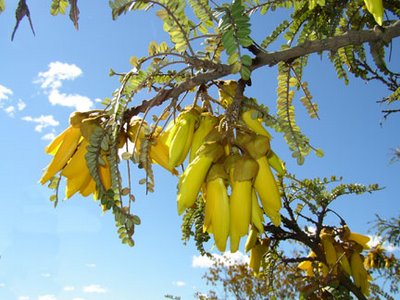 Haven't worn a pantihose in ages! I love capris :) and I can wear them all the time because I am not an office lady, I am a SAHM (although I don't like the term but it is precise!). Love the tree and the gorgeous flowers!! never seen anything like it! happy friday to you :) via Michele's

Oh, I see your friday is almost over, happy weekend, then!

Those flowers are beautiful!

Those flowers are really cool! I don't relate to pantyhose or Dr. Who, so can't say much about either. i can mention that Michele says hello though.

Beautiful photo! I love fast cars, but can't stand Top Gear. I can't believe how often it's on in Europe. But I'm very sorry about what happened to Richard Hammond and hope he is much better very soon. As for strange things happening in England - 'tis true, even without science fiction television shows. :)

Have a great weekend!

you know, I HATE hose - in fact, the last time I wore them was my wedding. I just shave my legs and embrace my inner whitie... and trust me, I have such white legs that I can strike drivers snow blind in the summer!

Oh, and Michele sent me.

Pantyhose are the worst. I used to have this job that required I wear them every day....I worked there for almost three years. It has been four years since i worked there, adn I have hardly worn them since. I'm sure my white legs are scary, but I just stopped caring.