...is the theme this week at onedeepbreath.
Strictly speaking, I shouldn't be writing autumn haiku. Unfortunately there is a lot of ocean in the Southern Hemisphere, and therefore fewer people, and our seasons are always out of step with the majority. Or perhaps they are out of step with us? After all, the majority once thought the earth was flat, but that didn't make them right.

Haiku are all about being fully aware of the present moment. So a haiku written about events of six months ago isn't really a haiku. In fact I see that as more important than a strict 5-7-5 syllable count. Nearly all Japanese haiku translate to fewer syllables than that. Many words that are two syllables in Japanese are one syllable in English - pine, wind, pear. Rose is three syllables in Japanese. (Although there are exceptions - chrysanthemum, for instance which is shorter in Japanese). Apart from that, there are little grammatical words in Japanese that aren't translated into English. So I feel that 5-7-5 can be too wordy in English, and detract from the simplicity of the idea. Occasionally though, one of my haiku falls close to 5-7-5, and in that case I give it a little nudge. Both of today's efforts fall into that category.

Every autumn the godwits gather on the Christchurch estuary prior to making the long journey back to Siberia and Alaska. The park rangers organise an event: "Farewell to the Godwits". It makes me smile to think of the birds all lining up with their suitcases and waving goodbye. In reality, of course, they never leave on exactly the day the event is held. The date is fixed according to the day of the highest tides (which depend on the phases of the moon), so that the birds will come closer to the shoreline and can more readily be viewed through binoculars. There is a sausage sizzle, and local Maori tell legends of the estuary and of the birds, and sing waiata (songs). 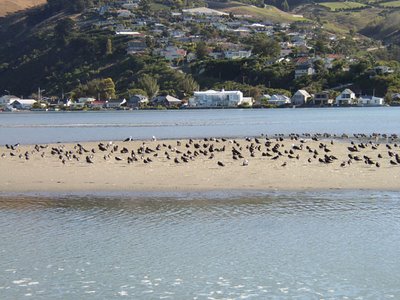 sausages sizzle
our stories and waiata
farewell the godwits
Posted by Catherine at 5:41 pm

That is lovely! And I love the photigraph, too, A Lot!
Here from Michele's tonight...(Well, it's night here in Los Angeles...Just about 11:20pm.

Wonderful haiku, to match the photo. What a great story! Thanks for sharing the info, along with your terrific poetry.

makes me want to be there in the fall... love your haiku

gorgeous photo and the haiku says it so well.

Lovely idea to link the human migrations in the planes with the godwit migrations.

Whether orange, red, yellow fall or godwit fall, you captured the essence! Such a cool story and very nice haiku! Thanks for sharing this moment! Where are you?

I love the old traditions of the Maoris. I really do. And nothing beats a good sausage sizzle!! (Any excuse! - Birds flying to China - heck, lets throw a sausage sizzle!)

I'd never even heard of Godwits before, Catherine. There sure are a lot of them in your picture.

Regarding your comment on my blog: I had no idea that Phil was from New Zealand. He's such a great host. Somehow he just projects likability. Yet another reason I watch TAR!

Lovely photo and haiku! I'd love to be there!

Godwits are new to me too...and it's so terrific to have you participate to expand horizons and remind me that even the seasons are relative ;-) beautifully written account

Great photo and haiku. As noted above, it's nice to get a different perspective on autumn, so thank you!

First- love hearing about your area Second- great haiku, even from memory
Third- great photo, too

Loved the picture, haiku, story and their names :)

I love the imagery of the poem. Great photo too!