Writers' festivals seem to promise more than they deliver. A large asembly of locval, national and international writers need to be crammed into a few days. Sessions are planned which throw together three or four writers around a loose theme - "women's writing" or "historical fiction" or "writing about India". These are advertised under a clever title, with an intriguing question eg "what is our fascination with India?" or "is there such a thing as women's writing?"

In fact when I went to these sessions, I found that the topic was only very loosely addressed. The chair person asked each writer a few questions. Answers wandered onto other matters. Each writer read a passage from his or her book. A couple of questions from the audience and then it was time for the next question.

Is there such a thing as women's writing? Some of the panellists drifted off into whining about how hard it is for women to find time to write. This seemed to be based on the assumption that women today have fulltime jobs, and do all the housework and childcare, while the men lead pampered lives. It was refreshing that one of the panellists said that it had been easier for her beacuse she had worked part time, and that it was hard for men too. Then they agreed that it was actually harder for fiction writers because they don't get paid an advance, while non-fiction writers generally do. That was interesting because I had always assumed that for the vast majority of non-fiction writers one would write the book and send it out when finished, in the same way fiction writers do. Another panellist commented that the best thing that had happened for her writing was that her husband left. Now, she is busy with work, house and children for twelve days, and then she has two days entirely for herself which she devotes to writing while the dishes pile up on the bench. My opinion is that it is important to have the desire. Given sufficient desire, anyone, man, woman, working or childrearing or both or neither, will find the time somehow.

The session on "Indian Ink" yielded one rather bad short story writer (I thought her story was a superficial look at India from a Western point of view), one very experienced journallist, and an Anglo-Indian novelist.

Far better than the panel sessions above, are those labelled "in conversation with". This morning I heard a wonderful discussion entitled "East and West" where a local writer and publisher talked to Christopher Kremmer, the journalist author of "Inhaling the Mahatma". He had the audience riveted for an hour, then we all rushed out to buy his book and have it signed. He has also written "The Carpet Wars" on Afghanistan, and "Bamboo Palace" on Laos.

I also enjoyed "Poetry for Lunch" with a wonderful selection of local, national and international poets including Felix Cheong, a young poet from Singapore. I was fascinated by the way in which he was able to write in different voices, including a suicide, an abused wife, and a stripper. He told us that when he was doing his Masters' in Creative Writing in Brisbane, Australia, instead of writing in cafes, he used to go and write in strip clubs. He talked to the strippers and tried to get inside their heads (he hastened to add, "not inside anywhere else"!).

More on the Christchurch Writers' Festival, including the various writers, here.

In between sessions I moved my car to the carpark in the Botanic Gardens, because it's free. Then I strolled back through the gardens and the Arts Centre, taking lots of photos. In the Arts Centre I stopped for lunch. On Saturdays and Sundays there is a large contingent of vans selling ethnic food. On Friday only the Lebanese stall was there. I bought pita bread filled with chicken, hummus and salad and chatted to the owner. I commented on the photos of Lebanon displayed on the stall. "It's a beautiful country" she sai, "everyone wants it." And then she said "there's one land missing." I was confused, until she said "like that game with the chairs." "Musical chairs?" "Yes," she answered, "there's not enough for everyone, there's one land missing."

The millwheel in the photo is all that remains of an old flour mill dating back to the 1850s. This is one of the photos I took on my way through the city from my car to the festival venue. 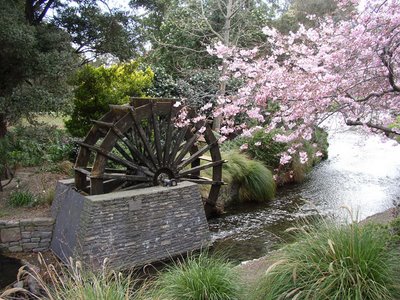 Posted by Catherine at 2:27 pm

I haven't been to many conventions on a specific topic like this one, but the ones I HAVE visited - the "conversations with" type of session was always better. :)

Very good post, Catherine. Your writing skills are in evidence here. Like you, I find a lot of would-be writers do a good bit of whining. It's not very constructive and encourages a mindset where it's allowed, even admired, to fail. As long as you fail loudly in a whiny voice. LOL

I find the statement by the Vendor that there's one country short in the Middle East to be quite apt. And your picture of the mill wheel is lovely, Catherine. Great work.

Michele sent me to see you!

My first visit to your blog and I shall take a look around. The description of the convention is intresting and the debate about enough time to write. Don't forget that NaNoWriMo is coming up in November and is an ideal time to wrie. I tried it last year and despite the mad effort it was fun and I'm already thinking about 2006.

Hi Catherine,
I'm from Brisbane Australia - Felix Cheong sounds like and interesting guy, I suspect we'll see him at next the Poetry Festival that's looming. The writer's Festival has just started here, but I'm 'on holidays' at the moment and am trying to limit my activities :)

If its not to gauche of me to say so, Janet Frame is one of my favourite writers.

ps I agree with the others, lovely photo.

Sounds like the conference was a good one, despite the whiners in the crowd. And I agree with you, there's no substitute for hard work and persistience.

The photo reminds me a bit of where the Dodge festival is held.

Oh, and you may want to try NaMoWritMo, as suggested in an earlier post. I tried it two years ago but couldn't keep up. Fortunately, there's a NaPoWritMo for April (I think).

I love that photo!!!

From Michele's. Beauty pic. Sounded like an interesting day. Could unpublished authors go? Wish we had more of that in Canada.

I find that most writers on a panel discussion treat the nominal topic as merely a whimsical suggestion. But I mostly go to science fiction conventions, not serious conclaves.