Last Saturday morning I met my poetry group friends for brunch at a great little restaurant that was new to me, the Oddfellows Cafe. It was hard to choose from the menu, but I settled for pancakes with fresh berries, yoghurt and maple syrup. Great food, great poetry, great friends!

Just down the road from the restaurant was the Addington Cemetery. Seeing it reminded me that I have been intending for quite a while to take a look, as two of my greatgrandparents are buried there, along with some of their children, their son-in-law (my greatgrandfather), and several of his children who are identified only as "stillborn".

One of them was my grandfather's twin. My grandmother told me that my granddad was the weaker of the two, and they were so busy attending to him that the other twin died. She said he had twin brothers who also died - the later burial doesn't identify that there were two babies, so I have no way of proving that. It's sad that so little attention was paid to stillbirths in those days, the births and deaths didn't even have to be registered. My greatgrandfather died leaving a young family. Two of the boys took jobs in the Post Office as messenger boys at the age of 14. When they were transferred to Auckland, the whole family moved up there.

I went back to look around and take photos. The cemetery is rundown, but efforts are being made to tidy it up. There is rosemary on some of the graves, which is covered with blue flowers just now. Greatgrandmother Georgina is buried in Auckland, and has a gravestone, as her boys were grown by then and able to pay. But the Christchurch graves have no markers. The two back to back plots are the grassy stretch in the photo with no concrete edging. There is a part of me that feels it would be good to put a plaque on the graves - and another part that thinks it would be a waste of money. 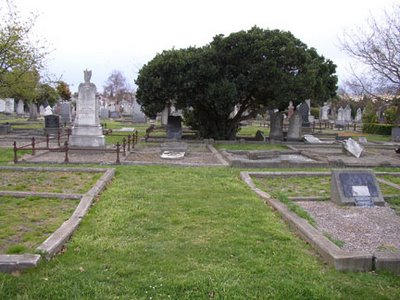 The other photos are just because I love old cemeteries (and to show the rosemary). 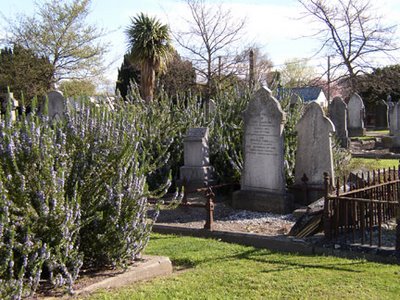 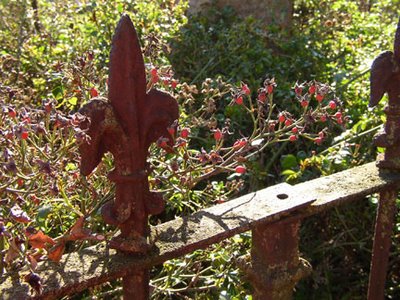 This angel with a broken wing reminded me of the quote: "We are each of us angels with only one wing, and we can only fly by embracing each other". (Luciano de Crescenzo) 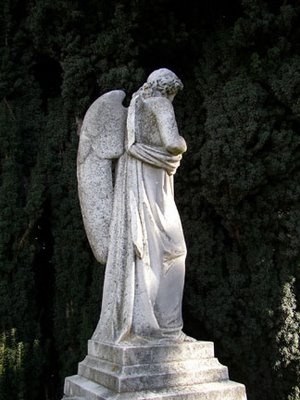 Posted by Catherine at 7:39 pm

I love old cemeteries too, Catherine, and I hate to see them poorly maintained. That rosemary is huge, so it must like where it sits. The angel quote is wonderful. If I had heard it before, it had been forgotten, so thanks for reminding me.

I have always loved old cemetaries, too...And this one has so much history connected to your family---how wonderful! I think I would be torn about some kind of markers, too...It's a way of honoring those long gone, but very costly too, and THAT is a dilemma.

I love that quotation about Angels...Beautiful!

what a beautiful old cemetary.

I love cemeteries, too, and feel a certain sense of peace as I view your images and read your description of the scene.

You've reminded me that it's time for me to take another stroll through the local graveyard.

Loved the photos...I have walked in old cemetarys and read many a tomb stone....some of the old and some of the young but always wondering what their lives were like and how they died or thoughts of their loved ones. My father has been doing family tree research for years so we have also had the thrill of sorts of finding family members in out of the way cemetaries in small towns here and there.
Here from Michele's today...great post.