I haven't travelled much, so I don't have much to compare New Zealand to, but I keep coming across people who claim that New Zealand has the most fantastic scenery in the world. And that the people are friendly and the climate is good, and things like that.

Now I have to admit that I like New Zealand, for the above reasons, but for so much more besides. Like the fact that the cities are small enough to be friendly but big enough to have culture (and you don't have to book tickets six months ahead if you want to see a show or something).

Still, I think there are other good things about New Zealand that are a little less obvious. For instance:

1) Time starts here. We get to be the first in the world to wish people a Happy New Year. We'd be the first in the world to post for Poetry Thursday, too, if the rest of the world didn't cheat by posting on Wednesday (no hard feelings). Now, given that the British have Greenwich Mean Time, you'd think they'd standardize things so that they came first. But they didn't. They let us come first instead (Isn't that sporting of the Brits?). There are other advantages to this, of course. When we travel we can leave home one day and get there the day before. Just think, if I leave on holiday next year the day after my birthday, I could have two birthdays. That's got to be a good thing. 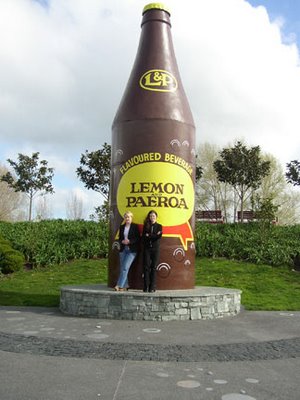 (The girls aren't part of the statue, though, they are two of my daughters).

Besides the big L & P bottle, we have a giant salmon, and a big carrot, and a big kiwifruit. There are probably lots of others. Again, I'm not claiming this is unique. Apparently Queensland (Australia) has a giant pineapple. Still, we have a lot of them, and I like them.

4) No snakes. Except for this sort: 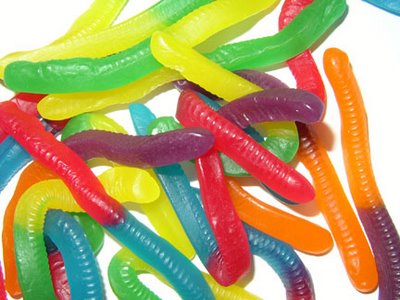 And only one poisonous spider, which is pretty shy, so you're very unlikely to get bitten by one.

5) The police don't, as a rule, carry guns. Although there is an Armed Offenders Squad that gets called out if the occasion warrants it. Guns in New Zealand are for rabbits. And deer. (Yes, I know some of you like cute furry animals, but these wreak havoc on the environment, not being native, so I'm symapthetic to the shooters).

8) Giant wetas. They look fearsome but actually they are quite docile (like us)

9) The Prime Minister visits the business in the next building and we go about work as usual. (On the other hand, when Bill Clinton visited, there were about a gazillion security guards on every corner and traffic had to stop to let his motorcade through).

10) We have a very special relationship with the letter "Z". Apparently New Zealanders can spot a letter Z in a page of text faster than anyone else. (We call it "zed", by the way, at least those of us old enough not to have been brought up on "Sesame Street" do). As a quilter, I am doubly blessed, because I can also spot the letter "q" almost as quickly.

There are lots more things, but ten seems a pretty good number so that's where I'm going to stop.
Posted by Catherine at 6:23 pm

Catherine, thank you for this post! =) It is great to hear some of these things from "an insider". And also, thanks for the feedback on the observations I've made in the past nine days... The more days pass, the more I like what I am learning. The only thing that terrifies me is the driving. (I'm off to go car shopping tomorrow - that should be interesting, since I am not sure I want to test drive anything!)

I will be sure to try some Hokey Pokey ice cream this weekend. I already tried the Feijoa flavored kind. Yum.

this is a great list! I'll be visiting New Zealand when i finally make it over to Aus to see my family... hopefully next year (and it's true - we Brits are very sporting :-) x

re: #2 - Are you going to tell the rest of us what's in Hokey Pokey ice cream?

re: #7 - I have a little Buzzy Bee ornament hanging in my kitchen window and I have a pair of Buzzy Bee socks. Because the name "Deborah" means "bee", my friend Morven thought I needed some Buzzy Bee stuff. :-)

Susannah, if you get to Christchurch when you come to New Zealand, do let me know, I'd love to show you around.
Deb, what's in hokey pokey ice cream? Why, hokey pokey of course! (according to google it is known elsewhere as "sponge toffee")