Yayy!! I'm Michele's site of the day! (Or at least, I think I still am - pesky time zones). A big welcome to all new visitors.

Now that we are back from holiday I am busy planning the next one. Our planned trip to England and Scotland is a year away, but we plan to use time share for at least one week of our big trip, and it's necessary to book early - up to ten months ahead. So I am working on our itinerary, to be sure to get a booking in the area we want.

I went to the library yesterday to borrow the "Rough Guide to Scotland". I found all sorts of interesting books jostling together on the 941.1 SCO shelves and nearby. Besides the Rough Guide, I came home with Bill Bryson's "Notes from a Small Island" and Scottish poet Kathleen Jamie's lovely book "Findings". So I now have three very different perspectives of Scotland to ponder over.

Fortunately most of my Scottish ancestors seem to have lived in the most interesting parts of the country - so I can see where they lived and visit top tourist attractions in one visit.

In Edinburgh my greatgrandmother Georgina was born. She was the daughter of a highland-born domestic servant and a British militia soldier, otherwise a carpenter. His wife Ann found after their marriage that he had given a false name. I don't think she ever knew he was a bigamist! After leaving Scotland they spent ten years in Leeds, avoiding his first wife in Surrey, and then came to New Zealand. Amos and Ann were the grandparents of New Zealand's first woman cabinet minister, Mabel Howard (my grandfather's cousin).

Near Stirling my ancestor Elizabeth died in 1674 leaving "three fir kists" and "ane oak standing bed". Also in Stirling, in 1880 my greatgrandmother Jessie hid the family silver down the well to save it from the bailiffs, before the family made a hasty and secret departure for New Zealand.

In Dundee my grandmother Edith was born, and saw Halley's comet in 1910. She told me that her brothers convinced her that when the earth went through the planet's tail "we would all be burnt up". Brothers haven't changed much! She came to New Zealand in 1912, and died here at the end of last year, a month before her 104th birthday. This is her photo. 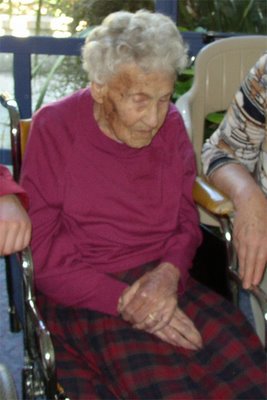 It is her legacy that is making this trip possible. In a strange coincidence, Dundee is the resting place of Captain Robert Scott's ship RSS Discovery. This is the ship that Georgina's children, including my grandfather John, visited in Lyttelton harbour in New Zealand before it left for the Antarctic. John's father had been in the Royal Navy and knew some of the crew of Scott's ship.

Breathes there the man, with soul so dead,
Who never to himself hath said,
This is my own, my native land!

I have been learning the stories of my ancestors for the last few years. I truly feel as if I have two native lands - the one I was born in, where my parents were born, and two of my grandparents, and the one I have never seen, but which formed so much of my parents' and grandparents' characters and experience. I can't wait to see it!
Posted by Catherine at 8:25 am

No doubt that will be an amazing trip! Having time to research and plan it will make it go more smoothly, too. How wonderful to learn all these fascinating things about your ancestors - and actually see some of the sites where they lived and loved. And hooray for you for being Michele's site of the day! (Is it any surprise? No!) :)

Thst's great that you know so much aboutt your family and ancestors. Michele sent me.

Here via Michele's - congrats on being site of the day. Writing from US and to open up and see it as the Sept 1 kind of threw me for a loop! Thought I had lost a day!

Congrats on being Site of the Day. Gosh, don't ya hope you have your grandmother's genes? Lots of longevity there. I'm sure you'll love Scotland. Enjoy the planning.

Hi: Michelle sent me! Do you have cupcakes in New Zealand? My blog is about cupcakes! I love the photo of your grandmother.

How interesting is this? I wish I knew anything about my ancestors. I barely know things about my father. Everyone here keeps secrets.

I hope your travels are enlightening.

Oh Catherine, I had chills reading this! How precious and wonderful that you can know all that about where you come from, and to be able to go and visit.... Your grandmother looks absolutely darling. To get to almost 104 she had to have been doing something right! ;-)

Thank you for sharing this today!