Rabbits, Pincushions and the Daily Poem

Yesterday I left work early for the first time in weeks. My desk was clear. I could have found some work to do but chose not to. This is my main job where I'm paid for a fixed number of hours. It is assumed that if I work a few less hours when it is less busy, I'll work more when it is busier. (In my other job, I'm only paid for the hours I do, so less hours means less money).

I had magazines to deliver to bookshops in town (that's my third job which is totally unpaid). I used this as an excuse to browse in the bookshops. I went first to the shop near the river: 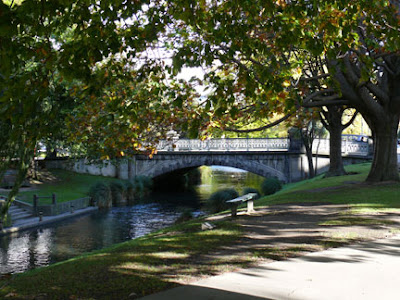 It won't be long before these trees have completely changed to their autumn colours.

Then I strolled down to the art gallery: 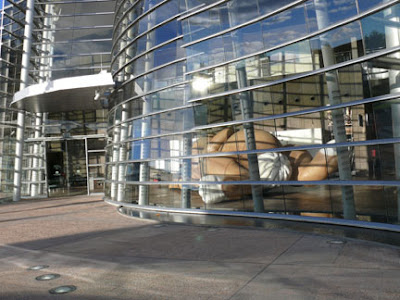 Yes, that is a giant inflatable rabbit in the foyer. Part of one of the current exhibitions. They have a very nice shop at the art gallery. It has books, cards, stationery, children's games etc mostly with an art connection. But it does have some rather odd things as well. What I noticed on this occasion was a St Sebastian pincushion. I guess with a giant inflatable rabbit in the foyer, it's a good idea to have something for people who like to stick pins in things!

There was a cold wind blowing outside, so I didn't linger too long. But I did stop to take photos of the ripples in the shallow pools surrounding the building. It was fairly late in the afternoon so the shutter speed was a little long, and the images aren't as sharp as I would like. But I thought the reflections made an interesting pattern. 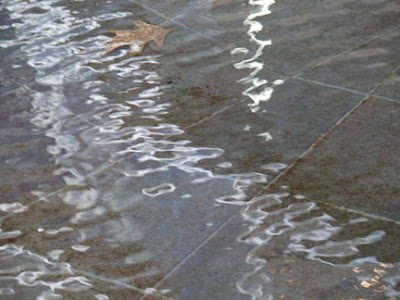 I haven't used the daily prompt for NaPoWriMo today (it was "bluff"). Nothing came to mind, so instead I played with an idea I had a while back, when Poetry Thursday had a food theme:

She brings him apples.
She bites one, shows him how crisp it is,
how neat. He is not tempted.

She brings him bananas.
She peels one, bites into its soft flesh,
shows him how easy it is.
He is not tempted.

She brings him peaches.
She shows him the blush of its skin,
its juicy flesh. He sees its hairiness,
and finds it distasteful.

She brings him pears, broad-hipped,
lightly freckled, glowing golden
in the afternoon sun. He takes one,
bites into it, lets the juice dribble down his chin.
Leaving Eden, he has no regrets.

pears are the best. now I understand that story so much more clearly

Thanks for the virtual walk around town. Seriously, I LOVE this idea and must do something similar in my neck of the woods.

LOVED your poem!! Very nice! It seems "poetic" on so many levels. *grin*

Michele says hello. I say have a great weekend! *wave*

The reflections do make an interesting pattern :) I've enjoyed the tour! I hope you're enjoying the weekend. Take care :)

What I heard was that Adam woke up and spied a beautiful new creature. He hurried over and began talking with her. After a few minutes he turned and ran to his place and yelled, "Lord, Lord?"
"Yes"
"What's a headache?"

That top photo is one I would like to walk into. Rivers have always fascinated me.

I like your Adam and Eve poem very much! I love pears too, Catherine. Michele sent me.

Here from Michele, my dear...
LOVE that poem...!
And the pictures are wonderful, too...Beautiful flowing river...(?) I am assuming it's a river...and such a pretty bridge. I like that last one that you said doesn't seem sharp enough...well, you can't tell by me(lol)...

Love the rewrite of Adam. :)