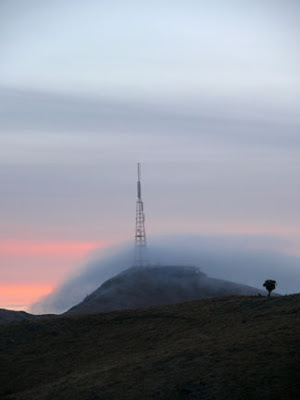 "Don't mess with the muse"! - Feeling edgy yesterday, I headed off for a walk up the hill. As I walked, I calmed down and found myself composing in my head about half of the poem I had been trying to write based on the first daily prompt at Poetry Thursday - "absolve". As I joined in on these prompts a bit late, I had missed this one out earlier.

When I got back home I found dinner was nearly ready. I had gone over the lines so many times that I thought I would remember them, but of course when I came to put them down on paper later in the evening, I didn't remember them so well after all. I think I have just about recreated what I came up with. But it is a reminder to me, that the poetry muse demands that her ideas be paid attention - they should be noted down straight away.

"Absolve" to me is quite a formal word. I fell in love with the sound, and wanted to work in all of its rhymes. I didn't, quite, but I used a fair few of them. Of course formal rhyming poetry is really hard to do well, but I wanted to try. Trying to use the word at the end of a line, without changing it to "absolution", made it even harder. Despite the religious use of the word "absolution", I see "absolve" as being different to "forgive". "Absolve" to me means a declaration that there was no fault in the first place. Forgiveness is an acknowledgment of a fault before a release from the longterm effects of that fault.

(I really should come up with better titles than the word which is the prompt. But a poem a day is hard enough without worrying about titles).

Absolve
Low tide. Mudflats pockmarked by breathing holes
of hidden clams. A heron stalks. The slow revolve
of leaf fall, joining others to turn to silt
where tree trunks join reflected trees. They shatter and dissolve
as the wading heron lifts in flight, pissing as it goes.
This mud and shit is necessary beauty
- part of life - it's how all things evolve.
Whatever I have done, or failed to do
that lies between us unresolved
is as it is. I will not whine "it's not my fault",
may ask you to forgive me, but never to absolve.

(The photo is of the "Sugarloaf" - taken on my walk yesterday. Low cloud wreathes around the television transmitter tower while sunset streaks across the sky in the background).
Posted by Catherine at 4:13 pm

I love the line "This mud and shit is necessary beauty." And your decsriptions of the the mudflats are very rich.

I wouldn't worry about titles so much at this point. But I'd love to see where you take it.

"Whatever I have done, or failed to do that lies between us unresolved is as it is" I love this line, the imagery along with the photo is beautiful.
BTW, I used your poetry line in a poem today.

I liked this one, too -- although the lack of transition between the first seven lines and the last four is tough for the more literal side of me. LOL If you could somehow hook the "low tide" aspect a tiny bit more directly to the end of the poem that would be wonderful.

But I agree that "Whatever I have done, or failed to do that lies between us unresolved
is as it is . . . ." is really good.

Beautiful creation, you definitely managed to keep the whine out throughout.

I used your line as well.