A Walk to the Square 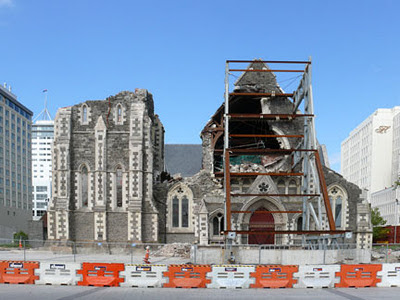 For a few weekends, a walkway has been opened from the newly reopened Cashel Mall into Cathedral Square. So, despite a very busy weekend, I squeezed in a bit of time last weekend to get down there and have a look. I wasn't sure if I'd get to see it as there were only 300 people permitted each hour (now increased to 400). However, I thought that if I went down after my poetry workshop which ended at 4 pm, with a quick stop to vote on the way (yes! general election day), I could at least look at the Ballantynes Christmas windows, size up the crowds and see if I could make the walk or not.

As it turned out there was plenty of room. Probably because for the last few weeks there have been bus tours of the red zone in the weekends and evenings. I hadn't been on any of the bus tours as it required phoning to book - but only between the hours of eight and five "and please don't phone between 8 and 9.30 a.m. or at lunchtime when the phone lines are most overloaded." Well hello! some of us are at work during those times. And I'm not in a job where I can tie up the phone for ages will I sit in a "hold" queue.

Actually, I thought the walk option was a better option - it didn't take us as far, but viewing on foot sounded better to me than peering through the windows of a bus. And the city is not that big, you can see much of it from outside the fence just by looking down the empty streets. Cathedral Square was the bit I most wanted to see.

So, I duly read the warnings, went prepared (take a fully charged cell phone, wear sturdy shoes, tell someone where you are going, carry ID on your body not in a bag, and yes you might die - obviously someone was covering their butt when they drew up that list, and I had no expectation of dying, no more than anyone had on February 22nd). I thought that we would be checked as we entered but apart from someone standing there with a clicker to keep count, there was no actual check of cell phones, ID etc.

I took quite a few photos:
That's the Anglican Cathedral at the beginning of this post. It's hard to see how it can be rescued given the state that it is now in. 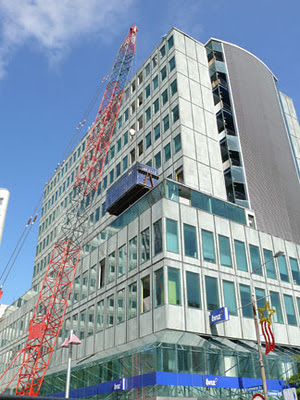 The Bank of New Zealand building is being prepared for demolition. Upper levels are being emptied out by crane using shipping containers. 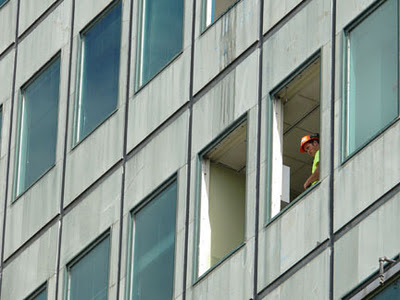 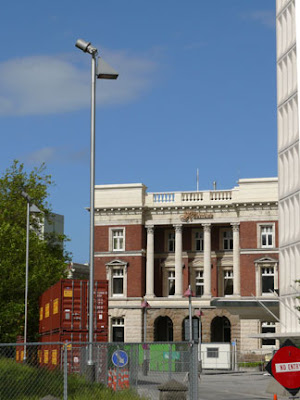 The Heritage Hotel appears to be OK still. This is the old part, on the right hand side is a glimpse of the much taller new wing. 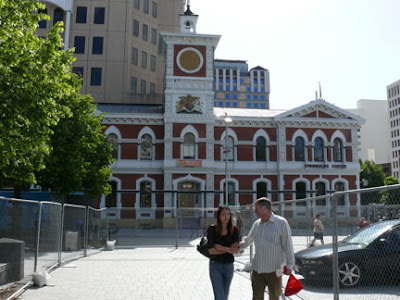 Also surviving so far is the old Chief Post Office, now housing and information centre and Starbucks (both of course currently closed).
Not surviving are the historic Press newspaper building, and the Regent Theatre with its beautiful dome, both now completely demolished. 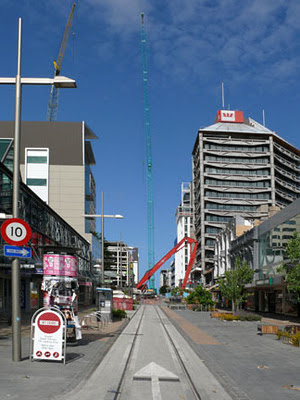 Down a blocked-off and deserted street is the Westpac tower, also I believe due for demolition. The problem with many of these modern buildings is that the soil underneath proved unstable due to the many old creeks and streams in the area, so the foundations are damaged. This makes repairs very difficult.

And back at the mall, the Christmas displays were delighting small children. As part of these, a story-teller reads traditional stories from a large book (papier mache I presume) 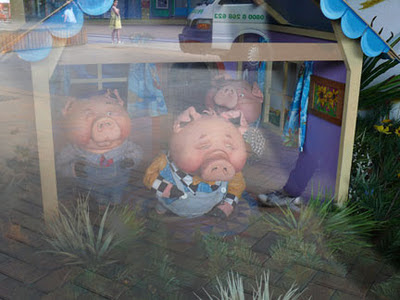 (Not a very good picture, I found it hard to eliminate reflections).
As I arrived, the tape had just got to the part of the "Three Little Pigs" where the third little pig is safe and snug in his brick house. And all I could think was "what the...? what were they thinking? Is there any small child in Christchurch who actually thinks you can be safe in a house of bricks?"

They are some very strange 'real' pictures.

It's difficult and sad to imagine the whole of a busy city centre fenced off like that and being systematically deconstructed.

I've read your previous posts about the zones and container shops.

It's good to see the positive spirit leading towards regeneration, but I guess this is going to be a very long story.

...And a return visit after I saw your article about the container shops, constructed from necessity.

It seems that in London we have them as well, but as 'pop-up' shops for the Christmas season, dropped into an area in Shoreditch. They've been commandeered by trendy clothing retailers and similar.