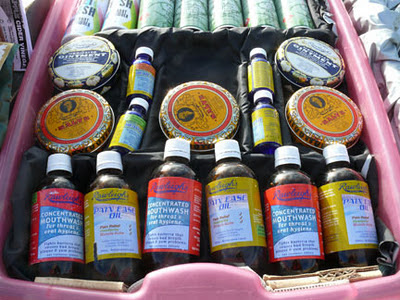 Don't knock the Rawleigh's Man
when he opens his case and offers you
mixed spices, curry powder, chilblain
ointment, Ready Relief, brilliantine,
don't say Not now, don't think
Piss off, but remember:
think of a hill called Tibi Dabo
behind Barcelona and the legend
that up there Satan
showed J.C. just what he was missing.
What he offered was not simply
the vulgar things - the girls
with buttocks like mounded cream
or enough money in brewery shares
to take a Rotarian's mind off mowing lawns
for octogenarian widows,
or the sort of drink we all know
Vice-Chancellors drink when they drink
with other Vice-Chancellors -
not that but more deftly
the luciferic fingers fondled
buttons nostalgic with little anchors
as in the Mansfield story
and bits of coloured glass from old houses
and variously, these; good punctuation,
unattainable notes, throaty grunts
at bedtime, the nape of the neck
of lovely ladies caught in lamplight
like the perfect compliance of the pitch
in the last over when the last ball
takes the intransigent wicket -
yes, he did. Satan offered those things,
those were the things turned down,
that's how serious it was.
And what was round the corner as we know
was a tree already chopped
waiting to be a cross and a woman
at home rinsing a cloth white as she could
and Joseph of Arimathea still thinking the rock
he had hollowed at phenomenal expense
was going to be his, forever,
not Some Body Else's, for a spell...
So when the bag snaps on your doorstep,
flies open like leather wings
and you see instead of feathers
the tucked-in jars, the notched tubes,
the salves the spices
the lovely stuff of the flesh,
ask him in, go on, in for a moment.
There's no telling what else he might show you -
what mountain he has in mind
you may cast yourself from,
what price that your hair shimmer
like a diving hawk.

I came across this poem in one of Vincent O'Sullivan's early collections, and loved it immediately. Unfortunately I can't locate which collection it appears in, as our Central Library collections are still largely inaccessible and the branches seem to have mostly more recent volumes. It does also appear in "100 New Zealand Poems" edited by Bill Manhire and published by Godwit Press.

I heard Vincent read it some years back, and he commented that as a small boy, he had wanted to be a Rawleigh's Man when he grew up. The reasons are clear in the poem - the sense of magic when the travelling salesman opens the case and shows his wares. I remember the Rawleighs Man visiting my grandmother. At the time I viewed the products as rather old-fashioned. My grandmother's purchases were the salves and ointments. Even then I must have been a budding scientist, and thought that they were largely snake oil, and of course anyone with any sense would only trust medicines that came on a doctor's recommendation or at least a pharmacist! Later though, I discovered Rawleigh's essences and became quite a fan of their strawberry essence, their orange essence and in particular, butter rum essence which is quite deliciously decadent. The Rawleigh's Man no longer goes door to door as presumably he would find few people home. But the products are still available as the above photo (taken at a Saturday market) shows - and they don't seem to have changed much.

I do love in this poem how it is the small things that Satan offers and that are the most important in life. O'Sullivan's particular small things might not be my choices - the last ball that takes the intransigent wicket, etc, but the principle still applies - and the last two lines, the hair shimmering like a diving hawk (no doubt by the appropriate use of the Rawleigh's Man's products) seems to round it all off perfectly.

It's an intriguing poem, Catherine with a lot "in it"--like the Rawleigh man's case--and "to it" as well as enough wry human to serve as leaven.