Just when I thought things were settling down, we had another significant aftershock a few minutes ago. My daughter has just reported from Twitter a 6.2 magnitude preliminary estimate. Must be a bit further from us this time as we still have power and internet, I am waiting for the details to show up on geonet.

At least I have all my Christmas shopping done. Sigh...

Update:
Now being reported as 5.8 and centred about 10km off the coast, so a bit further away than the February and June quakes. Shops have been evacuated, phone lines are down in some areas. It's not quite the Christmas present we were looking for.

And here's the seismograph drum for the last half hour or so: 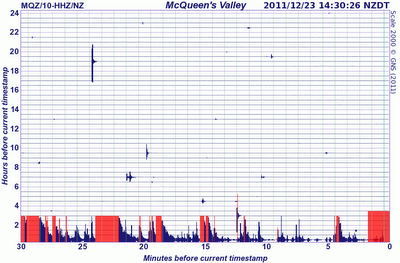 Posted by Catherine at 2:11 pm

I was travelling in the car and heard this news Catherine. It is unbelievable that you face it all over again. Kia kaha.. al over again. Our thoughts and love is with you..

I was just thinking about you.

Got a text from one of my brothers letting me know he was safe, but Christchurch was shaking again!

Hope you are doing okay.
x

thought of you and Christchurch this morning when it came up on radio 4. glad to know that you are safe but sad that this should happen at such a time of year. I hope there is not too much devastation.
Wishing you a Happy and safe Christmas

Thinking of you all Catherine. HOpe you manage a good Christmas and New Year in spite of everything!

Catherine, all the best for 2012 and may you all have a quake free year.