Goodbye to an Old Friend 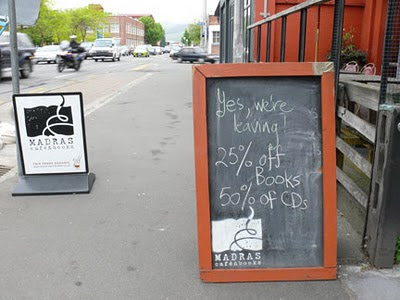 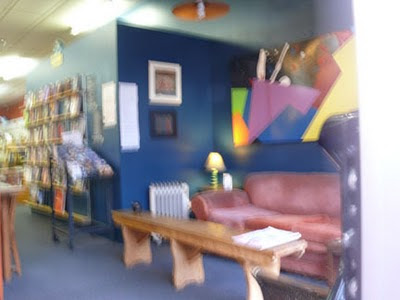 On the way to work yesterday I made a quick dash into the Madras Cafe Bookshop to take advantage of its closing down sale. (And also because I had an unused gift voucher that I wanted to use before they closed the doors). I don't think the closure is directly earthquake related, but the landlord has raised the rent above what they can afford - and the shortage of affordable premises for small, niche businesses is certainly not helped by the effects of the quake.

We need to value our small independent bookstores. Big chains may have their place, but it is the smaller stores that I head to when I want to find books beyond just those being promoted heavily by the big chains (and more and more, the big chains stock cookbooks, gardening books and celebrity biographies). I head to independent bookstores when I want good service, and perhaps a title ordered in specially. It is the small bookstores who are willing to stock books by local poets who are doing their own distribution - you can walk in off the street and say "will you stock my book"?

As for MCB as it is known locally, it has been host to many, many poetry readings, book launches and similar events over the years. It will be missed.

(After I took the second shot, I realised that the low light had led to a very long, blurry exposure. I thought of trying again, but I've seen so many Holga and Lomo photos on blogs in the last couple of years, that I'm beginning to get used to photos that once I would have thought technically imperfect. I decided I rather liked the effect).
Posted by Catherine at 7:12 pm

even blurry it looks like an inviting place, sorry it has to close

I love small independent bookshops Didn't know of the existance of this one. How sad to see it go

Oh I would be sad to see an old friend going. It sounds like a perfect booky place. Books and coffee..perfect!