There are "must sees" when going on holiday, like the Eiffel Tower in Paris, or the Sydney Harbour bridge and Opera House. But what I find delights me more are the surprises - things that I never knew I would find, but just happen on unexpectedly, either in the form of advertising material when we get there, or just stumbling across it.

One of these delights was Wingham Brush. It's a small area of nature reserve in the town of Wingham, New South Wales - but what is remarkable about it is that it is home to a colony of around 100,000 grey headed flying foxes (bats). We started along the boardwalks and as we ventured further in, became aware of a quiet chittering, which became louder and louder, and suddenly spotted huge numbers of these fascinating creatures hanging in the branches overhead. 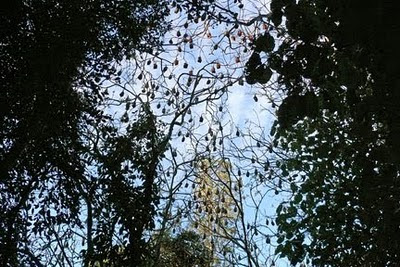 Some peope are afraid of bats, but I think they are adorable! 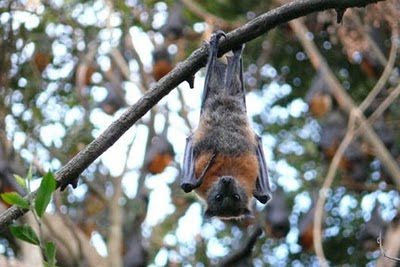 They were all folded up when we arrived, and gradually as dusk approached, showed their faces and became more active. As it became dark and we left the cover of the trees, great crowds of them took to the air out over the river in search of food.

For this week's theme at Thematic Photographic: branched
Posted by Catherine at 10:44 pm

Wow! I'm happy when I have 1 or 2 doing circuits of the garden at dusk. That must have been an incredible sight.

that is amazing...i know we have bats but have never seen them . great pictures

Awesome photos, and you truly captured an adorable bat shot! even bat haters should agree he/she is cute! amazing how you caught him/her just hanging around!

Amazing photos. I was amazed to see bats flying in Hyde Park in Sydney. We never saw them up close though.

what a wonderful photo of the bat!

I was lucky enough to work in an office in a beautifully restored old mansion. We had lots of bats, some of whom would occasionally fly through the office space. I became an expert at gently catching them and releasing them on the trees outside - never on the ground, as they'd die there.

I knew they'd eventually find their way back in, but it was a wonderful little game we played, and I enjoyed it.

These are delightful! I'm glad you're not afraid...wish more folks "got" bats. They're not so scary, after all.

New theme, "turning colder", is up. I know the seasons are reversed, but I'm willing to bet you can divine something memorable!