Although the prompt at readwritepoem was to listen up, and write a poem about sounds, I started with an image. A few months ago I put a collection of photos from our UK trip into a folder to use as my desktop images. They change every 30 minutes and by having them in front of me so often, they are engraving themselves on my mind far more than when I just had some printed and stored in an album.

One of them was my prompt for yesterday's poem, and another sparked the idea for today's. This is Inchamahome Priory on an island on the Lake of Menteith in Scotland. The young Mary Queen of Scots was taken here for a few weeks as a four year old, for her safety. It is now largely in ruins, and is a very peaceful, beautiful place. 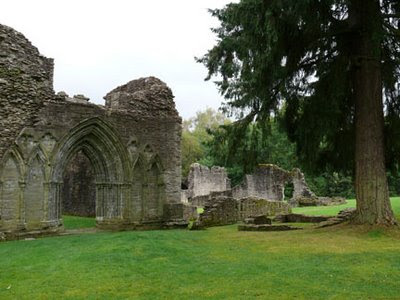 The reference to the fair folk comes from here.

the chatter of day trippers
and the clicking of cameras

soft chug of a motor
a boat appears to take us home
Posted by Catherine at 10:17 pm

i esp like the last two lines. i passed by there just this afternoon and could've done with the boat across the water!

i am in scotland. i was by the lake of menteith on my way to train for a bike race in aberfoyle. a beautiful day to be in the trossachs!