The days are beginning to get a little longer, but not long enough yet for there to be much daylight before and after work. This has its compensations - the light is actually more interesting in the early morning and close to sunset.

Here are the last three days' worth of photos: 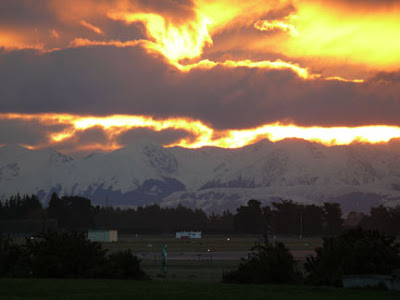 The mountains are not as close as they look, as I zoomed the camera quite a bit. The Canterbury Plains are the largest area of flattish land in New Zealand, which is not saying a lot by world standards. The Southern Alps are about 100 kilometres away across the plains. That's the runway of Christchurch Airport in the foreground - I work very near here two and a half days a week. 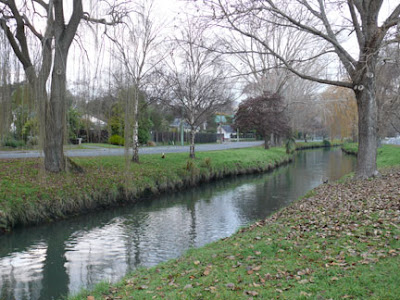 On Tuesday morning I captured this peaceful river scene near my home on the way to work. 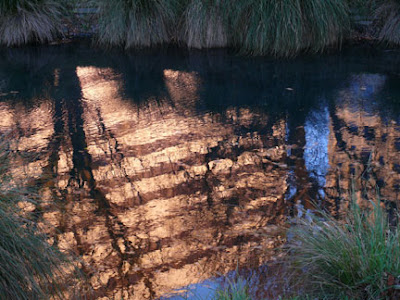 On my way home today I stopped in the city. The late afternoon sun was lighting up these two buildings, which were reflected in the river (there are two main rivers in Christchurch, this is the Avon and the one near my home is the Heathcote).
Posted by Catherine at 10:28 pm

The sky in your first photo is amazing ~ looks like a painting.

The first photo is so very good - you could enter it into a comp. I reckon - it shows Canterbury at its very best. And the other two are so Christchurchian too! You are a great ambassador for the place ... I believe you live near (from the photos) where my sister in law's brother lives - if you can sort that out. I have stayed at their place and the Heathcote runs (trickles) along the bottom of their section.

I absolutely LOVE these photos, they are all very good, but the sunset... that is just stunning.

What a beautiful world we live in.

Thanks for sharing it.