Today my mood lifted considerably after I spent a few hours wandering around a pine forest. There's nothing like exercise and fresh air to lift the spirits. I just have to remember to deal with some of the underlying issues which are still there, even though I feel cheerier.

It was a beautiful frosty morning. As I drove through the countryside there were some very picturesque scenes, however I didn't ahve time to stop and take photos as I had chosen bed over leaving early, and unfortunately the best views were from the motorway where there was no stopping.

This is the forest I was walking around in: 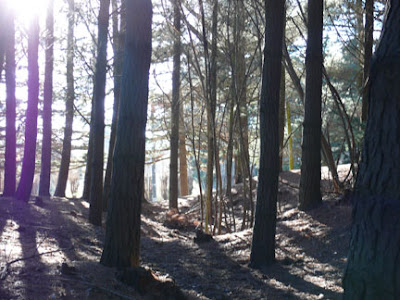 and the closeup of blackberry leaves shows the frost: 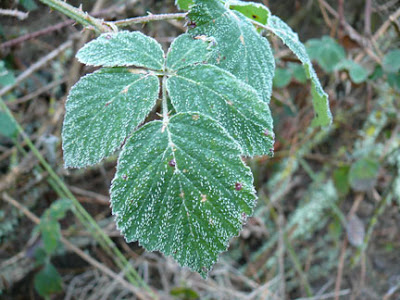 This was the reason I was walking around the forest: 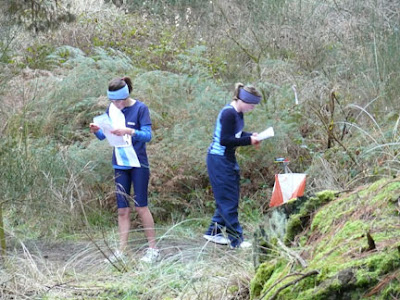 The girls were participating in the New Zealand Secondary School Orienteering Championships. My job was to patrol part of the course and make sure that random passers by didn't steal or damage the expensive electronic control boxes (the blue part on top of the stake by the orange flag). Unfortunately, the day before, idiots had taken eight of these along a pathway - they are of no use to anyone else, it just spoils the fun. Today though, there were no problems. And a good time was had by all.
Posted by Catherine at 7:09 pm

I should've got out today too. Alas, all I did was help AMB tote and stack a load of firewood we had delivered.
I love the blackberry leaf with frost on it.

Michele sent me way, way over to see you, Catherine. It's been so hot here that seeing that frost on the blackberry leaves is like a glimpse of heaven.

I haven't done any orienteering in something like 20 years. Certainly a good skill to have if you're going to be spending any time in wilderness areas.

Catherine, thanks for dropping by via Michele!
We're near Kirkintilloch - on the Stirling side of Glasgow. When I started blogging, I was a bit paranoid about being open about who and where I was! I was worried about weird and scary comments and stalkers but have had none of that, so far!

Happy Bastille Day - ours is just beginning as I write and you have had fun orienteering already. Time differences are confusing, aren't they?!

Time in nature can be so restorative and spending it with your girls could only add to the pleasure.

The trees and frosty leaves are beautiful!

If I was out and about in a gorgeous setting like that, my mood would be lifted too.

How sad that idiots steal things for which they have no obvious need. The human ability to screw things up for everyone else remains strong.

Glad things went well on your watch. You captured the scene beautifully, and I'm glad you're feeling better.

Michele is glad, too!

Beautiful scenery - I love the picture of the woddland!
rashbre

er woodland that should say :)

Hi Catherine...Michele sent me to you this early evening here in Los Angeles!
It is hard to think about "frost" when it is in the high 80's here...but I realize it is winter time there...
Glad your spirits are lifted a bit!

Michele would have sent me if you'd been 10 seconds faster posting your comments! As it is, I thought that I'd visit down the line as well as up:-)

Hope you're not feeling grumpy today, or at least a little less grumpy:-)
N.