Which just goes to show that England has always been a rainy place, and maybe the current extreme weather there isn't about global warming at all.

Interestingly, I've heard nothing about floods in Scotland. Is it dry up there, or is it always so drizzly and misty in Scotland that they haven't noticed any difference?

Whichever it is, I'm hoping that September will be fine, so we can see some of the landscape we are going to visit. And take photos. My digital camera doesn't like rain that much. P. was commenting that the camera he covets is on special at about $700 below its RRP. It's an SLR and is sealed so that it's weatherproof - perfect for taking photos in a wet English summer. And in fact, he had planned to buy one before we went, but now he has no job, so it is off the purchase list for the foreseeable future. Maybe I should just buy an umbrella, and one of us can hold it over the other during photo taking endeavours.

As it happened, the rain stopped here by lunchtime. So I was able to make a photo stop on my way between jobs at lunchtime, so that I'd have a daily photo to post here. I parked my car near the Antigua Boatsheds, a scenic spot much loved by calendar photographers. If you want to see such views, click the link. In winter it is another matter, of course. I thought there might still be a few tourists out paddling canoes, but there was nothing. And no brightly coloured canoes sitting on the deck in rows waiting for customers. So I photographed water running over the weir, and ducks on the bare wooden deck, and then I strolled closer and realised that the boat sheds were indeed open for business. The doors were open, and inside I could see the stacked paddles, and in one shed, wide flat punts. On the walls were hung the jackets and hats worn by the operators of the punts, to give a traditional English look (since Christchurch likes to pretend to be an English city, which it is not, of course).

So, my selection for "photo of the day" is this shot of straw boaters hanging just inside the door, taken from the opposite door. I think those are old glass lanterns on the shelf above. 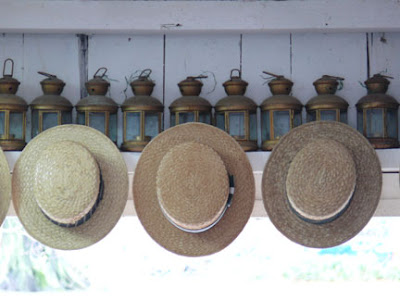 (I did take some sky photos on the way home, too. But there's a limit to how many sky photos I want to post).
Posted by Catherine at 8:18 pm

I love your photo today. Although you are in winter now, this says summer to me.

It *is* a summery photo. I think the umbrella sounds like a good idea.

I apologize for the spamlike comment, but I’m soliciting submissions for the Ringing of the Bards poetry blog carnival, August 11th.
If you are interested, you can find more details at my blog.

All poems are welcome, but I'm highlighting religious and spiritual poetry this month.

Whether you submit or not, please come by and visit the carnival!