Not as Cold as it Could Be

The forecast snow failed to eventuate. Though I think Chiefbiscuit has had some in her part of the country. The lack of snow doesn't mean warmth. I woke this morning to a bright sunny day, which means a hard frost. The water in this birdbath was still well frozen over at noon: 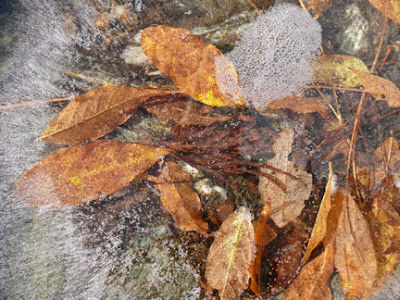 The sun doesn't reach the backyard in winter. There wasn't just frost, but a series of little waterdrops on the grass had frozen solid, like hailstones 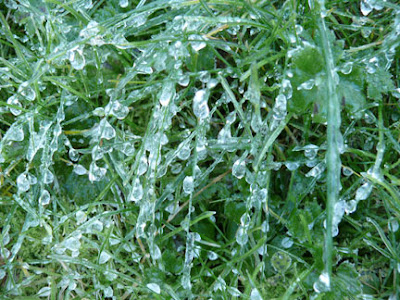 and on this fern: 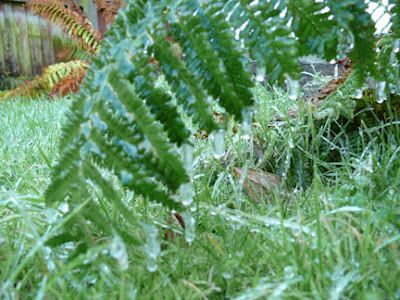 I am feeling lucky. My daughter and I went to see "Paris Je T'Aime" ( a series of "small neighbourhood romances" set in different areas of Paris) on Friday. I had free tickets which I had won by entering a giveaway on the website of the New Zealand Listener magazine. Buoyed up by my luck, I then went to the website of the Montana New Zealand book awards and cast my vote for reader's choice. This puts me in a draw to win $1000 worth of book vouchers. The next job on the list is to go through haiku I have written for one deep breath, and see which (if any) can be rewritten to a 5-7-5 pattern, for the haiku competition I previously mentioned - the prize for this one is a set of all the poetry book finalists for the book awards. (Those reviewed in my previous post, plus the three that are in contention for the best first book of poetry, which I actually preferred to the three in the main competition).
Posted by Catherine at 3:15 pm

Hi Catherine. Popped by from Michele to let you know that I'd gladly send you some warmth if I could: it's going to be 34C here tomorrow...I want some cold in return!

Love these pics! They speak of cold!

Liked the pictures and more so after your descriptions. Here is hot and humid as hell!


here's hoping for some more sun for you ;)

An if the Snow does come not too heavily I hope ;)

Hey there, don't forget to cast your vote in the lions writing circle contest. :) Only 3 days left to get your votes in at seak@caramail.com
See the circle blog for full details!

Good luck in your competitions! I'm looking forward to seeing that movie, too :-)

Good luck in your competition! your pictures are wonderfully refreshing, we would be happy with a bit of rain, nothing else...
Thanks for visiting via Michele's

Catherine, I have linked your blog to my main blog, rooted.

Thanks for your visit and kind comments.

Luscious photos. The ice is looking nice around now. We saw Paris Je T'aime too. Which was your fav? I think the segment on the muslim girl or the vampire or the bickering divorcing couple were ours.

I forgot it's winter where you are.

I'd so love to visit New Zealand for some climbing in the Southern Alps. Wonderful web-journal and photos.