My plan was to get up early this morning, go for my usual walk up the hill, then take my daughter shopping (she had a step ladder to pick up for her new house which is a bit awkward on the bus, and she doesn't drive).
When I woke, however, I found the hills were shrouded in mist. So I read the Saturday papers until she arrived. Later, when the mist had burned off, I thought about my walk. But I also wanted to go into the city centre for various reasons. So, I thought instead of driving into town, driving home, then driving to the hills for my walk, I would just walk into the city instead.

I took a great many photographs. So I decided to spread them out over a number of posts - if you care to come back later in the week, you get to walk with me all week :)

I started off in the suburbs of course, and went past this park where a game of late summer/early autumn cricket was taking place: 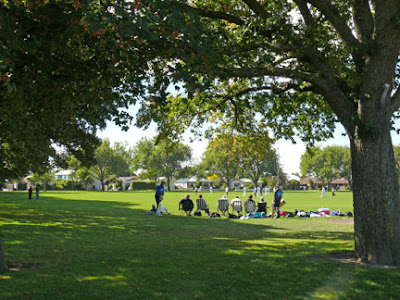 I'm not really into cricket, but I did love the crisp green and white, bathed in sunlight. 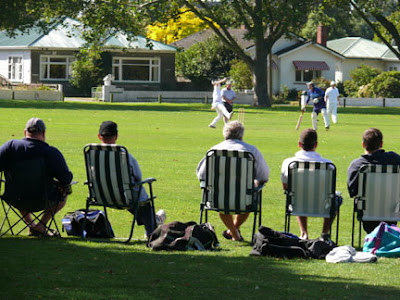 Posted by Catherine at 9:12 pm

It looks more savoury cricket than about the news we've been hearing lately regarding match-fixing and murders.

That green is even greener than we have in Somerset! Lovely! I see you have had Jean-Luc visit. Unless I am mistaken he owes me a couple of visits!

Wow.... looks like lovely weather! I'm fascinated by New Zealand, never having been there. I'll check back for more photos!

Here by way of michele.

Christchurch is beautiful! How long is your walk into town?
My mum has just moved into a place at Diamond Bay.
Michele sent me today. Can't wait to see the rest of your photos!

Your cricket match in the sun reminds me of the hours and hours my wife and I have spent on the side of similar looking playing fields watching our boys play soccer.

One is off to college and the other no longer plays soccer so it is sad in a way. But there is plenty more about their lives that hold our interest now.

What a wonderful blog you have here Catherine!

That looks like many of the parks here in Sacramento... even the campus of Sac State. Looks like a beautiful day. I posted a few pictures from my drive to Lake Tahoe today on my photo blog.

Michele sent me back,