More Poetry and a Housewarming

I am having a very poetry filled week. Yesterday after work I headed off to the Madras Cafe Bookshop for the launch of Bernadette Hall's new book "The Ponies".

The first part of the book is made up of poems based on Bernadette's experience as an Antarctic fellow. Artists to Antarctica is a wonderful scheme which each year sends around three artists to the Antarctic. They are from all disciplines: writers, musicians, painters, textile artists, furniture makers and others have all benefitted from this scheme.

The title poem of the collection, "The Ponies" can be found here.

The second section of the book is a short one - four beautiful elegies written after the death of Bernadette's niece in the London Underground bombings in 2005. And the third section is more of a mixture. Of these, The History of Europe was included in Best New Zealand Poems 2005, and several of the poems, and an interview, are online in Turbine 2006 (along with many other fine New Zealand poets).

I love book launches - there's always tasty finger food, speeches that are interesting and not too long, readings from the book (Bernadette is a great reader) and a good gathering of local writers, many of whom are friends. I used my book voucher from Wednesday night to help pay for the book. (There are all sorts of things I am doing without, to save money, but I can't do without poetry). And when I got it home I noticed the page with the list of her previous books. There, in the section "edited" was "The Chook Book" - the collection of poems produced by the small poetry group I belong to. This is typical of Bernadette's warmth and generosity. It certainly wasn't a career advancing move for her to edit our book. And to see our small, self-published collection listed along with other "important-to-national-literature" publications gave me a small thrill.

I rushed off from the book launch because my daughter was holding her housewarming party. That's another pleasure - for me to see her established enough to buy her own house, in a financial climate that makes it very difficult for young people to do so - especially young single people.

I'm taking this as an excuse to get some quilt photos onto the blog. When I saw that one of the bedrooms has lilac walls and purple curtains, I thought of this quilt: 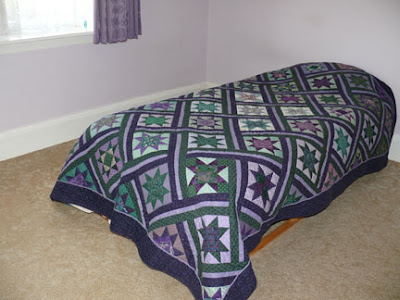 I went to fetch it when she moved in, to offer it to her as a house-warming gift, and found this quilt as well: 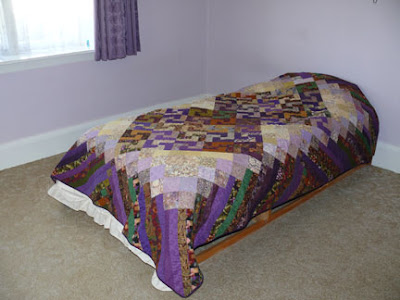 At the moment she is trying them both out to see which one she likes best. I did suggest she keep them both, but she said then she would have to decide every night, instead of just once! (Edit: I realised it wasn't clear from what I wrote, but I made both of these. I have quilts on the beds and quilts in the cupboards here. Giving them away means I can make more! We don't have money to spare at the moment to buy here a big housewarming gift, as I would like, but it's a pleasure to have something to give her from our non-cash abundance)
Posted by Catherine at 1:43 pm

You are a wonderfully caring mom. The way you wrote about your daughter and what you did for her with the quilts was priceless. I wish all parents interacted with their children as you do.

What beautiful quilts, your daughter is lucky to have them! Sounds like you had fun at the book launch too!
Thanks for stopping by my blog earlier.

Hi Catherine, Who made those beautiful quilts? I have purple and poetry on my blog too. It's wonderful that the poet gave your group mention. Michele sent me.

Who needs money for a housewarming gift with a beautiful gift from the heart like those quilts? She will sleep under her mother's heart every night. Kudos!

What beautiful quilts. My MIL makes quilts like this. She makes them for all of her kids (4) and all of her grandkids (9) every other Christmas or so.

It doesn't matter how many cool toys and gadgets the kids get, their favorite gift is always the quilt their grandma has made them.

Keep up the good work, you are very talented!

What cherished gifts for your daughter! And congrats to her for her new house! The book launch sounds like a lot of fun.

I bet the book launch was a real treat. I see Fiona Farrell (not sure how many rs and ls) is also putting out a book soon? I must look out for Bernadette's book, I love her poetry. Thanks for the links, I am going to use them now.
(The quilts are beautiful and perfect for the room.)

Those quilts are lovely! I especially like the bottom one.

Those are gorgeous quilts. Someday I'll do that.