A few years back our esteemed City Council decided to instal a sculpture to honour Queen Elizabeth II. This sculpture is placed on the pavement just outside Alice's, the video store I referred to in the previous post. What did they choose? Three bronze corgis. It was not a decision that was without controversy. I think they are quite fun, except that they do tend to get in the way of pedestrians. 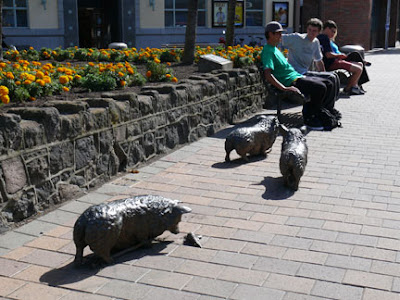 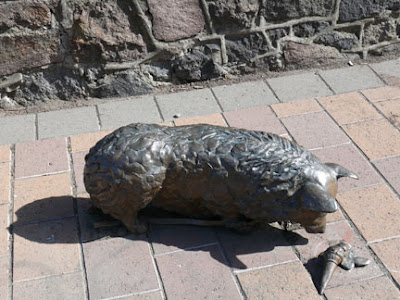 On the opposite side of the road I was intrigued by the contrast of the bright orange bin and graffitti covered concrete wall at the back of the alley, against the rather upmarket shoe shop next to it. (I'm thinking I might go back and experiment with the angle on this one). 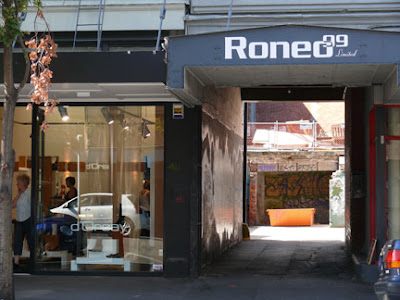 A small correction: of course, as I should have seen if I had looked at the photo, the phrase "Do what inspires you" doesn't advertise the CPIT. It is actually a slogan of NatColl which is a private tertiary institution teaching subjects such as graphic design, web design, digital imaging etc. (It's still a good slogan!)
Posted by Catherine at 5:51 pm

The corgis are brilliant.
I wonder what The Queen makes of this!

I like the sculpture!!! I am sure it was controversial as it doesn't seem to be very "official" or "royal", but it's fun!

By the way, Bruce and I are thinking we would tour NZ (both islands) in June-July... Any words of wisdom on how cold or rainy the winters get? I know last spring I felt like I was about to grow gills in Rotorua!

Aren't people always tripping over them? The Queen does like her Corgis!

I think the corgis are cute, too.
But where's the statue of their poo?

Another brilliant set of photos Catherine, proving city-scape is as fascinating & inspiring as any landscape.