At the end of yesterday's post I was heading north, on the eastern fringes of the city. I then turned off that street onto High Street. Christchurch is laid out on a north-south and east-west grid of streets, mostly, but High Street cuts across on a diagonal. So in these photos I am headed north-west into the city centre.

High Street has quite a quirky mix of shops - some slightly seedy and others less so. There are antique shops, second-hand record stores, stores selling designer fashions, others selling herbal products, crystals and incense. 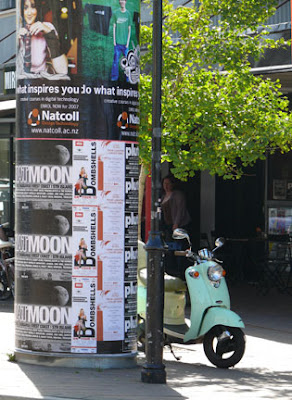 I was rather taken by the mint green motor scooter propped up against this bollard (is that the right word for it?). Behind it was a small cafe with tables and chairs on the pavement. The posters at the top advertise CPIT (seen in my previous post) and read "Do What Inspires You". 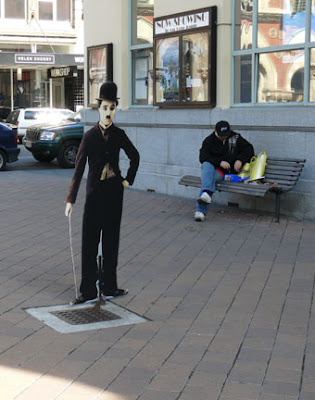 Charlie Chaplin stands outside a video store called "Alice in Videoland" or "Alice's" for short. Alice's is Christchurch's best store for alternative and foreign videos and DVDs although they do have mainstream movies as well.
Posted by Catherine at 10:03 pm

Catherine, what a great idea to walk to town and take all those photos and then use them for your blog. Talk about killing three birds with one stone! And I do like your eye for colour and shape. I think my favourite is the cricket game with the striped chairs lined up. There's something appealing and satisfying about it. And I like the colourful containers too. Looking forward to seeing what you've still got in store!
(BTW Caroline F. got in touch today - thanks for the recommendation.)

Do What Inspires You. We don't usually get time or chance for this but it's a good maxim when at all possible...!

I mean Cassandra F - what was I thinking; 'Caroline'? (I realized the next day that I'd written the wrong name - but have only just got back now to correct.) :)