Last Saturday, I took a long walk. This Saturday, I'm being domestic. It's a beautiful warm autumn day. I have two loads of laundry on the line. I'm getting my exercise by sweeping and mopping floors, vacuuming and generally tidying up. My pedometer broke months ago, but I'd guarantee that I've walked enough steps to get in my daily quote of exercise, and then some more. I'm enjoying little things. Like my new electric jug. It replaces the one given to us for a wedding present. That one was a fine long-lasting stainless steel jug, but it was built in the days before they came with a built-in shut off. Every so often I'd leave the room for a minute while it was boiling and forget to come back for a while - which resulted in a burnt-out element. This time I planned to replace the element, but I found that it would cost as much as a new jug. Furthermore the plug was no longer legal, so should the cord need replacing I wouldn't be able to. The new jugs come all in one. If the element goes, there's nothing to do but throw it out. I have deep reservations about this from an environmental point of view, but at least the jug turns itself off when it comes to the boil. Which means I am far less likely to return to a steam-filled kitchen and a burnt-out element.

Oh, and then there is drinking coffee from my favourite mug from Happy Hens.

In the meantime, here are more photos of last week's walk.

After High St, I arrived at Cathedral Square which is the centre of the city. There is an area in the city which is promoted as the "Cultural Precinct". It includes the cathedral, library, museum, art galleries and the historic tram which takes a tourist route around the central city. All these attractions were having an open day last Saturday, which was one of the reasons I went into the city. Of course, by the time I had got there I was getting tired! I estimate it would have been about a one hour walk, but I kept stopping to take photos and browse in shops, so I was on my feet for more than three hours.

This is the spire of the Anglican Cathedral. Usually they charge five dollars to climb the tower steps - there is a fantastic view from the top. Last Saturday it was free. I had planned to make the climb, but by the time I got there I looked up, listened to my feet talking to me, and decided "been there, done that". 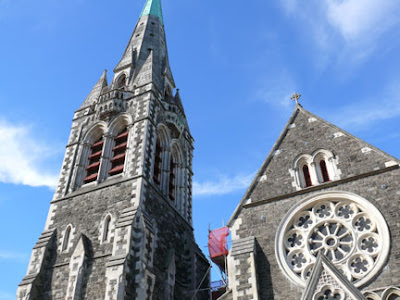 The various attractions of the Cultural Precinct were marked for the day by these huge red inflated balls. I was about to take a photo when the young girl came up to give it a push. (She did move it a few feet, though it was rather wisely tethered by a chain). 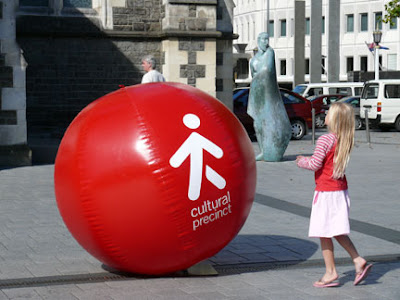 Often at the weekend there is a game of chess going on in the Square using these huge chess pieces. 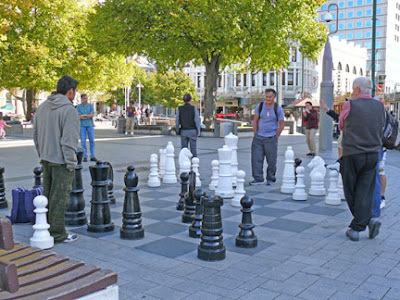 Almost at the end of my walk now - I will post the final few tomorrow and then I will have to think of something else to post about!
Posted by Catherine at 3:11 pm

Well, that's quite a beautiful walk. I'd like to walk it, but alas, here I stand in America. However, I'm planning a walk across America from sea to shining sea. 2010 and 2011. Wanna walk with me?

I walk about 5 miles a day, much more on Saturday. Much less on Sunday. Not too much this past week. My dentist got the best of me.

You have a nice joint here. I'll come back. Oh, I came from Michele's.

Hey-those chess pieces are great! Are they always there?In Leicester(UK)I'm afraid they'd get nicked or vandalised by the sneaky or drunken.Looks so avatar like those-very aggressive and gladitorial!

Intriged by your domestic stuff. You may have seen over on my site, I'm doing alot of thinking about all that stuff as am exploring gender stuff for my comission. When it actually comes to house work I tend to have a love hate relationship with it. Needs to be done, feel obligated to do it as a woman (if my house is a mess as one I still feel visitors will accept it less than they would from a man) and then again at the same time, sometimes also enjoy it...get illicit thrills from talk of hot towels and clean crocery and exciting new domestic products. Ah, housework. Bit like sex really!

That looks like it was a beautiful day. I love the giant chess board... it reminds me of a Mel Brooks movie.

An actual walk...from sea to shining sea. Delaware to California. Thanks for stopping by.

Hello Christchurch! I know much about you now.
Thanks Catherine.

I'm with that little girl - I wouldn't have been able to resist rolling one of those balls, just a little. :-)

Love the big chess board too! Fun photos, Catherine.

I believe you've managed to convey the essence of Christchurch in these photos - a great assortment. I enjoyed looking at the city through your eyes. More!!!!

That boiling pot thing, at what point does it decide the water's boiling (when it's boiling a little or a lot)? Do you set it at a certain temperature, or does it just shut off when it starts boiling? I wouldn't mind having one of those.

Your city looks beautiful. I would have to play chess with the big chess pieces.

Michele sent me to try and figure out what an electric jug is...I'm thinking something like a plug-in teapot...?

They don't have electric jugs in the US? Guess I don't speak American as well as I thought I did. Maybe they are called electric kettles over there?

thanks so much for the walk. it was nice to see things through your eyes and come along on such a lovely exploration!