They moved in a couple of years ago and since then they have been making themselves known by partying loudly all night. Yesterday I decided it was time to dob them in*. My son recorded an audio file on his laptop which I will burn to CD. Tomorrow it is going in the post to the New Zealand frog survey.

I've never actually seen them, as they turn quiet whenever I get near. But according to the frog survey website, it seems as if they may be brown tree frogs. These are an import from Australia - New Zealand native frogs are silent. The call of the brown tree frog is "a series of cricket-like trills and chirps". That sounds pretty much like what we hear. The website also reports that they do not compete with New Zealand frogs for food and habitat, and indeed may benefit them by reducing predation - so this is how we treat out Aussie neighbours! "Come over here and be eaten, to protect us."

I found a picture of the brown tree frog on this site. It is the cute little fella on the top right hand side. Lacking the opportunity to photograph the real thing, I am including a photo of a frog ornament I have, which looks quite similar.

*New Zealand slang for "report them to the appropriate authorities". 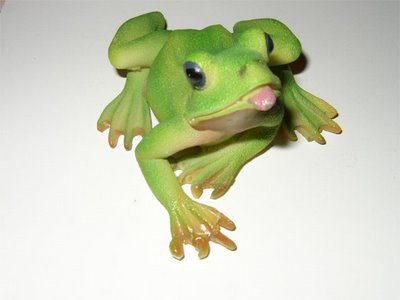 Posted by Catherine at 6:30 pm

Now if i ever come across the tiny bit of sea between NZ and AUS im going to be scared... what predators are chasing YOU... i might like to be prewarned before deciding to come over or not... haha...

Lucky for me being in the city here in Adelaide, i dont get many frogs. More Possums, feral cats and the occasional mice/rats than frogs i think.... but back on my farm, we had howling foxes, the feralist of feral cats and wild dogs that kept us busy... and of course the weekend 'chase the emu off the farm' or spotlighting(shootin expeditions to rid pests (mainly foxes, also roos (dog meat)and rabbits (if edible, we smoke them))

have an awesome week Catherine!

Aren't frogs just the cutest things? They were so prolific when we were kids - now quite rare. I do hear them around here too occassionally.

A frog survey! I've heard a few frog choruses and they can be annoyingly noisy. But the one in the photo looks cute.