Not that things don't change from day to day, but the changeability is part of the way things are, too. For instance, as we neared our home returning from the airport, we found a newly-placed sign on the corner advising the street was closed to through traffic - residents only. 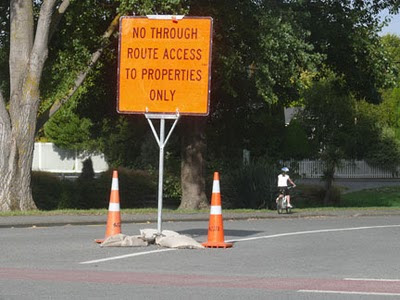 The street didn't look more dangerous than it was when we left. The next morning I found the reason - major construction work down at the other end of the street. It's not clear whether it is the bridge or perhaps the sewage pumping station that is being repaired.

And in our street blue piping has sprung up down both sides of the street. It appears to be a temporary fix to broken water pipes, diverting flow around the many leaks. 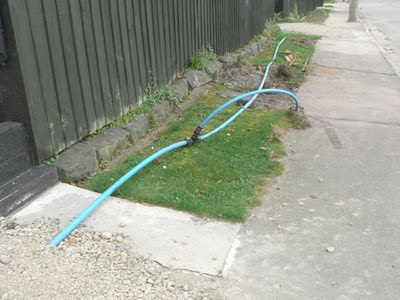 Today when I went to work I encountered a major traffic jam where there wasn't one before. The street was down to one lane. A "stop-go" man with his reversible sign let the queued traffic through first from one direction then the other. I'm happy to see it though as there is every evidence that this, and another badly damaged street in the area, are being rapidly repaired and will have a new, smooth surface in a couple of days time.

At work I collected my water bottles which a colleague, who lives in the country, had filled with clean artesian water. News reports are that the "boil water" restriction on the city supply may be lifted by the end of the month. Only because it will be chlorinated, though, giving it an unpleasant taste for drinking. I may keep fetching supplies from outside of the city for drinking, but the chore of boiling water for dishes will come to an end. I'm using the tap water for laundry, and washing, but keeping it away from faces - so it is bottled water for brushing teeth, and I haven't yet come to a satisfactory solution for washing dish cloths, face cloths and tea towels. I soaked them in a nappy (diaper) sanitising solution and hung them on the line without rinsing, but they came out smelling so nasty that I decided I need to find another way. Maybe I will just pile them up till the end of the month.

Another thing that happened while we were away was that a contractor repairing water pipes cut through a 66,000 volt electric cable. Consequently the south of the city (where I live) is reportedly "running on extension cords" and we have been requested to conserve electricity. The capacity is being severely stretched, and people are returning to the city as schools and work places start to reopen. There is a list of things that are OK to use - lights, computers, toasters, showers if short, and various others. There is another list of things that shouldn't be used at all - spa pools, heated towel rails, air conditioners for cooling, among others. A third list is of items that should be used "only when absolutely necessary". It includes electric heaters, ovens especially between 5 and 7 at night, stove top elements, irons, hair dryers. I'm a bit bemused. How do you define when use of an iron is "absolutely necessary"? When the clothes are crumpled? That's business as normal. When they are more than a certain amount crumpled? Only if you are leaving the house in said crumpled clothes? Or only if you have an audience with someone important like Prince William (who was in the city today)?

Tomorrow is a public holiday with a memorial service in Hagley Park. I've decided not to go, but more on that tomorrow, as this post is long enough already.
Posted by Catherine at 11:49 pm

the word verification is Snapergo
I feel obliged to comment! G. Snape!
It's good to get a report from you. with all that is happening elsewhere we are all so good at moving on to the naxt catastrophe don't you think.
Sorry that the restrictions are so many. Hope that you can cope and normalise your lives as soon as possible. Best wishes.
Geraldine

Glad life is slowly beginning to normalise. Glad you had a nice break from it all.