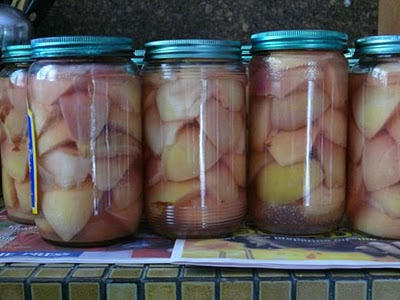 It felt strange this morning to get up and not have to go to work, it made me feel quite restless. I decided that it was OK to do a small load of laundry now that we have water back on, tidied up a bit and then drove the girls to the airport.
Later my brother came over to borrow my preserving kit. This is a large stainless steel waterbath with an electric element in it, and a tap on the side - it hadn't occurred to me, but it will be very suitable for boiling a large quantity of water (though it takes quite a long time to come to the boil) - so he can use it while we are away.

He also asked if he could bring over some laundry and have a shower, although I haven't had a shower myself yet (I've been washing in a small bowl of water) I said OK since he doesn't have water at all. But when he arrived I discovered the water was off again. It seems to go off every day while work is done on the pipes.

D works as a postie and had spent the morning checking out the routes in the hill suburbs, which have been badly hit, to see which were safe to deliver to. He had seen extensive damage, big modern houses which had just collapsed or split in two.

Talking about the waterbath reminded me that I had done some preserving a couple of days before the quake and there were sixteen jars of peaches sitting on the kitchen bench on the day of the quake, waiting until I was sure they had sealed properly before I removed the rings, rinsed off the sticky syrup from the outsides of the jars and put them away. (See photo above). I arrived home convinced that they would be smashed all over the kitchen floor, but not one of them had fallen. It all seems to be something to do with direction - I think they had moved towards the back of the bench while china in cupboards on the opposite side of the room had moved forwards, the doors had flung open and china had fallen on the floor and broken.

I noticed some of the stacks of china were leaning off kilter this evening so I unlocked the cupboard (which we locked after the quake to keep the doors from opening in aftershocks), Just as I straightened it up we were hit by a loud rumble - a 4.8 aftershock, the biggest for a while.

I'm looking forward to getting away for a break. The cordon around the central city is to be reduced slightly tomorrow, I wonder how things will be when I get back?

I noticed that my readership stats were up by 300% last week. There must be a better way to achieve that than an earthquake!
Posted by Catherine at 10:10 pm