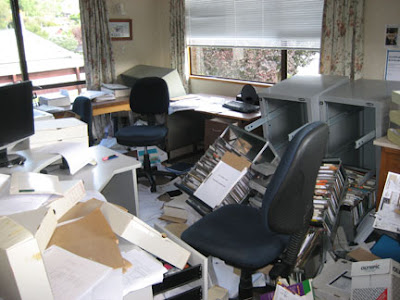 I thought I would start with this photo of my office taken before my boss and his wife started to tidy it up. The chair in the foreground is where I was sitting when the shaking started, I wasn't too worried at first as I tend to think "oh, another aftershock, it's a bit bigger this time". So the first thing I tend to do is put a hand on the monitor to steady it. Then all the file boxes started to fall down on my desk, and the filing cabinets behind me tipped out and the cabinets started to tip forward, at which point it seemed a really good idea to duck under the desk.
When it all stopped and my boss said "That's it. Go home" I actually wondered about tidying up because there was so much stuff on the floor I couldn't reach the door - in the end I just climbed over. I still didn't realise at that point just how bad it had been.

Today I worked half a day, it was supposed to be until 1 pm but by 12.30 we had both had enough. So I had lunch and set off on my errands - warrant of fitness for my car, foreign cash etc. At the bank I said "do you have any Aussie money?" and the teller looked worried and said she thought they might have run out, however she managed to find me some, all in $10 notes. We are leaving for a week in Norfolk Island on Sunday. Two of my daughters are going to Palmerston North while we are away. My brother has just returned from Wellington to go back to work as a postie. My cousin has gone to Queenstown. About 20% of the population of Timaru - a small town about two hours drive south - is from Christchurch at the moment. And in the worst hit areas of Christchurch about 40% of houses are empty. No wonder it was decided to cancel our census, due March 8th. It would have led to some very strange results. Some of these people will come back, others have had enough and have left town for good.

I have been trying out different routes to get from our side of the city to the less damaged northwest - dubbed "Shower City" because they have power, water and sewage all intact. I decided this time not to choose the nearest bank because the nearest open one for me is the nearest open one for about half the population. It made more sense to go a bit further and find one with shorter queues. In the car park about two thirds of the cars were bright and shiny, and one third were covered in fine dust. It was a hot windy day and by late afternoon my eyes were hot and itchy - more than I can ever remember them being. I wear glasses which should be some protection but I hear that wrap-around sunglasses are being recommended, as well as dust masks.

I took these photos on my way back home. 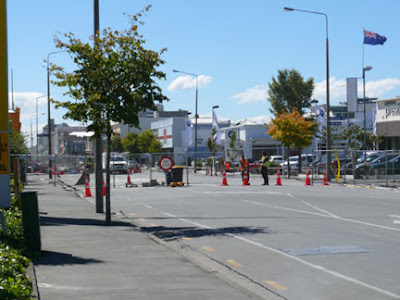 One of the cordons stopping people from entering the city - I feel sorry for these soldiers, it must have been hot boring work. You can just about get some glimpses of damaged buildings from here but it's not very clear. I didn't notice till I looked at the photos later that there is a flag in the photo, and it is at the top of the flagpole. All the other flags around town are flying at half mast. This one is inside the cordon and must have been like that since before the quake. 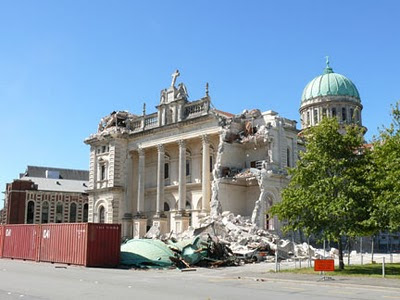 This is the Catholic Cathedral of the Blessed Sacrament just north of the cordon a couple of blocks from the first photo. When the soldiers saw I was taking pictures they said I could go closer, if escorted, so one of them walked the hundred yards or so up the street with me to directly opposite the cathedral, where I took the photo. I think they were bored with standing around and were glad of something to do. There are cordons within cordons - there is another just north of this and I'm pretty sure there was no way they were going to let me go any further, even if I'd asked.

When I got home I was on rabbit ferrying duty, as the pet rabbits are going to stay on my other daughter's back lawn while the two younger ones are out of town. Between delivering and setting up the hutch, and the second trip to transport the rabbits, we made a trip to the supermarket where we filled up the boot of the car with goods to take to the Food Centre in Aranui, a low income area on the badly affected east side of the city. The TV cameras haven't ventured here much - all the focus has been on the business district and the rescue effort there. But there are people still without power, water and sewage, and many of these people also have no transport and are ill-prepared to know what is going on and how to get help. Our donations were gratefully received and in return we were offered water, and bread, which we declined.
Posted by Catherine at 10:32 pm