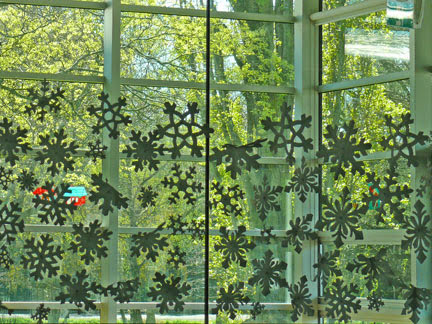 I am currently taking a four week poetry workshop series with Joanna Preston at the South City library. It is a beautiful modern library (albeit propped up with a lot of red steel girders since the 2011 earthquake, but that is another story). Both inside and outside are full of fresh green - the sofas and armchairs inside, the trees and grass outside. In contrast to the spring green, I was rather taken with these handcut paper snowflakes on the window that separates the meeting room from the main library. Two seasons at once.

Being strongly backlit, they were rather difficult to photograph. Somehow the eye manages to read them as crisp white, but the camera doesn't.
Posted by Catherine at 6:07 pm

I've been reading you in my blog reader feed ... but that doesn't show I've been reading you. I'm sorry :-( Today I wanted to comment. I don't know what kind of camera you're using but when you shoot into the light like that, you can use your Exposure Compensation setting (if you have that option) and move from the 0, where it should usually be set ... in the direction of the + settings. Try one, two and three clicks, until you get the white of the snowflakes. It's a useful thing to know. Let me know if you need to know more :-)